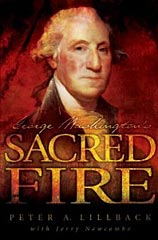 Author: Peter A. Lillback, President of the Westminster Theological Seminary

Blurb: “Dr. Lillback paints a picture of a man, who, faced with unprecedented challenges and circumstances, ultimately drew upon his persistent qualities of character — honesty, justice, equity, perseverence, piety, forgiveness, humility, and servant leadership, to become one of the most revered figures in world history.”

I’ve wasted what must be by now years of my life arguing with friends and enemies alike. Among the many subjects broached, politics, religion and sewing have been the most prominent and profound. (In 1993 an argument over the ethical use of sewing machines ended my first marriage. My wife at the time, a lazy and deeply disturbed woman of 29 years, insisted upon using a machine to stitch her homemade dresses which I demanded she wear at all times. It made it easier, she said, and faster. I lamented her decision to abandon the ways of her forebears, substituting dull mechanized efficiency for everything good and true in the human race. Today she lives in New Jersey, a punishment to fit the crime if ever there was one.) I’ve faced no argument more frequently than that put forth by the rabid anti-theists, Satan worshipers and “Wiccans,” really just a fancy word for nature-loving hippies, all of whom state that His Excellency George Washington was an atheist, or at least a deist. Not so, and now I can prove it beyond a doubt by citing this fine book.

Dr. Lillback makes extensive use of the Washington Scrolls discovered beneath the Intihuatana stone at Machu Picchu in 2003, supposedly written by a slave-comedian of Washington’s named Gershom. The Scrolls are punctuated with “King-Joaks,” but also provide ample evidence, including direct quotations, of Washington’s deep Christianity. He was what today we’d label a “fundamentalist Christian” but this label misses the point: Washington was a man who believed, rightly I think, that America was founded to be a Christian nation, indeed an empire of Christianity, and that we ought to have prayer before school, in school, and after school, and that Jeffersonian Jacobins, or liberals as it were, have no place in a decent Christian Republic. In this way I see Washington’s modern heir and chief spokesman as Glenn Beck. Indeed, to understand this one must merely watch Beck’s television show to see the large red white and blue poster displaying Washington’s magnanimous countenance, under which is the word FAITH printed large. Beck realizes the dangers of secular discourse in the late Republic, just as Washington alerted the citizenry to the vices of secularism in the early Republic, those days of mass prayer and cider mills long past.

It’s clear to me that Dr. Lillback has been watching Glenn Beck and has, perhaps, even learned something from the great man. George Washington’s Sacred Fire is a book all American schoolchildren should be forced to read after 8:00 Bible hour.

Peter believed in individual property rights. Why? Because the Ten Commandments, which you remember you said children aren’t allowed to read them any more in our schools. Our Supreme Court says they’re too dangerous. Well, they’re dangerous for socialistic government.

Also, the positive form of “Thou shall have no other gods before me” means Lillback must be cool with the Flying Spaghetti Monster, as long as it doesn’t cut in line.

nojo
7:00 am • Sunday • May 23, 2010
comment »
Choose Your Delusion
It Doesn’t Say Anything Here About Rubber Chickens Stinque Endorses….
20 Comments
Benedick

I don’t know what is more disturbing – that this is ranked #1, or that the reviewer divorced his wife over using a sewing machine.

@SanFranLefty: or that the reviewer divorced his wife over using a sewing machine because he insisted she wear only handmade dresses. That is srsly f*&ked….or a hilarious joke. “After 8:00 bible hour”? Glenn Beck as George Washington?

And for Xrist sake, who among us, aside from the Catlick schooled ones, ever read the 10 commandments in school? Public school, I mean, not that glorified day care of Ritz crackers and New Testament Illustrated some of us were forced to go to as chillen.

@SanFranLefty:
Probably in large part from massive church buys (those donations aren’t just for rent boys and keeping up in a lifestyle one grows accustomed too.) Borrowed from the L.Ron Hubbard school of manipulating book salves.

@Nabisco:
I thought it was 15 till Moses dropped one of the tablets.

@ManchuCandidate:
thank you for that mel brooks moment….
the one he dropped had the “thou shall not useth the sewing machine”

@SanFranLefty:
i’m going with the #1….i couldn’t even laugh before i saw you guys.
i was stunned. so i tuned into some Best of Glenn for amusement and found a great tidbit. glenn was sitting in front of james gandolfini
in a theater and turned to shake his hand. tony soprano responded with
“what is SATAN doing here?” HA!!

I think Amazon may want to look into adding this to their reviews. I mean, the review cited above is one reference to Obama being born in Kenya away from being a perfect teabag storm. :)

On the other hand, it could just be Poe’s Law in action again…

@Nabisco: Someone is wasting his satiric gifts on an Amazon review. The sewing machine should be the tip-off, but the fact it’s so easy to believe says something about Life in These United States.

@SanFranLefty: I think that review was either written by Glenn Beck or is an hilarious parody. If not, being divorced by that moran is the best thing that could happen to any woman.

Mr Cyn came across an Einstein quote that I think is appropriate here:
“Two things are infinite: the universe and
human stupidity; and I’m not sure about the universe.” ~Albert Einstein
It may be apocryphal, but it still rocks.

On the other hand: It was Cirque du Soleil.

@nojo: The New Jersey reference isn’t satiric. I’ve been there.

@baked: Well, the entire story is Beck’s to begin with. If you want Satan, you also get the apology.

@Dodgerblue: I don’t want to hear it. I had to live there.

@nojo:
funny he didn’t recall the apology til the next day.
you are a philosopher/journalist. and what you say is sound.
me? i want satan, no apology.
he remembered the apology the NEXT DAY? c’mon nojo, we’re talking about beck.
he would and does outright lie, twist, contort, and insult any intelligent thing listening to him. HE owes his kids an apology.
i vowed i would not answer you no matter what you said, but here i am.
i can’t help myself. i love to argue, you are a worthy opponent.

can i go back to just joking about how you hate me now? i don’t want to argue with YOU. i love you even though i know you hate me. there, all better.

@Dodgerblue: You know, here is something I want to tell you about New Jersey. Our gas station attendants do not have to hunker down in bullet-proof kiosks and take payments through a bank teller’s sliding drawer, and our 7-11 clerks don’t get robbed and shot.

I’m not kidding. Those crimes, convenience store and gas station robberies, don’t happen here. Not at all, not ever, I cannot recall the last one I ever read about one.

I lived in Florida for 10 years, gas station attendants did their work from bullet-proof little kiosks, because gas station robberies were so common, and being a 7-11 clerk was the most dangerous job imaginable.

My county has half a million people, we have maybe 5 murders a year, almost all are domestics.

We don’t have that desperate stupid criminality here. We do not have “stranger” violence, violent street crime, attacks by desperate criminals, strangers. Its so rare its amazing. We have violence between members of drug gangs, but thats not big, we have bank robberies, noone ever gets hurt, we have no burglaries, no muggings, no convenience store robberies, none.

Its not that bad a place, and we have nature, and pristine beaches, and its just not that bad, you know?

“This is the place you made so you could all be with each other.”
– from the Lost finale

@Promnight: We never lock the doors. I’m not even sure where the keys are. I often go to bed, now that it’s warmer, having left the sliders in my study wide open. All I really worry about is the fucking bear (I suspect a young male finding his territory) who keeps tearing down the $34 a pop Yankee Diddler bird feeder to get at the sunflower seed and tearing them to shit. When we shop we leave the car unlocked. The OH likes to leave the motor running just for the hell of it. This makes me nervous but that’s because I’m intrinsically working class and unused to the ways of the gentry.

I can’t imagine that we could live this way anywhere else. But I suppose that everywhere has these backwaters. I’m grateful to be living in one.

@redmanlaw: Hell is other people.

@nojo: SFL has a point, Newark is Hell, too.