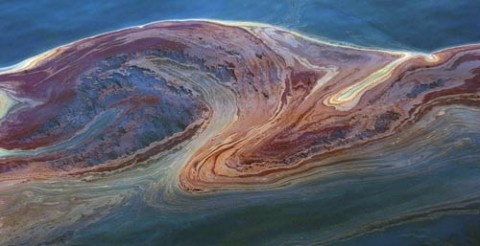 Sure, the Obama administration bears some responsibility for not reinstating the requirement for an acoustic cutoff switch for deep water oil rigs, but let us not forget that:

Dick Cheney’s secretive energy task force concluded that $500,000 for remote shutoff was simply too great a burden, and the former V.P. and his team didn’t want to force BP and other oil companies to spend the money.

Has anybody seen the MSM even mention this?

As the Wall Street Journal, reports, after a spill in 2000, the [Minerals Management Service] issued a safety notice saying that such a back-up device is “an essential component of a deepwater drilling system.” The industry pushed back in 2001, citing alleged doubts about the capacity of this type of system to provide a reliable emergency backup. By 2003, government regulators decided that the matter needed more study after commissioning a report that offered another, more honest reason: “acoustic systems are not recommended because they tend to be very costly.” I guess that depends on what they’re compared to.

The system costs about $500,000 per rig. BP is spending at least $5 million per day battling the spill, the well destroyed by the explosion is valued at $560 million, and estimated damages to fishing, tourism, and the environment already run into the billions.

Also, let us not forget the agency that was the MMS during the Bush administration:

The Minerals Management Service is the part of the Interior Department responsible for offshore drilling. Towards the end of the Clinton administration, MMS officials wanted rigs to have the acoustic shutoff switches, but by 2003, the agency had changed direction.

What happened in those three years? Well, for one thing, the MMS in the Bush/Cheney era became one of the most corrupt government agencies in American history. The Minerals Management Service proudly embraced an anything-goes atmosphere that led to literally Caligula-like corruption and debauchery — federal officials traded cocaine and sex for lucrative oil contracts, for example.

Have any of these federal officials been called on to testify before Congress? They need to be grilled.

Steve in Manhattan
10:30 am • Sunday • May 16, 2010
comment »
Choose Your Delusion
The Invisible Woman Douchebag of the Day
19 Comments
ManchuCandidate

What can’t Dick Cheney fuck up?

I’m not seeing any balance® here. As an independent voter and patriot® I need balance®. As I have learned from TV this is Obama’s Katrina. Where is Sean Penn in all this? I blame the unions. You liberals are so cold. Stop blaming America.

@Benedick: Hey, since it’s BP, we can blame the British as well.

Think about it – the next time you fill up on liquid Atlanteans, and drive off in your automobile

@blogenfreude: Couldn’t agree more. Bring it on! Personally I think they should all be rounded up, have their citizenship revoked and deported. Or at least put in FEMA camps.

If were VP you can bet we’d have been calling it Venezuelan Petroleum from the get-go.

Coming soon, to a police precinct near you: arresting people for not having ID while standing on their own porch

For some reason, I hear the faint sound of Sheriff Joe fapping when reading that article… ;)

(NYT) Scientists are finding enormous oil plumes in the deep waters of the Gulf of Mexico, including one as large as 10 miles long, 3 miles wide and 300 feet thick in spots. The discovery is fresh evidence that the leak from the broken undersea well could be substantially worse than estimates that the government and BP have given.

@blogenfreude: Fun facts about BP: original concern came out of first oil extraction in Iran, BP was formed after US America decided to rock the casbah and install the Shah in order to re-privatize all that black gold.

@Nabisco: Who could have predicted?

I’m just sick about this. I remember how the off-shore oil rigs ruined my drive down US 1. I was shocked to see them, and I remember thinking that an earthquake could really do some damage. How many are off the coast of CA? Horrible, ugly, dangerous things.

“They need to be grilled.” Literally. Spatchcocked and grilled.

i’ve been sick about it too. lynn, i have the barbecue sauce waiting.
i recover only by recalling the daily show, “jon, SOMEthing is trying to kill nawlins!

@al2o3cr:
i have a friend in in palm beach who was arrested for walking around HIS OWN HOUSE naked. seems a passer by with a young girl walked by saw him, and called the police.
florida is indeed a scary place. and i wouldn’t want to live in bed-stuy either.

@baked: Hey, you got RBG to show up! I was so confused – have to change my avatar back!

@SanFranLefty:
i’m so exited! i can’t see her yet. is she fuzzy?

@baked: She’s clear as a bell, although I mistook you for Lefty at first.

@JNOV:
YAY! i still see lefty’s bridge, and my sunrise.
wait–what? lefty stole ruthie from me?
i don’t see it, and i don’t believe it!!!

@Benedick: Of course, the lamestream media never noticed the obvious fact that all this corruption occurred exactly when ACORN’s influence was greatest. And clearly, Nancy Pelosi’s role in the disaster must be investigated.

@baked: I think Lefty was Ruthie last week. She’s back to the Golden Gate, and you’re Ruthie giving the bird or holding a pencil. It’s hard to tell.

@JNOV:
double bird salute!! found for me by Original Andrew. it only took me 2 weeks to get it up there! and i can’t see it. can’t wait. yes, we are nine years old.