Nobody Could Have Predicted … 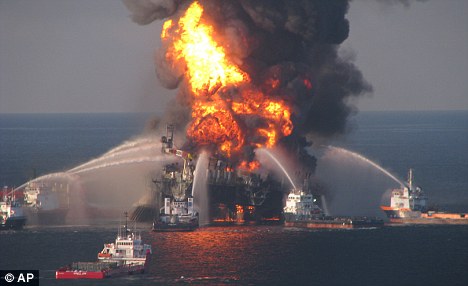 … that a large company, say an oil or coal company, would lie about the chance for a disaster or have no regard for their employees’ safety.

MOUTH OF THE MISSISSIPPI RIVER (AP) – British Petroleum once downplayed the possibility of a catastrophic accident at an offshore rig that exploded, causing the worst U.S. oil spill in decades along the Gulf Coast and endangering shoreline habitat.

In its 2009 exploration plan and environmental impact analysis for the well, BP suggested it was unlikely, or virtually impossible, for an accident to occur that would lead to a giant crude oil spill and serious damage to beaches, fish and mammals.

Steve in Manhattan
10:30 am • Sunday • May 2, 2010
comment »
Choose Your Delusion
The Graduates Douchebag of the Decade
4 Comments
FlyingChainSaw

Why should they have planned for an oil spill? The US is a third world country with nearly completely disused environmental laws. Bush appointed industry hacks who actively disparaged of regulation to heads of regulatory agencies. The states is exactly the kind of country that Larry Summers advocated first world countries use to dump their toxic wastes and develop industries too dangerous for a domestic venue.

If this slick reaches the gulf stream (and it probably will) then the rest of the world can thank BP too, including the UK.

Doing heck of a job, BP.

And who did the engineering work that is suspected to be the major cause of said explosion? Haliburton.

@ManchuCandidate and FlyingChainSaw: What are you talking about? According to Bobby Jindal, this is all Obama’s fault!
And per Rush & Beck, this is much worse than FEMA’s response to Hurricane Katrina, as Barack Hussein himself personally pulled the plug on the rig to get the oil to gush out so that the Mooslems could control all our oil supply.

@SanFranLefty: Yeah, they hate the federal government right up to the minute something goes wrong, then they’re screaming for the tax money from those of us in states that won’t permit offshore drilling to bail them out. It is both the administration’s fault and their problem to fix. BP and Halliburton? Innocent bystanders.
If it weren’t for the wildlife and the poor people whose livelihoods have been permanently destroyed–not to mention the loss of some really great beaches–I’d feel like Haley, Bobby, and the whole “drill baby drill” crowd got exactly what they deserve.