Can’t Sleep… Clown Will Eat Me… 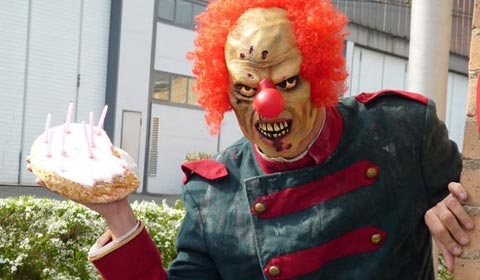 Our fact-checking for the following consists of desperately wanting it to be true:

He posts notes warning children they are being watched, telling them they will be attacked.

But Deville is not an escaped lunatic or some demonic monster.

He is a birthday treat, hired by mum and dad, and the ‘attack’ involves being splatted in the face with a cake.

‘The child feels more and more that it is being pursued,’ said Deville.

Oh, but “most kids absolutely love being scared senseless,” Deville explains, leaving us to wonder whether that last word was edited for publication. To the point, that kind of fright usually involves crossing some threshold, typically in the form of a ticket booth. Once inside, you know it’s just a bunch of Christian teens being lame.

Still, far be it from us to challenge Deville’s presumptions. After all, he had us at Evil Stalker Clown.

Evil Clown hired for stalking, threats and a pie in the face [Metro UK]

Was puzzled till I realized that we’re talking about the English. Hence the teeth, which are pretty good by English standards though I’m guessing that the nose is fake. Couldn’t try this kind of thing States side without getting blown away. Good thing, too. I’d quite like to go after him with a baseball bat. Whatever that is.

@Benedick: Are you one of the gazillions of USAmericans who was proudly “untaxed” by that evil IRS? Untaxed that is except for payroll, withholding, state, local, occupational, property and sales tax?

Cuz I am. Yep, if I close one eye and blur the vision in the other, it looks like Ma and I came out W1nn3rz!!!!

ADD: Clowns are creepy, no doubt. I know for a fact that kids like to get a little bit scared – think rollercoasters, or funhouses – but stalking? Not so much.

@Nabisco: I’m not employed except by self right now. So I don’t do payroll taxes directly. I’m proud to pay taxes because it means I’ve had a good year. I pay many other people besides the IRS – commissions, etc – and resent those payments much more. As for sales tax, lower then VAT and no paperwork.

That pie is appalling.

I would TOTALLY hire this guy to stalk my fellow college stoner friends when we were college stoners. I think he’d have a hard time hitting the target with them all cowering under the bed, though…