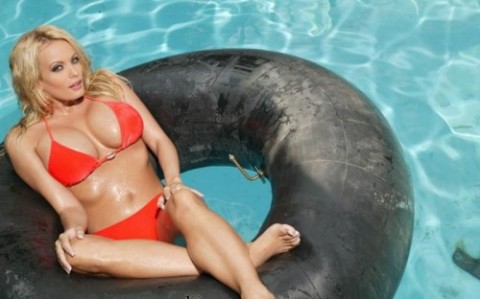 My pal oyster checks in from the SRLC in New Orleans:

Most importantly, there was no word yet on whether potential Senate candidate Stormy Daniels will make a surprise appearance at the conference. (Wild rumors were circulating yesterday that she wanted to meet Sarah Palin and perhaps lay some groundwork for an eventual endorsement.) Stormy recently made a highly publicized switch from the Democratic party to the Republican party in the wake of the embarrassing RNC/Voyeur club scandal.

Stormy is not enthralled by the steep cost of admission to the event, but that’s what voters like about her– her inherent frugality.

Plus, I’m sure there’s tons of undersexed men at a Republican conference, so you could casually mention your next adult film project:Filthy Bad Lieutenant: Port of Callgirls, New Orleans (which is still in development, as I understand it). Like the recently signed nuclear arms reduction pact with Russia, this appears to be a “win win” situation. But I wouldn’t recommend using that particular example.

If she runs, that means a primary contest with David Vitter.  And that needs to happen.  Give generously. I sent her forty bucks.

It seems that the Vitter forecast is cloudy with the threat of gimungo fake boobs looming and buckets of comedy.

@ManchuCandidate: I want him humiliated. I want his shrew wife to be hounded by the press. I want every hooker who ever did him to come forward and tell all. I want him Santorumed … beaten senseless by a Dem challenger (should he make it through the primary). I want him, and every “Christian” asshole in the Senate, gone. Without them, maybe we could save the world.

@blogenfreude:
Assholes like Vitter deserve it, but I don’t think he has any shame left. Most people get upset because there’s a photo of them with their fly open or something trivial like that. But he survives diapers?

Well, I owe him for a different matter. He has publicly stated that he wants to destroy non US America Universal HC (especially Canada City’s) by trying to bankrupt it. He should be slapped with a dirty diaper.

@ManchuCandidate: And Ensign, who has been shown to almost certainly have broken the law, is still running for another term. These fucking Christian conservatives – it’s that “The Family” we’re-better-than-anyone-else attitude.

Thank you for posting this photo. I’m at work, I have a headache — but I think Stormy could take care of these issues for me.