The Stupid … It Burns 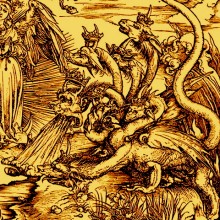 Every time I think it can’t get any worse:

NEW YORK – On the heels of health care, a new Harris poll reveals Republican attitudes about Obama: Two-thirds think he’s a socialist, 57 percent a Muslim—and 24 percent say “he may be the Antichrist.”

To anyone who thinks the end of the health-care vote means a return to civility, wake up.

Obama Derangement Syndrome—pathological hatred of the president posing as patriotism—has infected the Republican Party. Here’s new data to prove it:

67 percent of Republicans (and 40 percent of Americans overall) believe that Obama is a socialist.

The belief that Obama is a “domestic enemy” is widely held—a sign of trouble yet to come.

How long until the shooting starts?  As Boehner, McConnell, Limbaugh Pence, and the other agents of intolerance whip their orc followers into a frenzy over HCR, the time will come when some of them become unhinged and violent. It’s only a matter of time.

24% of GOPers Believe Obama’s the Antichrist [The Daily Beast]

DEVELOPING HARD: per TPM — Vitter introduces the first two amendments. (1) Repeal. (2) — and I shit you not — no funding for ACORN.

Vitter’s not exactly Mr. Current Affairs, is he? ACORN is dead, but Vitter just wants to make sure, I guess.

@chicago bureau:
Does he expect diapers to be covered under the new law?

only a matter of time. I honestly have thought that since the election.
sadly.

@chicago bureau: Does he want the Hindenberg grounded, too?

We must realize how fundamentally quasi-socialism has failed for our European brethren. It would be truly tragic if we had a social culture mindlessly miming the Norwegians, Dutch, Danish, Swedish, Germans, French, Finnish, Spanish…

They have such poor, un-freedom-filled lives in the totalitarian socialist dystopia that is Europe. I think we need to liberate them all with the shock and awe of unbridled US American Capitalism (tempered with a healthy dose of protection for US corporatist hegemony, of course).

Perhaps, if we really want to dominate the world, we can drop bombs on uppity populations who might challenge the almighty US Dollar as the default (defaulting?) reserve currency, not to mention the prime mechanism for exchanging carbon-based energy?

(Not that I believe the energy traders, much less any other globalist capitalists, have any allegiance to nationhood, which I don’t care about for totally different reasons.)

@Pedonator: I volunteer for the Dutch Liberation Army. Hmm, I luvs me that clipped Dutch accented English. Denmark is my fallback deployment, but only in summer. Danes are a lot more fun than Swedes.