There’s a Rap for That 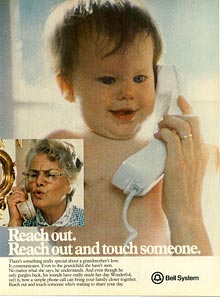 Kentucky, a state that rightly celebrates its proud traditions of drinking and gambling, isn’t as indulgent when it comes to teenagers enjoying themselves:

Under current law, teens caught sexting could be charged as felony sex offenders and, if convicted, would have to be registered on the state database.

This is manifestly absurd, which is why state Rep. Martha Jane King is working hard to strike the law from the books.

And replace it with another law:

According to HB 143, a teen charged with sexting would be punished in the juvenile justice system, where a judge could issue a $100 fine for first-time offenders, order community service and work with the child’s parents.

We know, we know — charging teenagers with a misdemeanor for iPorning themselves sends a dangerous message to Kentucky’s impressionable youth.

That’s why you would only catch a break with the first nekkid picture. The second one’s still a felony.

Will there be a “Hands Above The Covers” Law, too?

When it comes to sex, this is one public option that sucks.

That’s the American way: criminalize and pathologize normal adolescent behavior. God forbid if any of the kids are black or brown – then we really have to lock them up for life.

Before my inevitable slide to the bottom of the standings, can we all just take a moment to solemnly reflect that HF IS #1!!!!!!!!!!!!1!!!!! The Demon Dickheads beating the Texas Longhorns (which, everyone in Austin is too busy with SXSW anyway to care) sealed it for me. Usually one day of smug satisfaction is all I normally get, so I am going to take it for what it is worth. I look forward to shining all of your shoes.

@homofascist: I look forward to shining all of your shoes. At least they let you play, Generalissimo. Biscuit’s Baskets never got to fucking dance.

If they’re in jail, the kids won’t be able to go to their Kentucky school and learn about how Jesus walked with dinosaurs and our president was born in Indonesia. Stupid stupid stupid.

@Nabisco: All I can figure is you missed the deadline by a hair, but there’s always the second chance game (details coming soon).

And isn’t it sad that KY wants to enforce the same stupid rules as this place.

@blogenfreude: Those jailed kids will probably miss the field trips to the Creation Museum. One evening last summer my wife and I stood in line at Dairy Queen next to a whole family wearing brand new T-shirts from the place. It was all I could do to keep from laughing in their faces. Those poor children are so screwed.

The URML Lobos are still at the dance:

“The third-seeded Lobos (30-4) shook off a terrible first half and used a 17-0 second-half run to take control against 14th-seeded Montana (22-10) before holding off the Grizzlies 62-57. UNM will face Washington on Saturday for a spot in the East Regionals and the Sweet 16.

“The Ghost of Lobo NCAA Tournaments Past was rearing its ugly head the entire first half — and its present was being exposed. In the second half, it was as if infamous Lobo giant killers Santa Clara, Idaho State and Cal State Fullerton had joined forces with Montana to slap the Lobos in the head and rekindled the horror of the struggles of past Lobo teams in this event.

“But in the end, there he was — New Mexico senior Roman Martinez — draining two free throws with 13.5 seconds left to give the Lobos a five-point edge and finally end the madness of a crazy first day, in which five double-digit seeds advanced.”

It seems strange to get all uppity about sexting when your state abbreviation is a lubricant. Whenever I see it, it takes a moment for me to think “Kentucky” rather than “jelly.”

@Mistress Cynica: TRIVIA: Can you name the other state whose abbreviation is a lube?

Don’t run over the backs of a herd of hippos, and don’t write smack to the DA about how you kilt someone:

“Since I have already been indicted on first degree murder and the Va. Supreme Court said that I can’t be charged with capital murder again, I figured I would tell you the rest of what happened on Jan. 29, 1999, to show you how stupid all of y’all … are,” wrote Powell, who is white.

He said he had gone to the Reed house to confront Stacie for dating a black boyfriend. He admitted pinning the victim, threatening to rape her, then stabbing her in the heart when the girl resisted. He then stomped on her throat.

“I guess I forgot to mention these events when I was being questioned. Ha Ha!” he wrote in 2001. “Do you just hate yourself for being so stupid … and saving me?”

The killer also said that after that crime, he waited in the house until the younger girl returned from school, then attacked her, leaving her for dead. In the meantime, he drank iced tea from the family refrigerator and smoked a cigarette, part of the forensic evidence that investigators used to place Powell at the scene of the crime.

With this firsthand account from Powell, he was indicted again and charged with murder and attempted rape of Stacie — a capital-eligible crime. He again was convicted, and federal and state courts subsequently upheld the conviction on appeal.

Ol’ Sparky shall not be denied.

@redmanlaw: Just goes to show those prison law libraries only get you so far.

@homofascist: AZ? Whatever it is, it’s not the one my GYN uses.

@Mistress Cynica: @flippin eck: @mellbell: Hint: It is not named for a particularly sexy state. Although rather phallic. In its own way.

@mellbell: Think Florida. But after some Viagra.

@TJ/ Jamie Sommers /TJ: @ManchuCandidate: @mellbell: @flippin eck: @Mistress Cynica: That would be ID Lube, hopefully NOT inspired by the great state of Idaho. ID features five indents on the side perfect for gripping the bottle with your slippery fingers. Or so I have heard. Which I guess would make it an EZ Grip.

Perhaps Mellbell, Libertarian Bastard and I need a big bottle for the three-way we suddenly find ourselves in on the Stinque Bracqette.

Unless there’s a horse or a sheep on the bottle, it’s probably not inspired by Idaho. :)

@al2o3cr: Oh, but it helps you quickly stick your wanker through the gloryholes in the men’s bathroom at Terminal B of the Minneapolis-St. Paul Airport.

Re: brackets, I would just like to point out that I am, however temporarily, in the lead.

@mellbell: Yeah, I just like pretending that I was denied entry because of my awesome track record last year. Well, in the first round anyway. I truly have no idea who is even up or down in NCAA hoops these days. 24/7 cricket on the tube and all.

@mellbell: You are in the lead for the night – the rest of our picks are the same. You beat us on Gonzaga! DAMN YOU FLORIDA STATE!!!!!!!!! (i really don’t care, i just like the trash talking)

@Mistress Cynica and redmanlaw: Yes, but, OTOH, nothing like Texas death row stories to make you hate the death penalty. Really, is it asking too much to run the DNA of the guy on gurney against the DNA at the crime scene?

@homofascist: Wait, Gonzaga won? I finally picked a winner? I finally got one right? I guess I need to turn on the teevee and check on the Terps.