Stinque
Home Latest Comments Log in
If it smells, we’re on it.
Stinque
This is America.
Haiti 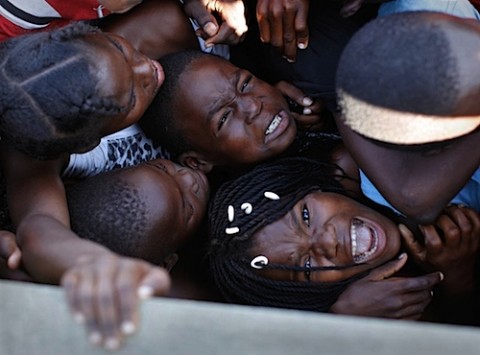 Donate if you can.

The Beeb article I linked to last night on the Surf Nazis thread said that the UN announced that from now on they are only going to let women come and pick up food at the food distribution spots. I don’t know if that will help things much – desperate starving women with starving kids could probably get violent pretty quickly.

I’m not normally a fan of the death penalty, but people like the yoyo linked above really make me question that. Abusing children in suburbia is bad enough, but to do it when they are faced with starvation if they leave? Fucking unbelievable.

A fantastic organization, Partners in Health today flew three severely injured Haitian children – including the 5 year old girl with tetanus in the AP article – to Children’s Hospital of Philadelphia via a private medical charter plane.

A friend who’s a journalist just landed there and posted “tense situation at airport. people crowded at fence — struggling to get supplies.”
Glad to hear the little girl got to a hospital. And Charlie Crist: I don’t want any of my tax dollars going to FL the next time you a-holes get hit by a hurricane. Sorry, done all I can.

@SanFranLefty: Firland.org is matching contributions to PIH until they reach $25K or until the end of Feb, whichever comes first. Good way to double your contribution.

The RMLs are sending money to help the Sioux is South Dakota, whose already fucked up situation was made worse by recent ice storms. They’re freezing in the dark up there without water, power, propane, etc. People are melting snow to flush the toilets, propane dealers have gas and won’t deliver if the customer is behind, caravans are forming to get people to clinics and dialysis.

@redmanlaw: Where can I donate?

@redmanlaw: oh, this so moral beacon of liberty and freedom, this USA, its sins dwarf almost every other colonizing group that settled a region with an indigenous, but less technologically advanced culture. Our genocide was worse than that of the nazis. We succeeded. The protestants are far more cruel than the catholics, the spanish, look at their colonies, 90 percent of the people in Mexico, the Phillipines, are still mexicans, and phillipinos, still the same people who lived there before, I see Aztec and Maya faces every day, among those who have moved here for work. But the US, where are the native americans here in the US? Still living on the concentration camps, a tiny proportion of our population. Is it not true, that for any of us, if we see a native american, they are far far more likely to be native americans from mexico and central america, than a native american from what is now the US? In my state, so many place names, names of rivers, are from the Lenni Lenape, the Delaware, but where are they? Gone completely, utterly. Wiped out and destroyed.

@redmanlaw: I echo Bloggie – any good nonprofits you can point us to, or are you just sending money to someone you know? My cousin’s boyfriend did Teach for America for two years on the big rez up there – judging from his photos and description, it sounded like the only spot in the US that might match it for oppressive squalor is the Rio Grande Valley colonias.

@Mistress Cynica: Good to know. I’m donating to them and UNICEF beyond the hurt point, at least I realized when I got my credit card bill earlier this week. I decided to cancel my Sunday NYT subscription as a tradeoff.

We’re donating directly to the tribe. Tribes are tax exempt entities so you can write it off at the end of the year. I can get you a cite you can take to your tax preparer for that.

Landreaux was resting Friday when police officers knocked on her door.

“We only had one candle,” Landreaux said. Working in the dim light, she hastily packed a few items before the officers took her to the hospital where patients gathered.

Landreaux’s husband is home with five grandchildren and only the kitchen stove to provide heat.

Well, at least they’re getting solar-powered talking Bibles! Those’ll fill their hungry bellies and soothe them as they die from infection, thirst, starvation, violence, human trafficking…

speaking of children in need, I JUST GOT A JOB !!!
brand new orphanage opening up next month about a mile from me.
just got a call that my background check was approved!

in addition to a puppy, i may also be bringing home a homeless baby……..
and it’s all good with RB, babies, children, dogs. whatever i want.
making up for being a RB has it’s rewards.

@redmanlaw: Jesus, that’s terrible. Thanks for the info.

@baked: Congrats. I assume they don’t do pee tests?

@JNOV:
check your FB inbox, i picked out my stuff.
do you people know there is a stitch called the “faggot” stitch?
i’m appalled.
oh, and i’m not getting paid for my orphnage job…my pay is the joy of being with and helping kids.
i scored the swing shift. 3 til 8. so i get to help with homework, dinner and bedtime. i can’t wait!

@baked: Also, re adoption, they do know you’re a gay man, right?

@redmanlaw: Thanks for the links. I hadn’t seen this reported.