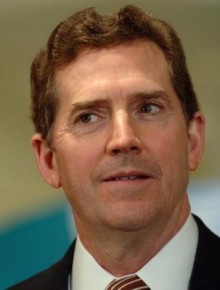 Having been one of Congress’s most ardent opponents of climate change legislation for years, Inhofe wants the top spot.

“I should have been number one,” Inhofe told KFAQ radio in Tulsa (audio here.) “I guess [Warren] Buffet has a lot more money so he went first.”

Inhofe could care less whether his fellow Oklahomans roast in the sun before having their homes washed away.  Similarly, Senator Jim DeMint:

“I’m swinging on this [healthcare] issue,” DeMint said in an interview. “If I can stop a government takeover, I will. . . . It’s not personal. It’s not political. It’s about stopping a bad policy.”

At the Heritage Foundation in Washington on Monday night, the senator signed copies of his new book, “Saving Freedom: We Can Stop America’s Slide into Socialism,” and received a hero’s welcome. Edwin J. Feulner, president of the conservative think tank, introduced him by saying: “DeMint may be the junior senator from South Carolina, but here we call him the senior senator from the Heritage Foundation.”

Of course, DeMint’s constituents would benefit greatly from a public option, given that:

South Carolina is reeling from the economic recession and a 12-percent unemployment rate. About 700,000 of the state’s residents are uninsured, and Democratic leaders here say no health-care reform would come at too great a price.

Instead, DeMint and other politicians, mostly in the GOP, actively work to damage their own constituents.  They scream and holler about cap-and-trade, health reform, cash for clunkers, stimulus money for their state (often while bragging about benefits they voted against), and gleefully vote to kill and impoverish the very people that voted them in.

And no, I haven’t forgotten Holy Joe (D-Israel), who has waged a 15-year battle against healthcare reform.

So my question: What the fuck is wrong with these politicians?  I think we know the answer: They’re sociopaths. The bigger question, of course: Is there a way to get states like Alabama, Arizona, Georgia, Idaho, Louisiana, Mississippi, Oklahoma, South Carolina, South Dakota, Utah and the rest, to stop sending sociopaths to the Congress? How does the GOP get these people to vote against their own interest, and why is it working?

This is an important question, because if we don’t do something about climate change, your neighborhood will flood just like that two-time Bush voter’s. If there’s no healthcare reform, your premiums will go up even more — if you can get insurance at all — whether you voted for Obama or not. If we can’t convince the populations of these (mostly) red states to send people to Congress who will work in their interest to solve the problems we have, we’re finished.

gleefully vote to kill and impoverish the very people that voted them in.

well
I doubt that most of the people in his state who really need help voted for him. but IF they did they totally deserve it.
IMO

I was cynical before this last election but since then it has gotten out of hand. I am starting to think none of us deserve to survive.

Q: Is there a way to get states like Alabama, Arizona, Georgia, Idaho, Louisiana, Mississippi, Oklahoma, South Carolina, South Dakota, Utah and the rest, to stop sending sociopaths to the Congress?

A: The Georgia solution is to carpet bomb all locations outside of Atlanta and Savannah. The rest of the state is beyond fucktarded hope.