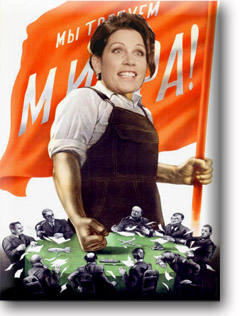 Guess who loves Joseph Stalin more than she loves Jesus? That’s right, the website Truthdig has revealed that, even as she rails against government spending on social programs, GOP wundernut Muchelle Bachmann has been pulling in a pretty penny from U.S. Government agricultural subsidies:

That’s right: government redistribution of wealth is good for me, bad for thee. You start wondering whether hypocrisy is a requirement for membership in the GOP, or if it just develops naturally after years of pissing on working class families while telling them it’s raining.

(Via Crooks and Liars)

The extra dairy products and corn would just have gone to poor people anyway. Better to keep them off the market and let malnutrition take its course.

Uhhh, hate to go all Grammar Queen here what with everyone having eggnog hangovers, but can someone fix the headline? Kthxbai.

@SanFranLefty: Done and done. Look, I did something at Stinque! (sorry y’all. I love and miss you)

@homofascist: Hey darling!! Is Santa bringing you a cute boy under your tree this year?

@mellbell: Speaking of Russia, is it just me or is Talibunny wearing a Stalinesque hat?

@SanFranLefty:
Looks more Castro to me.

@SanFranLefty:
a little frightening how well that suits her isnt it.

is that a Prayer Cross she has around her neck?

TJ: Obama women and Bo at Children’s Hospital. That Sasha is going to be a handful by her teens…

@SanFranLefty: What an ungrateful asshole. I mean, who named her the Talibunny and put her on the map? The least she could do is ban me for godsakes.

@FlyingChainSaw: Well, there’s the small detail that her handlers don’t know what the mysterious FCS looks like. Love that she holds an event at a federally-funded public venue with locally-funded police and she’s able to turn away people who she thinks are mean to her.

@SanFranLefty: Is it just my ‘magination, or is that a new face she is sporting there? With a sharper chin, and more prominent cheekbones?

@Prommie: Perhaps. I was distracted by the Charlie’s Angels hairstyle.

Hell, her career prior to running for congress was as a baby-farmer; she had 23 foster children, duh, you get from $585 to $699 a month for a foster kid in Minnesota, in poorer areas of my state, its a serious income strategy.

@Prommie: I think she lost some weight. I was noticing something different too.

Raw Story calls her a welfare queen in their story on this.

@mellbell: While I was sick the week before last, I got to see the two-part WW2 movie “Why We Fight” on the Soviet Union, directed by Robert Capra. Lots of love for the USSR back in the day.

@redmanlaw: USSR had what, 20 times the military casualties that the US did? Plus many millions of civilian casualties.

@Prommie: Did she just house the 23 in a barn and feed them corn mash and use the money to buy middle-shelf liquor and gigolo dwarfs?

Bachtard is no spring chicken. Some of the foster kids must be grown up enough to be interviewed and to reveal the full horror of the psycho’s face-biting personality to the world. What’s the alternative weekly in Minnesota? Be worth having their editors place an ad in the paper asking former Bachtard foster kids to come forward and tell their stories.

@Capt Howdy: You see there, the thing these conservatards really despise us for, at least these psuedo-intellectual conservatards with their Star Trek philosophizing, is that we supposedly believe in the “perfectability” of mankind, or humanity, I should say, Ellen Degeneris is included.

This appears to be the strongest current candidate in the conservative movement’s eternal quest for that moral justification for greed thing.

Humans are not perfectable, so their logic goes, and therefore it is naive and quixotic to try to perfect them, and therefore, devil take the hindmost, every man for himself (and here, since I am tracing conservative philosophy, I mean “man,” for the women, the conservative would say that they should make themselves as attractive and sexually accomodating as possible, so as to attract a rich and powerful protector-owner). Its a variant of making the perfect the enemy of the good, and is essentially a restatement within a more specific context of one of the Teachings of Homer, in which he advises Bart “Can’t win, don’t try.”

It makes a kind of sense, accepting the various false premises it is based on.

TJ: Check out the cover of Texas Monthly for the 2010 Bum Steer Awards.

Teachings of Homer
heh
didnt expect the name Bart to be in the next sentence. but I should have.

you know what always bugged me about Star Trek TNG? (full disclosure, shameless Trekie here)
the idea of a society without any form of currency. it makes no sense to me and you can tell that even in the series they have trouble writing around the concept. so many of our basic motivations are based on currency.

@Capt Howdy: I think the most well-known of the Teachings of Homer is that set of three rules known as The Code of the Schoolyard: always make fun of people who are different; don’t snitch; and never, ever, say anything, unless you are absolutely sure everyone else thinks exactly the same way yopu do.”

Then there are “The Three Phrases That Will Get You Through Life: 1. Cover for me; 2. Oh, great idea, boss; 3. It was like that when I got here.

@Capt Howdy: Star Trek seemed to be trying to have it both ways. On the one hand the Federation was a society of material abundance so everyone was free to follow their own muse and never worry about the rent or groceries or lack of medical care. On the other hand the only Federation characters we saw were a glittering array of captains and admirals and high-level bureaucrats and officers. I don’t ever recall seeing the person responsible for cleaning out a clogged toilet or the person who mopped the floors or washed the windows.

The closest characters to Everyman were the infamous security red-shirts who died like flies in the original series. None ever lived long enough for there to be any back story.

@Dave H:
That and the fact that villains could go against the grain and be won over with simple reason and compassion. Wimpiest villains ever.

Just one more, because it has to be said again: “Lisa, if you don’t like your job you don’t strike. You just go in every day and do it really half-assed. That’s the American way.”

@Dave H:
yeah
when they pick someone up from another time line or whatever they always say something like “we can choose to better ourselves any way we want”.
I dont ever remember someone saying I want to better myself by cleaning the toilets.

and I think the reason for the absence of much back story is because outside the ship it is really really hard to write one that makes sense.

WYTHEVILLE, Va. – Authorities in Wytheville (WITH-vill) are dealing with a hostage situation at the town’s post office, and Virginia State Police have responded with a SWAT team and bomb technician.

Mayor Trent Crewe says five hostages are inside the building, including three employees and two customers. Shots have been fired, but Crewe says no injuries have been reported.

The situation began at about 2:30 p.m. on Wednesday. The suspect has not been identified.

A state police spokeswoman confirmed the shooting, but could not confirm whether the situation involves the threat of explosives.

@SanFranLefty: Gah, I hate it when magazines hide most of their content behind subscriber walls. If I had a subscription, I wouldn’t need to read it online, would I? And I would still subscribe if they hadn’t raised the price for out-of-staters after I got away with a dirt cheap subscription the first year. Whatever, Texas Monthly. The good people at Borders don’t give a shit if I sit there all day reading without paying.

Also, would you look at the be-gelled manscapers in the Rodeo ad? WTF happened to country music?

@Capt Howdy: Also, no Jews or gays. Those “problems” have apparently been fixed by the 24th century.

@Dodgerblue:
the wonders of genetic engineering

@redmanlaw:
got a good chuckle out of this from a right wing review of Avatar

I don’t understand the weird need of our artist class to figuratively beg forgiveness for the alleged sins of their ancestors. Cameron, give the damn aliens some casinos and call it a day.

@Capt Howdy: Man, that movie sucked dead donkey balls on a hot day. Cameron should have his camera taken away from him.

I stopped subscribing to TM years ago – I thought it got pretty bad around 1997 or 1998 when they got on a Shrub love-fest. But it’s a tradition – I still buy the Bum Steer issue every December from BookPeople and the KGSR live tracks album from Waterloo Records, even when I don’t go to Tejas, thanks to the miracles of The Tubez.

@Capt Howdy: the idea of a society without any form of currency

@Prommie: AP sez the hostage-taking gunman is in a wheelchair and is demanding pizza.

@SanFranLefty: Stupid fuck. They’ll drug the pizza. Still he should let them dose him. If he is unconscious they won’t vaporize his head with a sniper’s bullet.