And Your Little Dog, Too 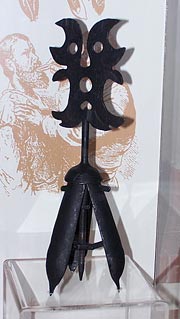 Donations to find a cure for cancer should not be used to pay the salary of former insurance and drug lobbyist Hadassah Lieberman, wife of Senator Joe Lieberman (I-CT), who is pledging to kill health care reform while millions go untreated.

Hamsher, a three-time breast cancer survivor, lays out a complicated case against Susan B. Komen Foundation spokesperson Hadassah Lieberman: that she “has worked for the insurance-pharmaceutical-lobbying complex”; that “she has used her association with her husband the Senator” to score cushy consulting gigs; that “the death of health care reform will no doubt please the clients of Hadassah Lieberman’s lobbying firms”; that “the drugs that are developed by the Komen money are being put out of the financial reach of average middle class women by Hadassah Lieberman’s lobbying firms”; that “the Komen Foundation focuses its resources on developing treatments that increase the profitability of pharmaceutical companies like the ones that employ Mrs. Lieberman rather than prevention”.

These are substantial charges, the merits of which we won’t judge here. But if Hamsher has a case, it should be pursued on its own terms.

Unfortunately, Hamsher presents it as payback for Joe Lieberman’s recalcitrance on healthcare reform. Which strikes us as profoundly petty.

Jane, please: If you think you have Hadassah nailed, by all means go for it. But keep Droopy out of it. We enjoy wingnut histrionics about the Thuggish Left a lot more when they don’t have a grain of truth.

Calling on James Denton, Ellen DeGeneres and Other Stars: No More “Race for the Cure” Cancer Money to Hadassah Lieberman [Firedoglake]

the Komen Foundation focuses its resources on developing treatments that increase the profitability of pharmaceutical companies like the ones that employ Mrs. Lieberman rather than prevention

This strikes me as a rather specious argument. Is the charge that the Komen foundation focuses on developing treatments for cancer rather than a vaccine for cancer? I’m sure the pharmaceutical industry would benefit from both.

That said, everything about Joe Lieberman stinks to high hell, and the fact that his wife is a pharma quasi-lobbyist even as he works to kill health insurance reform just adds to the nasty smell.

Lieberman is the worst kind of politician: 100% beholden to corporate interests, whether it be the usurious credit card industry, Wall Street or the health insurance industry.

joe…a disgrace to humanity and judiasm. no comment from hadassah, or joe (L, israel) about the latest in the susan g. koman foundation:

there is a big conference coming up sponsored by koman organizers in egypt. a big deal international affair. the israeli oncologists and researchers were psyched to be going and they just got UNinvited. the entire israeli team, leaders in cancer research–NOT invited.
jewish susan koman is spinning.

On a purely cynical level, Barry, Bad Boyfriend Baucus and the rest of the Demrat Blue balls can point to Joe and use him as the REASON why the change was neutered instead of it being a group effort.

My take is that Joe knew he had to fall on his sword for his masters and is going to be handsomely rewarded by his Big HC buddies with a plush lobbying/execubot gig when Conn finally does the right thing and kick his ass out in 2012.

I’m betting a lot of people who supported JoeLie over Lamont are either in “I told you so” appeaser mode ordeeply regretting it (and maybe both.)

Its too bad they killed that chimp that ate the lady’s face, it was already in Connecticut, conveniently located.

@baked: Oh, well, you know, with all the advanced medical breakthroughs coming out of the the arab countries all these years, they probably thought they have it covered.

Doesn’t everyone from around the world head straight to Egypt when they are really sick, so that they can be treated by those crack Egyptian doctors?

@Prommie: Actually, Gazans go to Egypt when they need anything more surgically complicated than an appendix removal. I have a friend who has been trying to get out of Gaza and into Egypt for a second round of heart surgery but Hamas has his name on a list and will not let him go.

It’s a little rich for people in a country with immense resources to sneer at a much smaller, less advantaged country, especially when the former is ranked 72 in “level of health” and the latter is ranked 43.

That being said, regardless of what aspect of the “fight against breast cancer” the Komen Foundation involves itself in, it deserves to be embarrassed for having Lieberman’s wife on its board.

Who else is on the board? If I was the organizing and organized type, I’d be exposing them individually as well.

@karen marie: Wealth brings with it the diseases of excess.

I sure am glad I didn’t bring up the arab states’ dismal record when it comes to space exploration.

Ahh, JoeLie. He reminds me of Lucy Van Pelt, and the Democrats are Charlie Brown trusting that just this time the football won’t be pulled away at the last minute. Not to mix Sport metaphors, but he keeps moving the goal posts down the field. Dems have better luck in working with Olympia Snowe and Susan Collins to get 60 votes, and should tell Lieberman to go fuck himself and quit and go work for Big Pharma already.

@karen marie: Komen Foundation perpetuates the infantilizing pinkwashing of breast cancer, encouraging corporations and big pharma to slap a pink ribbon on shit and donate pennies to breast cancer research, rather than focus on the fact that the women most likely to die of breast cancer in this country are low-income and women of color without insurance who live in polluted communities. Then again, I’m a little pissed about this because last week the State of California had to end the Breast and Cervical Cancer Treatment Program, which provided breast and cervical cancer diagnosis and treatment to women without health insurance, but who make too much money to qualify for Medi-Cal.

My problem with Komen is that their focus on breast cancer, while noble, kind of sucks all the air (not to mention money) out of the room, leaving other leading causes of cancer deaths among women (including the leading cause, lung cancer) marginalized.

Hey, TJ, are the teabaggers dead? Is that at least over? They were planning to take over the senate office building today, weren’t they, and stage a die-in? Seems to have fizzled.

@Prommie:
To borrow a phrase from a comic book:
Nothing Never Ends.

From what I understand it’s an Uncibil (sic) war in the Teabagger ranks. All that rugged individualism doesn’t build a cohesive organized team.

Either that or just let Droopy draft the legislation to suit his campaign needs. It is, as I have said before, half measures that doom us in the end. If they are going to sell us out, they should do it whole hog.

@mellbell:
I wish I were that clever and knowledgeable.

@mellbell: I cannot decide if you are our Oscar Wilde or Dorothy Parker. A combination, and taller.

@Prommie: I decided to ignore the Die-In (except for today’s vague Stinque Tweet), but yes, apparently a bust. If you’re gonna channel Populist Rage, best not to do it on a weekday.