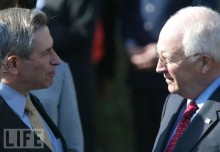 Yet both Deputy Defense Secretary Paul Wolfowitz and Vice President Dick Cheney, Farmer says, provided palpably false versions that touted the military’s readiness to shoot down United 93 before it could hit Washington. Planes were never in place to intercept it. By the time the Northeast Air Defense Sector had been informed of the hijacking, United 93 had already crashed. Farmer scrutinizes F.A.A. and Norad rec­ords to provide irrefragable evidence that a day after a Sept. 17 White House briefing, both agencies suddenly altered their chronologies to produce a coherent timeline and story that “fit together nicely with the account provided publicly by Deputy Defense Secretary Wolfowitz and Vice President Cheney.”
Farmer further observes that the Bush administration wrongly asserted that the chain of command functioned on 9/11; that President Bush issued an authorization to shoot down hijacked commercial flights; and that top officials at F.A.A. headquarters coordinated their actions with the military. Farmer’s verdict: “History should record that whether through unprecedented administrative incompetence or orchestrated mendacity, the American people were misled about the nation’s response to the 9/11 attacks.”

“whether through unprecedented administrative incompetence or orchestrated mendacity, the American people were misled about the nation’s response to the 9/11 attacks” — my vote is for both.

Indeed – the former before the attacks, and the latter afterwards to cover up the existence of the former.

You’ll find a similar set of circumstances around most of the favorite targets of the various conspiracy memes; for instance, the Pearl Harbor argument, or the assassination of JFK. In both cases, an awful lot of official stonewalling eventually comes down to CYA rather than some secret plan.

Actually, I’ve always thought the “global conspiracy” (pick your variant) idea was reassuring – after all, if *somebody’s* in charge, they must have a plan that’s a little better than “let everything fall to shit for no reason”. The alternative, that nobody is in control, seems to terrify a lot of people.

@al2o3cr: that’s my guess: life is a random walk. Do some good while you can.

@Dodgerblue: And to piggy back on this wisdom, tomorrow I start week two of ‘how to deal with dangerous randomness while trying to do some good’.

@Just Nabisco: I heard an NPR story this morning about an Iraq war vet who was injured by a car bomb while on duty and now, stateside, can’t walk by a line of cars without freaking out. Thanks to our former chimp-in-chief.

So when the fuck do you call it is: treason? When do you convict these fuckers and sentence them to a life sentence of laying face up under a dugout outhouse and living in a perpetual hot lunch?

@al2o3cr: I don’t subscribe to the theory that everything is grandly orchestrated by some omnipotent conspiracy of the global elite. I don’t have much invested in the Pearl Harbor or JFK conspiracy theories, but I do find the mainstream mediated version of 9-11 to be laughable.

after all, if *somebody’s* in charge, they must have a plan that’s a little better than “let everything fall to shit for no reason”

It’s not that somebody is in charge, it’s that a whole bunch of oligarchical bodies are in charge, and the in the Great Games played between them we are but pawns.

9/11 has always seemed a lot like the Pearl Harbor situation to me, and not just because of the actions afterwards. In both cases, the respective presidents claimed that the attack was “unexpected”, in spite of clear evidence that it was, at least, something that should have been thought of by the contingency planners. For example, the Bushies trotted out the “nobody had ever thought of using airliners as weapons” line a few times – but even the Columbine killers had described the basic MO of the 9/11 attacks in their diaries, years before.

Similarly, a hard look at some of the other factors (the failure of the Echelon system and related communications intercepts at NSA to detect plotters discussing the plan on HOTMAIL, for instance) shows an intelligence and defense bureaucracy that had grown both complacent and inefficient. In lying to cover things like that up, the PTB make it look like they have something more to hide than just their own incompetence, even if they don’t.

As for the Great Games idea, I still think that’s optimistic. If there’s a game, there needs to be a habitable planet for the winner to end up living on. I’m not convinced that any of the “players” are actually thinking at that scale, and that’s more terrifying than black helicopters any day… :)

@al2o3cr: I guess I’m just cynical enough to think the Players in the Great Games don’t really care whether a habitable planet is left for the rest of us — or even their own children — after they collect their winnings.

And it’s probable that many of them are so saturated with self-esteem and entitlement that they can’t conceive of any system in which they and theirs do not occupy the top tier of the food chain / scala naturae — including the system of ecocide.

It was a morbidly mild night in Sandy Eggo. Like almost every incessant tepid night in the city built upon the desert with water diverted from hundreds of miles away.