Stinque
Home Latest Comments Log in
If it smells, we’re on it.
Stinque
Assholes, they do vex us.
Meet the New Boss

According to the New York Times, the U.S. economy showed a 3.5% expansion in the 3rd quarter of this year, after more than a year of contraction. 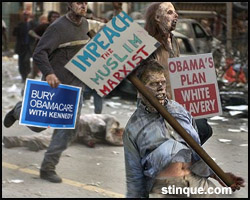 What this means is that, despite the best efforts of Rush Limbaugh, Fox News, the GOP and its Teabag Zombie army, America likely will succeed and may even prosper in the 21st century. The worldwide economic collapse that Conservatives were counting on to overturn civil society and install a Theocratic Fundamentalist Christian government modeled on the Taliban has been averted, and prepubescent boys can now breathe a sigh of relief. Their molestation at the hands of Republican apparatchicks will not be sanctioned and covered up by the  High Priests of the New Christian Judiciary that was slated to replace the Supreme Court. And women will still be allowed to vote, as well as hold paying jobs. We may even see real health care reform that does not consist of a new focus on faith healing.

No, we’re not out of the woods yet, but the briars and vines are definitely thinning ahead.

What will they do with all the ammo they bought?

A bullet and a suppository have much the same shape. So I’ve got an idea…

I hate to rain on any parades here (because the right will certainly make this point as well) but the economy under a given administration seems to be mostly the result of the previous administration’s work. There are of course exceptions, but it took Shrub years to fuck up Clinton’s work (excepting the interruption of some well-timed airplane/building interactions), and it’s likewise going to take Hopey years to undo Bunnypants’ fine work.

Any bets on how long it takes the Rethugs to claim credit for this? Nevermind that they’ve blamed the last two quarters on Obama, this is clearly the result of Bush’s superior leadership back in Q4’08… :)

@IanJ: The stronger point is that jobs have yet to recover. But right now the socialist is doing fine by the capitalists.

@ManchuCandidate: It’s going on sale in the want ads at retail, so they aren’t making any money off their panic buying and hording. They’ll be eating the credit card interest, too, if they used the plastic. Ammo once again graces the selves of my fave little gun shop here in Santa Fe, although I still have not seen any primers for reloading come back yet. You can get a 50-round box of budget 9mm 115 gr FMJ from Turkey or Russia now for about $12 USD, whereas it was about $18-$22 during the height of Teabaggery, if you could even find any.

@redmanlaw: T/J: 2 people shot at a synagogue in Van Nuys, a suburb of Los Angeles right near where I grew up. Shooter captured on security video is described by the cops as a “male black.” Well, that narrows it down.

@Dodgerblue: I thought “North Hollywood” was the less Valley-sounding way of describing southern Van Nuys. Hopefully this was an isolated incident.

@SanFranLefty: Every politico in town was at the morning press conference near the synagogue. The site is about 10 miles from where several people, including a Filipino-American mail carrier, were killed a few years ago by an anti-Semitic, racist wack job who has now, conveniently, recanted his ugly views from his prison cell.

We’re not even close to terminal velocity, much less seeing real growth based on real industrial expansion and heading into anything that could be called prosperity. We’re halfway through the first trough – the home real estate Ponzi meltdown and seeing the beginning of the credit card and commercial real estate meltdowns. The third trough – replacing the industrial base that was frittered away by Wall Street abuse will be the longest and the states’ management of which will determine if it has a future as an industrial and world power, not that the latter is a good thing necessarily but having a state department with commercial legates who answer the phone when you need them comes in handy on occasion.

I’m wondering if channeling Clement Attlee might be needed right about now.

It’ll be a real knee-slapper if we have a W-shaped Depression.

Ronald Reagan had a gift for respecting political opponents, for being their friend and never diminish them. He had a heart of tolerance and respect for others. He wasn’t and inquisitor and never used paranoia in politics against others.

TheWeek.com
The GOP dumps the Gipper
Mired in anger and vituperation, seemingly hell-bent on becoming asmall-tent faction rather than a big-tent governing party, Republicans have betrayed the leader they ritually canonize. The GOP is now the party of malaise.

By Robert Shrum
Shrum has been a senior adviser to the Gore 2000 presidential campaign, the campaign of Israeli Prime Minister Ehud Barak, and the British Labour Party. In addition to being the chief strategist for the 2004 Kerry-Edwards campaign,
This is one of my most preferred Editorialists.
November 2, 2009

The GOP dumps the Gipper

Even while bending history in a different direction, Reagan more frequently quoted FDR and JFK than any conservative predecessor.
……………….

Similarly, Reagan the enemy of government was a world-class deficit spender and pump primer. He gave lip service to balancing the budget, and called for a constitutional amendment to require it. But while he was assailing spending, he was spending away — and the economy was growing. Today’s GOP, confronted with the greatest economic crisis since the Great Depression, robotically demands spending cuts. Reagan might have appreciated the rhetoric, but he never pursued the policy.

He was even more pragmatic on national security. When his intervention in Lebanon culminated in the bombing of the American barracks in Beirut and the death of 241 marines, he promptly withdrew. In 2009, the GOP is demanding massive troop escalation in Afghanistan without any consideration of the contours, merit or workability of the mission.

In his 1980 debate with Carter, Reagan had to reassure voters that he wasn’t trigger-happy — and he pledged that yes, indeed, he would negotiate with the Soviets. He more than meant it. To the consternation of his own advisers, he proposed the abolition of nuclear weapons at a 1986 summit with Mikhail Gorbachev; to their relief, the idea foundered on the rocks of Reagan’s refusal to give up missile defense. Nonetheless, he persisted in his belief that he could negotiate a deal with the Soviet Union; the great Cold Warrior dispensed with his own certitudes to became a great peacemaker.

Today’s Republicans, by contrast, resist every negotiation. They contend that talking is a sign of weakness — and that Obama is naïve to renew Reagan’s goal of nuclear disarmament. From Guantanamo to North Korea to Iran, the GOP is the party of Cheney, not Reagan.

Watching the Political Circus from a Liberal Perspective of Youth and Minorities :

@vicenteduq: If you’re just going to keep spamming us with boilerplate, self-serving links, and consonant-deprived domain names, I may have to take action.

nojo: Yeah. What you said.