Stinque
Home Latest Comments Log in
If it smells, we’re on it.
Stinque
Cassandra was right.
Developing Hard 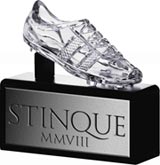 First: you remember that guy who threw his shoes at Dubya?  He’s out of the clink.  No word on whether he was picked up by his brother, driving a used police car.

Second: you know that other party in Japan that got beat more than the Washington Generals?  Looks like they — the Democratic Party of Japan — have laid an ass-whuppin’ on the Liberal Democrats.  And now, let’s meet our next contestant, and Johnny will tell us about him!  [“He’s a industrial efficiency expert who loves to watch baseball!  Meet Yukio Hatoyama!” (Applause.)]

Muntadhar spends eight months on ice, and Cheney gets another network berth to brag about being a war criminal.

The DPJ has said it will shift the focus of government from supporting corporations to helping consumers and workers.

Wow, they have real Democrats.

My Japanese gf is very surprised, and pleased.

@blogenfreude: You have a Japanese girlfriend? Are you Jewish?

@Dodgerblue: It’s not like Bloggie finds those Maru videos all by himself.

@blogenfreude: Interesting. The Bu-Jew combination is powerful here in L.A.

@SanFranLefty:
I didn’t think my lack of respect for Today could grow any more till now.

Wasn’t she just supposed to be a teacher?

@ManchuCandidate: And what was it that she was to teach?

@SanFranLefty: Hey, I appreciate the Giants actually playing hard against the Rockies. For a change.

@blogenfreude: There’s a kid here adopted out of Guatemala who is being raised in the Jewish faith by his dad.

SFL: I almost posted the Jenna story, in case anyone hadn’t barfed yet today.

@Mistress Cynica: Barbara’s the smart(er) one, while Jenna is the fall down drunk one who married some shithead not too long ago, right?

@redmanlaw: I spend a few days around Bend, Oregon last week, and visited the High Desert Museum there. The Museum has a wing devoted to the the pre-European locals, and man, did they ever take it in the shorts from the federal and state governments. Not just the usual treaty-breaking, but a full-on effort to destroy the tribes’ legal status, abolish the reservations, assimilate the people into the cash economy and wipe out their culture.

@redmanlaw: I thought they were both always shitfaced. Given how fucked up they always were there is likely a sex tape of one or both, hopefully with barnyard animals, somewhere waiting to launch through the intertubes.

@Dodgerblue: I always wondered why no one wrote a science fiction account of a native American Indian traveling back in time to deliver Hueys, Gatling guns and napalm to pre-Columbian Indians.

@FlyingChainSaw: Give RML and you and Dodger a long weekend in Santa Fe with a case of gin, and that book would be written.

@Dodgerblue: I tell people here that the Pueblo Indians got it really good compared to our brethren elsewhere. I have a book I think is called Genocide of the American Indian in Northern California. Villages on bluffs above rivers were taken down by miners training high power hoses on the cliffs, making them tumble into the water, etc. In contrast, our property rights established under Spanish law were later recognized by the Treaty of Guadalupe Hildago. Because we were not nomadic and had (at least on the surface) adopted Catholicism, there was actually some debate over whether we were Indians or not.

“The Indians known as “Pueblo Indians” are not Indians in the contemplation of the Indian Intercourse Act, but are citizens of the United States and of the State of New Mexico.

“It is clear from a careful study of the Spanish laws that the Indians, meaning the Pueblo Indians, as distinct from the “savages” or “Indios Barbaros,” were entitled, under the law, to own and control property both real and personal, and subject to certain restrictions, could sell and dispose of the same.

“Under the Mexican Government the Pueblo Indians were full fledged citizens upon an equality with all other citizens of the Mexican republic.”

@FlyingChainSaw: Have you read “Guns, Germs and Steel” by Jared Diamond? He was perplexed about how Cortez and a couple soccer teams worth of guys could have conquered the Aztec empire. Having the advantages in technology, murderous ideology and organization, once the Europeans got the advantage in numbers it was a hugely uphill fight for the locals.

@redmanlaw: The Mexican/Spanish Californios didn’t put up much of a fight in the Mexican-American war. The so-called “Battle of Cahuenga Pass” involved a few shells being fired and then the Californios gave up after losing a donkey. There’s a historical marker there today, near where the Hollywood Freeway passes by Universal City. For Alta California, the Treaty of Guadelupe-Hidalgo confirmed what was already the situation on the ground.

@Dodgerblue: See, but the Espanish also hooked up with everybody who hated the Aztecs, which was basically everyone in Mexico but the Aztecs.

“Say, homes, you want to take out the Aztecs?”

“Fuck, yeah, bro. They killed my cousin. Where do we sign up?”

I was working on a church restoration project over at Picuris Pueblo with others from my old firm. After we were done the Pueblo cats showed us where their brass church bell, about 300 years old or so, was dented from a Spanish cannon ball from when the village got shelled in the 1700s or whatever.

@Dodgerblue: Yes, made me sad I didn’t pursue contacts in Papua in another life. Closest I ever got was northern Cape York in Queensland. Did you see Diamond is in hot water for doing a bad imitation of a non-fiction writer? Bunch of natives after him for portraying them as bloodthirsty revengeniks, suing his ass in NY court and got the story pulled from New Yorker and aggregator databases like Lexis. Hilarious and dumb, given that in GGS he describes the Papuans as the most adept and aware folks he’d ever encountered.

@redmanlaw: Yeah, they mined the neighbors for human sacrifices, ripping their hearts out and shit. This wasn’t like, oh, yeah, they stole my cousin’s bike, let’s noogie ’em. . .

@FlyingChainSaw: Payback is a bitch.

@Dodgerblue: Re Cortez and the Aztecs. I went to the museum in Mexico City. There one can see the very beautiful Aztec war cloaks made of feathers and the appalling suits of steel armor the Spaniards had.

He came dancing across the water, Cortez. Cortez

@Dodgerblue: and one of the few from his songbook that I can get through without too much fumbling on chord transitions. Wish I had an electric gitar to try it out on….