Nightmares from My Father 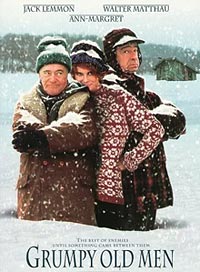 Destined to join Stuff On My Cat and Stuff White People Like in Internet immortality is the hot new Twitter feed, Shit My Dad Says. Written by 28-year-old Justin about his 73-year-old father, it reads like an undiscovered Walter Matthau movie:

Our 76-year-old father sounds nothing like that. For which we should probably feel blessed.

Let me know if he gets compared to the family dog. My parents loved doing that, especially in terms of loyalty and obedience. For the record, the dog won.

Actually, sometimes I wish my dad did say shit like that rather than “you went to college to do what exactly?”

Oh, great. Another thing that’s going to get a book deal, while my self-published book languishes on Amazon. Apparently I must stop trying to write so well, and just have other people speak, write or send me pictures of stuff.

Deep Thought: David Sedaris is not as funny as I think he thinks he is.

@RomeGirl: The only way a woman can get a book published in U.S. ‘Merika these days seems to be by having a litter of children and/or star in a reality show.

@SanFranLefty:
Or write about (gay) mormon vampires who won’t have sex with hot chaste Xtian gurls and who play fight with werewolves.

@SanFranLefty: Or a sex tape … there’s always that.

@blogenfreude:
Or get knocked up by a hockey player in the midst of a political campaign.

@ManchuCandidate: Wouldn’t that be more a Canadian thing?

Hey guys, having a weird problem. Having no trouble commenting here, but in the “Douchebag of the Day” post it doesn’t recognize that I’m logged in.

@Serolf Divad: No problem here, and nothing different in the post settings.

I’ll sometimes get arbitrarily logged out, for no consistent reason — nothing as simple as restarting the browser causing it. Only solution is to log in again.

@Serolf Divad: Something similar happened to me last weekend. It clearly said LOGGED IN AS LYNNLIGHTFOOT but when I previewed my comment it called me ANONYMOUS and said I had to log in. Y’all were spared a long disquisition of mine on corporal punishment and some threadjack topic close to my heart that I can no longer recall.

@lynnlightfoot: When I go long with a comment, I’m now in the habit of copying it out for safety. It’s insulting to get logged out of your own blog, but it happens.

I don’t tweet but I think my Dad would fuckin’ love it!

The blog hates me… ever since I said it had fat thighs.

I am going to follow this dude with the quickness!

@RomeGirl: Oh, great. Another thing that’s going to get a book deal

In Justin Halpern’s case, moving from Los Angeles to his parents’ house in San Diego planted the seeds for a Twitter page that’s quickly growing into an Internet phenomenon, attracting offers from literary agents and book publishers.