Cindy Sheehan Vacations with the Presidents 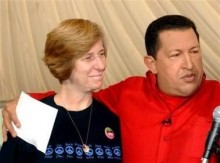 Remember Cindy Sheehan?  She was Joe the Plumber before Joe the Plumber, way back in 2005, when it was kind of a novelty for some unschooled nobody to get national attention by following the president around acting like a douche.

Anyway, she’s going to Martha’s Vineyard, for the beaches, and the publicity.  According to Sheehan, “We need to give the president the moral backbone he needs”  Well, I’m sure that sending a stalkery attention whore after him and his vacationing family will do the trick.  Of course, since it’s slow news August, this will likely corner the media market for the “unhinged asshole” story of the week.  Joe Plumber, New Hampshire Gun Nut Guy, Arizona Assault Rifle Guy, and Sarah Palin will be very envious.  But, to be safe, Sheehan should probably come armed with an IED, just to ensure she gets on the TV. Since the most visible nutcases are right wingers these days, she’s going to have to do something to appeal to that sentiment. As the Washington Examiner points out, “even the left wing of the Democratic party seems unconcerned with the wars in Iraq and Afghanistan these days.” Yes, let’s talk about birth certificates, Nazi Islamosocialist health care Death Tribunals, and assault rifles instead.

Marcel Parcells
9:46 am • Tuesday • August 25, 2009
comment »
Choose Your Delusion
The Zen of Eric Holder Douchebag of the Day
38 Comments
Prommie

It wouldn’t be right to call Sheehan a ‘tard, because, well, she is retarded. What is to be feared is that she will establish another “Camp Casey” collection of commietards, could you just see them streaming into Edgartown from the ferry?

@Prommie: This is the Vineyard! They won’t tolerate that kind of rabble! Maybe that shit will fly in the Hamptons . . .

Do these wingnuts (of either stripe) have day jobs? How the fuck do they support themselves?

If they need something to do, why don’t they get a hobby, like fencing or needlepoint, or go volunteer at the library?

/asks someone going off to work at 7 am

it’s good to know that wingnut welfare exists in some form on both sides. now, when we have the lefty equivalent of Jonah Goldberg, we’ll know we’ve reached some equality here.

@SanFranLefty: They’re too busy worrying about Barry’s peen to have jobs. (I don’t know if anyone else posted this, but I figured I would anyway.)

@rptrcub: JAYSUS AHCHEY CHRISTO ON A POPSICLE STICK, WHAT THE FUCK IS WRONG WITH THESE PEOPLE?!?!?

And, they are such morons they don’t realize that Muslims circumcise all baby boys? So if the Unicorn is uncut wouldn’t that undercut (so to speak) their “He’s a Mooslem from Africa” meme?

@rptrcub: @SanFranLefty: Let’s not all rush to the punchline…

Excuse me while I whip this out.

@SanFranLefty: @rptrcub: Of course, the real question on their minds: “iz it twoo what zey say about your people–zat you are…gifted?”

@Mistress Cynica: Shelly Oh! seems to always have a glow to her.

We ain’t in Havana, baby!

@rptrcub: For the record, there were no staff mohels at Eugene’s Catholic-affiliated hospital in 1959.

And as a footnote, I’ll never look at Yoda Pez the same way again.

@Marcel Parcells: Thank God no one demanded to see Bush’s unit, as microscopic as it probably is.

@rptrcub: Bush’s unit + discharge = easiest set up for a double entendre in a long while.

@SanFranLefty: Making her the chief of staff. amirite?

@The Nabisco Quiver: Shit. We’re gonna have to pay overtime today to our studio drummer.

All snark aside, I really don’t understand this intense hatred of Cindy Sheehan.

She is not a wingnut or the so-called Left’s pre-Joe da Plumah.

She had some very legitimate questions and demands, especially regarding the death of her son in Iraq, that as far as I know, no one ever bothered to answer.

She received a lot of attention for this at a time when the establishment media labeled anyone who disagreed with Preznit Caligutard & VP Vader as mentally ill. Does the fact that she had the spotlight for awhile and tried to use it make her a fame whore?

Suppose by some bizarre twist of fate that one of us got some national attention; wouldn’t we be immediately denigrated and attacked no matter how legitimate our viewpoint may be?

Aren’t we just modern day Cassandras–insignificant, statistical outliers in our nation’s deranged political scene–who’re constantly screaming the truth only to be ignored by the overwhelmingly dumbfuck, where-can-we-get-more-placebos majority?

Isn’t that the definition of what it means to be a liberal in AmeriKKKa today?

@SanFranLefty: BO should just offer out the neocon/wingnut cabal to show up at a hard-on contest.

@Original Andrew: She was great when she was just a simple person, a mother, just saying “Hey, your lies killed my son.” And she was the only human being criticizing Bush back in those days, that was when Bill Mahr was summarily cancelled, and the Dixie Chicks were lynched, for refusing to bathe in Iraqi blood.

But she has been played the puppet now by the whackiest of commie-tards, and when she tries to speak on politics and international relations she is right there with Palin in her command of the issues and how articulate she is. In other words, she got embarrassing.

I wouldn’t object to a tasteful viewing of the First Penis.

Why would Cindy have to take an IUD with her? I’m pretty sure she’s past the fertile period in her life….

It would have to be lit correctly, while a boys choir softly sang “Hail to the Chief” in the background.

@Original Andrew: Me too. Her son is dead, and for what?

@Original Andrew: I don’t either. She is 140 lbs of pure grief. I saw a picture of the lady who runs that Atlas Tit-fuck Me psychoconservative blog who’d snuck into a peace fest and sidled up to Sheehan, smiled and flipped the finger for the camera. Monstrous. How could anyone shit on a parent losing a kid like that and not realize they’re crapping on just everything that makes us human, or even mammals?

@FlyingChainSaw: Romanticizing animals, you, FCS? What makes us inhuman to each other is our heritage as troop animals. We is loyal to our group, we have instinctive revulsion to harming a member of our group (except as a necessary concommitent to our equally instinctive constant urge to define dominance order within the the group). But we also have an instinctive hatred of outsiders to our group, and we have no such compunctions about harming outsiders.

We are programmed, because we are animals with millions of years of genetic behavioral programming still within us, to be social animals, and support and help other members of the social group. But those social groups were small, and always in fierce competition for survival with other troops, other groups, and we have no instinct to be “human” to them.

Its codified in law and in the mores of our society, its Okay to fly airplanes over members of other groups, such as Iraqis, and rain indiscriminate flaming death on them. We give people medals for that. But if one of us should murder a person we identify as one of “us”, we throw them in prison.

The development of ‘civilization,” the increasing civility of humankind, is simply the expanding of the definition of “us.” The more people we regard as “one of us,” the fewer people we feel entitled to kill and rape.

The typical fucknut pigfucker is always ready to nuke any other nation on earth, the Iraqis, the French, anyone who they are annoyed with, because they don’t regard those people as members of their simian troop.

The more civilized and progressive among us simply regard a much larger number of fellow humans as members of Our Group.

The only difference is in how inclusive their definition of “us” is. How big the group they are willing to give human status to is.

“Citizens of the world” regard everyone in their world as one of them, and their rules of civility extend to all humans. “White Christian Alabamans” tend to regard only other white christian alabamans as worthy of respect.

Its all just who you define as human.

@Promnight: Reminds me of a classic Peanuts line, fromwhen CB was more ‘tudeh master than blockhead:

Upon reflection, that may have been Linus…

@Promnight: PM, thanks for the news but, no, I wasn’t romanticizing animals – just sitting in wonder at the Atlas Titfuck-Me Blog lady who found it humorous to shit on a really very sad and shattered lady. I mean even I, the FCS, would feel bad for a second before pouring a gallon of jet fuel down Caligutard’s gullet, lighting it and playing Roman candle with the debauched monster.

Does it make me a bad person that I thought of how funny it would be to watch Rush Limbaugh get cockslapped by Obama?

Yep, “cockslapped”. It’s a word – the Urban Dictionary says so!

we are all lucy. my favorite peanuts strip, cut out so long ago, yellowed in it’s laminate:

linus: are there more good people in the world, or bad people?
charlie: who’s to say who is a good person or a bad person?
lucy: I WILL !!

@baked: I, alas, identified with Charlie Brown growing up. Still do — this entire site is an extended meditation on Good Grief.

@nojo:
and you will understand why my first declared major was philosophy.
so we’re here because of…..charles schultz?

@JNOV: Not surprising, but still damn sad. What a life and what an impact.