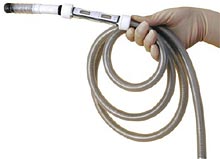 Talk-show host Sean Hannity, a vocal opponent of Barack Obama’s policies, said today he would not rule out a bid for the presidency in 2012…

“I’ve never made a decision in my life without — whatever destiny God has you’ve got to fulfill it,” he said. “I’m not sure that’s my destiny.”

Um yeah, it would be amazing cause RW radio talk show hosts are the apex of intelligence, wisdom and thought out policies.

Yeah, as Talibunny’s veep. I can see the ads now. Hannity splayed face first over the bumper of a pickup, pants gathered around his ankles. Talibunny standing on milkcrates with a strap-on plunging into his asshole shouting “SIEG!” and, in perfect cadence, Hannity answering “HEIL!”

@Serolf Divad: Can you imagine? All those shows over all those years – you could make attack ads that would last until the end of time.

Lots of folks thought Fred Thompson was a fine, serious, exciting candidate. Why not Hannity? As mentioned above, it wouldn’t be too hard to run against him. If the GOP fields a clowncar of primary candidates like they did this time around, he could be a contender. I’m keeping my fingers crossed.