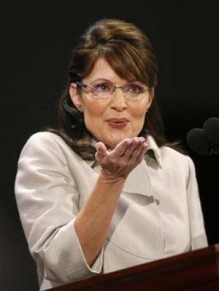 But will it last?

It’s been five entire days since Sarah Palin ceased being an elected official, and her fans are restless, the AP reports. “Sarah can you give us just a hint!” pleaded one Facebook follower. Said another: “Sarah, our country really NEEDS YOU NOW!!!” Palin promised to launch her next chapter on social networking sites, but so far the world hasn’t heard a tweet from her.

Maybe she should set up an Oregon Compound where she can milk her followers for money while being chauffeured in a gold Rolls asher followers beat each other senseless to gain favor or be showered in dust from her Rolls.

Other benefits include Todd impregnating all the women with the “special” Palin seed. Getting clothes from Neiman. Supplying hair for the balding Talibunny. Carrying Trig from Neiman to Neiman. Greeting other with You Betchya and a wink. “The leader is good, the leader is grate! She’ll be preznit of the universe at this rate!”

The folks in the compound will end up biding their time till the rapture or Talibunny gets bored of it all and quits.

Nabisco Quiver and the Melody

But she’s going to do radio.

Send her to eastern Washington instead. Then we can start dreaming up “Palin Goes Palouse” headlines.

TJ/ Mrs RML’s paper is losing 12 positions this afternoon. The Reaper has already been through advertising, design, and one other department. Newsroom (where Mrs RML is at) gets hit this afternoon.

Nabisco Quiver and the Melody

@Nabisco Quiver and the Melody, blogenfreude: Thanks, guys. I recommended that she leave more than two years ago when things first started going to hell, but she’s wired only for daily, competitive journalism. Since then the economy crashed and even state employment has dried up, so there’s really no other acceptable options for her, except maybe teaching. I don’t remind her of what I said back then, and listen quietly every few weeks as I hear about who got cut, their families, and the slugs, deadwood and executives that stay on.

Prayers are with you guys. Let us know as soon as you find out.

@redmanlaw: Shit. I rant about the Inevitable Decline of Newspapers now and then, but it still means we’re losing good people who do good work, with no guarantee that whatever eventually emerges will fill the void.

DC will never be hurting for journalists; it’s local communities that will suffer.

@ManchuCandidate: Manchu is right, founding a religion is the way to go for her.

She is, amazingly, too dumb and incoherent to make a living in entertainment, either TV or Radio, just too fucking stupid.

But that won’t be an impediment if she wants to found a cult. There’s nothing on earth much stupider than scientology, or mormonism, and you notice, you get a new one of these things each century? The 21st century’s new cult is starting right at the beginning.

@redmanlaw: Shudder. Splash some rams blood on the lintle of her door, or something.

@redmanlaw: Well, you are still near a city with enough rich and famous people to build a paparazzi and celebrity feature editorial practice. Actually, it would be weird to approach an editorial enterprise such as that like a journalist. “Hey, hey, the plans for the house has a sub-basement with drainage. Why shouldn’t we believe it is an S&M chamber? Oh, really? Oh? Since when do bottles need air conditioning and since when do you drink wine? Name the largest wine growing region in New South Wales? BEEP! Times up you sick fuck. Can we get a picture of you with you leather suit?” Let’s hope you don’t have to fit out the homestead with a new home office until she’s ready to start a new gig.

@redmanlaw:
I understand her situation well. Friends of mine told me to quit my job, but despite it all, I enjoyed the work and the people.

I’ve said this for a long time about work: in many cases, the worst thing they can do is keep you.

The day of reckoning is happening where I work. Last week, my ass and the rest of my division got sold off to the Swedes.

As for the slugs and deadwood, their day comes but only when everyone else has been thrown over the side.

@FlyingChainSaw: She’s already been a People magazine correspondent based here in Santa Fe . She covered the Runaway Bride, Julia Roberts’ wedding, the first group of Iraq War POWs that included Jessica Lynch and the late Lori Piestewa, Jessica Simpson making “Employee of the Month” here, etc. until she got sick of chasing celebs.

@ManchuCandidate: So you gottqa commute to Stockholm? Ironically, she was always trying me to quit my job when I was an associate and become an attorney for the state or a law professor because she thought I was working too hard.

@Promnight: Sorry to hear that, bro.

Our Megan is moving on up.

Too late for me to care, but I’m happy to see they came to their unnested senses.

@redmanlaw: Well, the city has enough going on to be attractive to more than gossip rags. How thick is the art scene outside of the historical galleries?

@FlyingChainSaw: Multiple art scenes exist here, like Venn diagrams – Hispanic, Indian, international folk art, big establishment galleries, avant garde, or grafitti. Indian guys can come from nowhere, or local Hispanic women can follow a vision and blow up and become The Next Big Thing. We make it to museum shows once in a while and the opera, while Mrs RML attends the big art markets for her job and because she loves the artists and their stories.

ADD: Mrs RML avoided the axe, but is even more convinced that she works for idiots and assholes. Sucks that her chosen profession has turned into a soul crushing exercise in corporate survival. My job now is to support her and listen this weekend, which means I probably won’t be going home to help my dad build a shelter for the hay bales for the horses.

@redmanlaw: Well, congrats to her on surviving, though I echo Manchu that sometimes it sucks more to be the one left behind after the blood-letting. Could she build up some feature writing (i.e. the monthly travel mags) or see if the NYT needs a Southwest correspondent who’s closer than Denver or Dallas?

@redmanlaw: How bout Gawker/Jez? They apparently have an opening now…

Srsly, glad to hear she gets to stay in her field.

@ManchuCandidate: I’ve said this for a long time about work: in many cases, the worst thing they can do is keep you.
Ain’t that the truth.