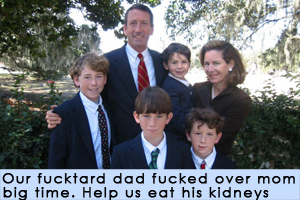 Poontang-crazed family-values GOP icon and South Carolina Governor Mark Sanford has been on a pestorking rampage for who knows how long, trashing his wife and kids like the wanton, diabolical Republican reptile he is, no doubt regaling his harem with stories about his wife’s sexual incompetence and praising their expert service in satisfying his most savage, monstrous GOP lusts.

The only reason that Sanford even did his confessional freakout is because The State newspaper editor called his bestest buddy and former chief of staff Tom Davis and told him, hey, we got the dope on the Argentinean poon tango and the phones are ringing off the hook here with tales of a lawless, relentless pestork-o-rama from women from all over – three and counting.

Meanwhile, women all over South Carolina are leaping from the weeds to deny that they were pestorking the priapismic governor or that they had had ever pestorked him. Among them were a former staffer and a lithe, taut dance professor from the local university

The former staffer, Clare Morris, now working in PR, told the FITNews blog that, “To tell you the truth, I don’t even like him that much” which is all but a blunt admission that she had been hate-fucking the globe-trotting family values satyr. Hate fucking? Can it get kinkier?

When asked if he had met Maria, Culbertson paused, then looked up, an embarrassed smile creasing his face.

Right, because if he did, he’d have to get into the details of resolving a sweaty, adulterous three-way with christian doctrine and that might even make his own head asplode <TM rptrcub>.

The insane, womanizing fascist twit revealed where his mistress, Culbertson and he enjoyed savage, wanton GOP group sex in a revealing, if demented interview with the AP today:

Sanford also admitted he saw Chapur more times than previously disclosed, including what was to be a farewell meeting in New York chaperoned by a spiritual adviser soon after his wife found out about the affair.

What’s the over/under on mistresses before Jenny takes a Skilsaw to Sanford’s seedsack?

BTW, I still stand by my score of 6 diapers.

Proud to say I have a Skil saw in the garage.

Now SC’s Lt. Guv, Andre Bauer, has taken the trouser snake outta his mouth just long enough to deny he’s gay and stated profusely for no apparent reason at all that he’s not gonna run for the guv’s office.

SC is redder than a baboon’s ass, so the pressure-cooker seckshal tension in that state must be about to blow the dials off the instruments.

Just when you think we’ve gotten all the mileage we can out of this one, Marky gifts us again.
Gov. Sanford told AP “Chapur is his soul mate but he’s trying to fall back in love with his wife.”
I’m no relationship genius, but I have to say reading a remark like that from my unfaithful husband would not put me in a forgiving mood.

@Mistress Cynica: “Chapur is his soul mate but he’s trying to fall back in love with his wife.”
– I’d get murdered twice if I ever used this line.

Like what RML said, Mr. OA would kill me then bring me back to life in a satanic ritual just so he could kill me again if I said that, and to the media for fuck’s sake.

and we all know what “blowing off steam” with male friends is code for.

I’m still waiting for the inevitable sex tapes before assigning a diaper rating.

@Mistress Cynica: It could be worse. It could have been reported, “Chapur is his soul mate but he’s trying to fall back in love with his wife by asking her to wear a Maria Belen Chapur mask around the house.”

Oh to be a fly on the wall in that marital boudoir, the “discussions” they must be having.

And with those luscious SC accents, I’ll bet “Mark” has three syllables.

FSM help me, it’s a Tennessee Williams’ play that’s leapt off the pages.

@Original Andrew: I hope it involves the throwing of lamps. And possibly broken glass bottles.

I loved it when Colbert congratulated him on being so boring. Told him he was as boring as ‘a manila enveloped stuck to a beige wall.’ I had to rewind several times so I could enjoy it over and over.

Scah-lett! Ah noe ya drink, and Ah noe how much ya drink. Ah noe ya like yah bran-dee.

And BTW. Still no news on the Johny Earle sex tape? As to availability and such as? Or waiting lists?

@Original Andrew: Is it wrong for a native southerner to start to puke at the sound of a drippy, syrupy sweet tea accent, esp from the lowcountry?

Being from Arkansas, I can appreciate the wide variety of Southern accents, and honestly, I just adore the Georgia-SC ones. There’s truly nothing hawtter to me than a handsome gentleman with an elegant Southern drawl, yessirree.

My own Southern twang pops up at the most unexpected times, like when I’m ordering Chinese food: IE.”I’ll have the low-mayne.”

@rptrcub:
If Hustler can make one about the Spitzer affair, well, they’re already writing the “script” for this one

@Original Andrew: As opposed to “chaperoned by my spiritual adviser” in Noo Yawk Citeee? If my memory serves from last week’s liveblogging of the presser, his spiritual adviser is named Cubby.

@Sally Kerns: I can only imagine the screenplays you’ll be able to write with a Johnny Milllll sex tape to inspire you. I still get a flush thinking of some of your stories from the primary.

Try saying “antenna,” which is another one that cracks people up.

When I say it, it sounds like “ant tannah.”

@Original Andrew: My issue with “antenna” (as well as with “insurance” and “library”) is that the Texan incorrect syllable emphasis comes out of my mouth:

@SanFranLefty: Actually, NASA ops is based in Texas – so it is the authoritative pronunciation.

@SanFranLefty: There’s more than one way to say NASA?

My twang also appears on library. Also oil and time. and some others I can’t think of right now but those two are the ones that always give it away.

God I love that phrase.

@Jamie Sommers: Oh, yes, how could I forget the word oil? I try to avoid saying it around non-Texans as I get so mocked. Here’s a test for you: try saying the word “lawyer” out loud….at least the way I and everyone I know in Texas say it, involves the awy sound stretching out for about three syllables. Therefore I use the word “attorney” whenever possible.

@FlyingChainSaw: That’s what I’ve told Mr. SFL but he still mocks me for how I say it. At least in Texas it’s pronounced “Naaah-saw” but apparently the Northern Californians who work at Ames Research Lab say “Nas-uh”

That is so cute.

Mr. OA’s sexy Southern accent is quite subdued when we’re home in Seattle, but when he returns from spending a week visiting his family in Little Rock–good lawd–he opens his mouth and the Dixie Stampede falls out.

@SanFranLefty: You might point out Armstrong announced, “Houston, Tranquility Base here. The Eagle has landed” not “Berkeley, we’re here. Save a burrito for me, for when we get back, will ya?”

@SanFranLefty: I’ll put the over and under, so to speak, on his adulterous babe count at 10.