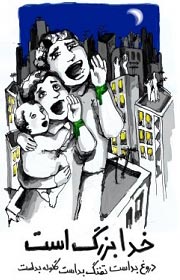 So we’re telling the neighbor Thursday night that the only official without popular legitimacy in Iran is Ahmadinejad: He did not win the election, he has no right to continue as president. Everyone else, including Supreme Puppetmaster Khamenei, still has legal authority to sit in their comfy chairs.

Which suggested a solution: Throw Ahmadinejad under the bus. Expose an anti-revolutionary cabal at the Interior ministry that rigged the election, fire the scoundrels, discover the “real” vote count that shows Mousavi the winner, everyone goes home happy. You still have the Guardian Council to veto everything Mousavi or the parliament does, after all. And that “divine blessing”? Dropped cell connection with God. He called back to clarify.

All nice and tidy. And then Khamenei spoiled everything at Friday prayers.

The moment this is posted Saturday morning, we’ll be asleep on the West Coast, and Iran will be a half-hour away from what could be a very dangerous showdown. Khamenei started with magnaminous words celebrating the Iranian election process — but then quickly shifted gears, saying that process ended at the ballot box. Complying with post-election protests for a candidate would be tantamount to tyranny, and any blood will be on the protest leaders’ hands.

Our favorite part: It’s impossible to fake the election results, because rigging an election is against the law. Besides, any miscounting couldn’t possibly account for a 10-million vote difference between the candidates.

It was a Big Lie, and it was a whopper.

That Khamenei has the firepower to suppress the protests, through the Revolutionary Guard and the Basij, nobody doubts. But the moment those orders are given — and carried out — civil war begins. And if Iran descends into chaos, there are plenty of interested folks around its borders who would love to take advantage of the situation.

We’ve been hoping Khamenei is shrewd enough to understand that — that in fact he’s been keeping his powder dry in fear of just such consequences. But his threat Friday was clear, and he just may be stupid enough to act on it.

Image: “God is great. Lies are evil. Guns are evil. Bullets are evil.” [Golrokh, via niacINsight]

I suspect that he’s freaking out that the people (those ingrates!) are defying him and he wants to make them pay.

Earliest suggestions from CNN: lines of riot cops, tear gas. Could have been one shot, could have been a hundred. Could be thousands of protesters, or hundreds. Media blackouts suck.

(Incidentally, the Chicago 1968 cops are having a reunion on Friday. Ah, there’s nothing better in the world of comedy as perfect timing.)

Newsish: Explosion at shrine in south Tehran. Presumably false flag — in that the news came from state teevee.

Mousavi apparently announced a public statement which is now hours overdue. Could he be under house arrest and being coerced into making a “stand down people” statement?

10:04 AM ET — Shrine bombing attributed to suicide bomber. “More on that explosion at the shrine: ‘A suicide bomber was killed at the northern wing of Imam Khomeini’s shrine. Two people were injured,’ Fars news agency said, according to Reuters. Khamenei talked about the threat of terrorism in his speech yesterday. ‘Street demonstrations are a target for terrorist plots. Who would be responsible if something happened?’ he said.”

10:19 AM ET — Timing of reported blast. Many are reporting a message on Twitter claiming that the alleged suicide bombing at a shrine in southern Tehran was reported by state media before it actually occurred. There is no confirmed evidence of this. I’ll update if I see any.

@nojo: “It’s impossible to fake the election results, because rigging an election is against the law.”

Except when the Supreme Court decides that it’s okay in a one-off case.

Cries of “Death to the Supreme Leader” during scenes of rock throwing against riot police? That will not end well….

TJ/ Junior’s lil league championship game, threatened by rain, may in fact be on in 90 minutes. Go Dragons!

Here’s my question: What is the likelihood the military will support the students? This isn’t a coup, but it seems coup-like to me. Whoever has the military on their side usually wins.

@JNOV takes a little english to doctor the spin:

I agree it is coup-like. There is a pretty serious rift in the power structure underneath.

@JNOV takes a little english to doctor the spin: This was being called a coup a week ago, and nothing so far suggests otherwise.

Khamenei, the Supreme Leader, controls the Revolutionary Guard — although in a situation like this, you have to wonder whether the real control works the other way. The Revolutionary Guard is separate from the “regular” military, and there were reports this week that some Army generals were relieved or arrested when they refused to confirm they would follow orders if given.

Another very important detail: This is not just “students,” as classically understood in these situations. The breadth and size of the resistance is much greater, which makes this an extraordinary situation. If the crowds you’re seeing seem young, that’s because roughly two-thirds of the population is under 30. Whatever happens this moment, you have a very radicalized population moving forward.

And now to your question: As RZ notes, there is not a united front at the top of the regime. I don’t necessarily see the Revolutionary Guard switching allegiance — but despite the show of force today, I don’t necessarily see the Guard hanging completely together, either. This could split into armed factions — which is why I’m saying “civil war” is much more likely than “revolution.”