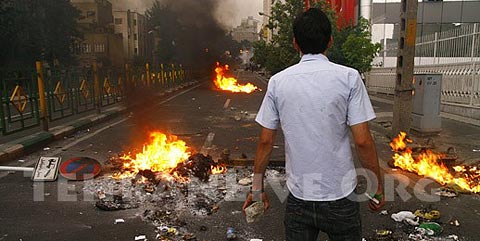 Iranians
65 million, roughly two-thirds under 30 years old — too young for the Revolution, too young to even remember the Iran-Iraq war. And while we tend to view Iran as a Shia nation in a region of Sunnis, locally they view themselves as Persians (51 percent), Azeris (24 percent, including Mousavi), and a half-dozen other ethnic groups, including Kurds (7 percent). But the nation can also be sliced into urban/rural groups, rich/poor, and other politically familiar divisions. All politics is local — until you rattle nukes at them.

Telecommunication Company of Iran
State-owned, controls Iranian communications. Cut off mobile texting Friday and blocked Facebook access — two prominent sources of information and organization for Mousavi’s campaign. When supporters switched to Twitter on Saturday, that was blocked too, as was Skype, YouTube and Flickr. Internet speeds in general are being severely throttled, making it difficult to check email, much less post photos or video. Satellite TV reception is also being jammed.

Mahmoud Ahmadinejad
Antisemitic pipsqueak. Despite his neocon-baiting rhetoric, holds no foreign-policy or military power. On the other hand, he’s quite capable of throwing the domestic economy into the shitter.

Mir Hossein Mousavi
One of four government-approved candidates for president. Prime Minister during Iran-Iraq war. Not previously known as a “reformer,” but his campaign attracted many supporters frustrated with conditions in Iran and its leadership. Apparently now under house arrest, although the government denies it.

Ayatollah Rafsanjani
Head of the Expediency Council (apparently now resigned) and Assembly of Experts — the latter of which would choose Ayatollah Khamenei’s successor as Supreme Leader, and may have the authority to remove him now. A key player over the next few days.

Guardian Council
The practical power in Iran. Twelve members, six appointed by the Supreme Leader and six nominated by the judiciary and approved by parliament. Holds veto power over parliament. Can bar any candidate for parliament, the presidency, or the Assembly of Experts. Formal authority includes certifying elections.

Revolutionary Guard
The Enforcers. Warned last week against a “velvet revolution” among Mousavi’s supporters. May control up to a third of Iran’s economy. Oversees the Basij, a volunteer paramilitary group that’s been active in suppressing street protests. May have brought in Ansar Hezbollah, a vigilante group loyal to Khamenei, for targeted jackbooting. Suspicions that the weekend’s events amount to a “military coup” are directed at them.

Ministry of Interior
Counted the votes. Or didn’t, depending on whom you talk to.

If there is a recount, will it be fixed too? Bush v. Gore has gone viral.

@Dodgerblue:
So who is the Iranian equivalent of Katherine “Pink Sugar” Harris?

Judging by what I’ve read yesterday, it seems the “Bomb Iran” crowd aka “Failed Iraq has WMD” crowd was less than subtly pushing for Mamhoud A.

Seems semi-relaxed tensions (I’m not deluded to believe that Iran would suddenly turn into a pro-West secular democracy) with the US America and/or Israel would end their “Risk”esque dreams of war (Triple Sixes!)

You mean Iranians are people?

BBC says this isn’t just happening in wealthy Tehran – there are demonstrations even in smaller cities, which is Crazy A’s base.

The horror: another fried Ferrari.

Inquiry: is the Iranian election more FUBAR than the N.Y. Senate?

(Actually, I’m not serious. Still, I thought Albany could not possibly get more dysfunctional. I was wrong.)

Latest news: an honest-to-God deadlock, as opposed to a metaphorical one.

I don’t know what the excitement was about Mousavi. He was an *approved* candidate meaning he won’t deliver the mullahs heads on sticks, which is what Iran needs right now, total literal and practical decapitation of the theocracy.

@chicago bureau: We are not lighting things on fire yet – that’s the difference.
@FlyingChainSaw: Iranian callers to WNYC this morning said essentially the same thing. The mullahs can’t even let the people’s choice of an “approved” candidate go forward.

Fun fact: The Daily Show actually had a correspondent in Tehran for the election. Which is more than MSNBC and Fox News could say. (Monday’s edition is going to be interesting.)

@Dodgerblue: They need a complete do-over with Jimmy Carter and Friends observing.

@chicago bureau: Plus it’s Jason Jones who is very likely to turn up shirtless in a meeting of the Guardian Council.

I’m having lunch with an Iranian friend next weekend; we agreed to wait until then before he unloads about the elections.

@FlyingChainSaw:
Not hardline and krazee enough for them.

@ManchuCandidate: I’m not sure that the expression “ten gallon tits” works in Farsi.

I honestly thought the Ayatollah Khamenei was dead. Seriously, is that the official name of the Supreme leader, or is the Ayatollah’s name Khamenei? If it’s the same guy, isn’t he like 300 years old?

@RomeGirl: Khamenei is 69, Mousavi is 67, Rafsanjani is 75 — all members of the revolutionary generation.

My man, Warren Olney, had a good show (as usual) on the protests today. http://www.kcrw.com/news/programs/tp/tp090615president_obama_amer (Under Reporter’s Notebook – about halfway down the page)
Apparently, the mullahs do not hold the bulk of the power… the Revolutionary Guard does. Their members personally control 30% of the economy. As always, follow the money.

@cassandra_said: That’s what led to suspicions over the weekend that this is actually a military coup. Which may yet be the case. But so far, everyone’s keeping up appearances.