Stinque
Home Latest Comments Log in
If it smells, we’re on it.
Stinque
This is America.
Today In Suck 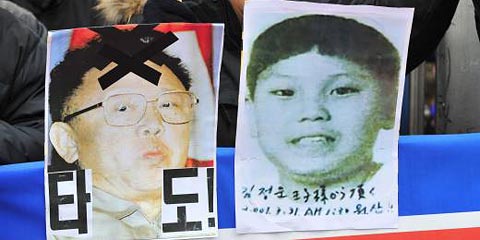 SEOUL, South Korea – The youngest son of North Korea’s authoritarian leader has been given the title of “Brilliant Comrade,” a newspaper reported Friday, a sign the communist regime is preparing to name him as successor to the ailing Kim Jong Il.

U.S. and South Korean intelligence authorities disclosed during a meeting this week that 26-year-old Kim Jong Un is now being referred to in the secretive regime as “Yongmyong-han Dongji,” which translates roughly as “Brilliant Comrade,” South Korea’s mass-circulation JoongAng Ilbo newspaper reported.

Speaking of DTV and commies, Bob Barr calls it a communist plot to corrupt our precious bodily fluids. Or something like that.

And let’s add what seems to be the only known photo of L’il Kim.

Un will be so ronery once Il dies.

By the time that picture was taken, he had already authored fourteen ground-breaking scientific discoveries, killed a tiger with his bare hands, single-handedly repelled an invasion fleet of South Korean running dog mercenaries, and won twenty six national poetry contests (of the twenty six he entered).

Are you getting that from the official North Korean website? I love that site!

Mandrake, have you ever seen a Commie drink a glass of water?

Serolf Divad: And dude can mash on the links, too. Carded a twelve on the back nine of Pyongyang Muni last week. Emblematic of the great spirit of the proud Korean people, really, so we shouldn’t have expected any less.

And would somebody please tell me why this idiot still has a job?

@chicago bureau: @Serolf Divad: I really hope that someone he went to school with in Switzerland will write an article/do an interview about Life With Kim.

What no Chosin Un wisecracks?

@Comrade Barr [emphasis mine]: In the same way that the government now dictates such heretofore private matters as [what kind of toilet to have in your home] and what kind of light bulbs you can use, Uncle Sam has now told you what kind of TV you can have.

Sounds like a plan! Also, all new construction of single-fambly homes and condominium/townhouse/apartment buildings of >3 domiciles must provide at least one bidet per dwelling unit!

@Pedonator: What! No more handstands in the shower?