Stinque
Home Latest Comments Log in
If it smells, we’re on it.
Stinque
This is America.
DOTD 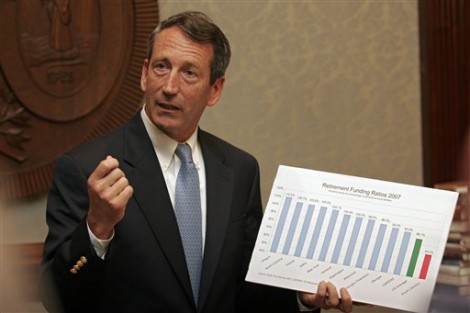 Gov. Mark Sanford is taking the General Assembly to court after lawmakers required him to accept $350 million in disputed federal money by overriding his budget vetoes.

Sanford quickly announced the federal suit after the Senate voted 34-11 on a state budget that forces him to accept the money.

“We know a suit will be filed against us on this issue, and as such we’ve filed a suit tonight in response,” Sanford said in a prepared statement. “We believe the Legislature’s end-around move won’t pass constitutional muster.”

You can’t respond to something that hasn’t happened, you schween bag.

And is it me, or does he look like a slower, dumber Boehner?

And this is for SFL, courtesy of my pal Agi. 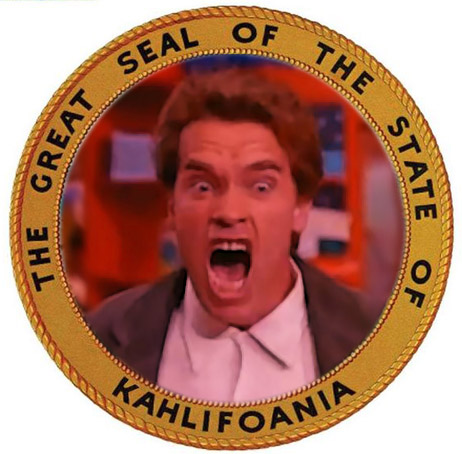 And thanks for the photo. During the Gray Davis recall and the stories of Arnie’s love for feeling up the lady-bits of ladies, a former employee of mine once made me a “No Grope Zone” button with Arnie’s face on it. I still have it.

The Louisiana House voted to override Bobby’s rejection of some of the stimulus money the other day, but the idiots didn’t know what they were voting on.

As members pushed their buttons and the voting board lit up, [Speaker] Tucker turned to one of the House aids [sic] and asked, “What does the amendment do?” The aid appeared to shrug her shoulders. Next the Speaker looked down and saw the vote, 99-0 in favor, and announced that the bill had passed.

A few minutes later the House adjourned for the day, with most members oblivious to what had just happened.

I highly doubt it will pass the Senate now, and certainly Bobby won’t sign it.

@finette: Bobby is a douchebag. And an exorcist. What a tool.

@blogenfreude: Heartily agreed. He and the legislature are also working on gutting the universities because they passed tax cuts last year when the state was getting a lot of extra oil revenue. Now, whoops! We’re about $1.2 billion short, and the state constitution is such a mess that education and health care are about the only things they can cut.

tj/ Just got appointed to serve as defense counsel to a lyin’, woman hitting scumbag. Dude is rotting in some tribal jail somewhere right now pending trial. Too bad.

@redmanlaw: Did you make the mistake of being in the courtroom when the guy showed up for an arraignment w/o an attorney.

@SanFranLefty: They pulled my name out of a hat when the Navajo Public Defender’s Office withdrew. Got the fax this morning. Pretrial in three weeks, no trial date set. Dude’s a flight risk . Guys like this just don’t get it and is almost certainly has the “blame others” mindset. I’m going to chew on this one a while, request reports and talk to the client and the district prosecutor with whom I have a good rapport.

@redmanlaw: Buddy of mine during grad school days was in the PD office in El Paso, and his wife handled DV cases. Needless to say, there were some awkward discussions over drinks at home.

@redmanlaw: Hey, check this little debate at the law firm that defended the Washington Redskins in the fight over the offensive image and name. Methinks a first year associate will soon be out of a job for hitting “Reply All”

@SanFranLefty: There’s a later post that says he was fired but because he flunked the bar for the second time.

@SanFranLefty: Saw it on indianz.com yesterday.

Yeesh, RML, I admire you for being committed enough to the idea of justice to be able to defend a scumbag. I don’t think I could do that to the best of my ability if I were you. How do you deal with the cognitive dissonance of trying to defend the guy they way you should vs. knowing what a wife-beating little coward he is?

@SanFranLefty: Even if his heart is in the right place, what an idiot. I loved the pissed-off partner’s “Note the lack of any parentheses in this email. It makes it much easier to read.” which 1st yr responded to with another e-mail chock full of parentheticals. Moron should have been fired for complete inability to write comprehensible English prose. No wonder he flunked the bar twice.