Would the CIA mislead? Never! 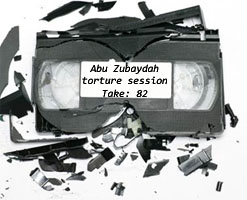 Nancy Pelosi’s accusation that the CIA misled her in 2002 when she was briefed on the possible use of harsh interrogation techniques in connection with the war in Afghanistan has raised eyebrows among right-wing commentators and politicians:

The top Republican on the Senate Intelligence Committee is calling House Speaker Nancy Pelosi’s accusation that the CIA misled her and others about waterboarding a massive attack on the nation’s intelligence community.

Sen. Kit Bond of Missouri on Friday contradicted Pelosi’s claim and called her criticism a tragedy. Bond said in a “Today” show interview that he reviewed the CIA’s material and it was clear that she had been informed about the enhanced interrogation method.

However, Bond said he was not with Pelosi when the spy agency briefed her.

Now, I can’t know for sure what Pelosi was or was not told in 2002, however, the notion that it’s inconceivable that the CIA might dissemble when it comes the Bush Administration’s torture policies is quite laughable. Have we already forgotten the lengths to which the CIA went to destroy evidence of their misdeeds?

According to a letter filed by the government in court today, the CIA acknowledged it destroyed 92 tapes of interrogations. The admission comes in an American Civil Liberties Union lawsuit seeking records of the treatment of prisoners in U.S. custody abroad. In December 2007, the ACLU filed a motion to hold the CIA in contempt for its destruction of videotapes recording the harsh interrogation of prisoners in violation of a court order requiring the agency to produce or identify all the requested records. That motion is still pending.

The following can be attributed to Amrit Singh, staff attorney with the ACLU:

“This letter provides further evidence for holding the CIA in contempt of court. The large number of videotapes destroyed confirms that the agency engaged in a systemic attempt to hide evidence of its illegal interrogations and to evade the court’s order. Our contempt motion has been pending in court for over a year now – it is time to hold the CIA accountable for its flagrant disregard for the rule of law.”

All in all, though, this rush to Demonize Nancy Pelosi is rather disturbing. The press and right-wing is having a field day with the story of what Pelosi knew and when she might have known it. And yet, at most Pelosi is guilty of knowing that torture was taking place in CIA detention facilities and not speaking out against it. Meanwhile the perpetrators of that torture, and the high ranking officials who authorized and ordered it have not been investigated or prosecuted for their crimes. Does it not make sense that one would go after the central figures before focusing on the periphery?

Republicans are enjoying a brief moment in the sun, sitting back an watching the Speaker of the House roast for a few days. I suspect they’ve made tactical mistake in pushing this story, though. Attacking Pelosi for whatever role she may have played in the torture scandal merely shines more light on it. That alone makes it far more likely that the American people will demand clarity and the sort of accountability that could find more than a few top Bush administrations in hot water (I’m talking about you Dick Cheney).

Serolf Divad is talking about you, Dick Cheney.

Serolf Divad
10:10 am • Friday • May 15, 2009
comment »
Choose Your Delusion
The Ballad of John and Satan Coming to a Theater Near You
20 Comments
Nabisco

It’s classic Rovean politics to demonize the accusers, but I’m willing to lay even money that even if Barry doesn’t have the stones to go after the torturers (sorry, “terrer fighters” as Bond, Kit Bond sez), Pelosi does and should not be trifled with.

Pelosi can’t reveal what they tell her in intelligence briefings – it’s verboten. And Kit Bond it one of the bigger schween bags in the Senate. Sure, he’s not Inhofe stupid, he’s not Cornyn stupid, but he’s pretty fuckign stupid.

@blogenfreude: Well, duh. Wouldn’t she receive briefings only if she agreed never to speak publicly about what she was told? Isn’t that why they call it secret?

@Nabisco: She didn’t have the ovaries to take on Shrub and Cheney when they were in charge. OTOH, she did learn politics at the knee of Italian immigrants in Baltimore, so she’s a scrappy one.

On a much-needed lighter note, our Rome Girl is back in Rome and taking some beautiful photographs.

@blogenfreude: I’m no lawyer, but isn’t there the little matter of the speech or debate clause?

TJ/ .In other news, our guy continues the march to the right…

I miss Rome Girl, you never see her around anymore…

I am here. Here being Rome. I just had a friend here for 2 weeks and we went to Sicily, the Egadi islands, Orvieto, Perugia and Frascati, the last of which he called “Pussy Pork Mountain” due to its abundance of pretty young things and a piazza filled with nothing but fresh roasted pork for sale to eat at cantinas that are not allowed to sell food, but will serve you their homemade wine.

563 pictures and many more posts on my own blog to come – and I just finished reading a book about the Italian political system, and have been mulling over a Stinque-worthy post that will be sure to send you cackling.

I promise to be on more now that things have calmed down!!

@RomeGirl: Hey there gorgeous! I hadn’t been on your blog for a while and was catching up with your adventures with the gay mafia. Your photos of the wisteria were awesome. It’s in full bloom out here too.

@SanFranLefty: Thanks! Now the jasmine is out, replacing the wisteria and rivaling its gorgeous smell. I’m really excited to have a few hours to start uploading my pics from my recent travels, too!

I also liked how Senator SprayTan quickly stepped up: “It’s hard for me to imagine that anyone in our intelligence area would ever mislead a member of Congress.”

@Tommmcatt the Wet Sprocket: Meet the new boss, same as the old boss.
Evidently, I will get fooled again.

@Mistress Cynica: No, we saw this coming, and decided that Barry would still be (much) preferable to Swampsow or Psychogeezer. It’s still the right call, despite our various disappointments.

Yeah, BHO was by far the best choice from both the DEMONcrats and the rePUKElicans.

Let’s just hope he doesn’t go all LBJ, but that seems to be his brilliant! Afghanistan strategy.

My take is that he’s a fundamentally decent person (unlike everyone remotely involved in the Bush Death Cult), HOWEVER! he seems to be a Clintonian neoliberal imperialist, when someone far more revolutionary is desperately needed.