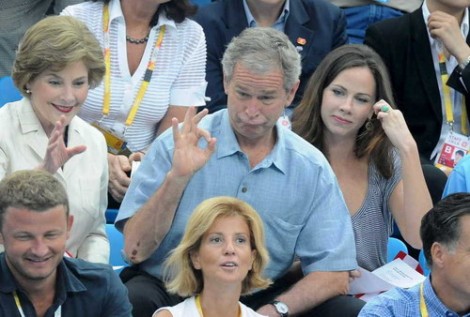 Bush joked that he’d need more such engagements to pay for the house his wife, Laura, bought without him seeing it. “I actually paid for a house last fall,” he told the crowd. “I think I’m the only American to have bought a house in the fall of 2008.”

We are well rid of him.

Douchebag of the day decade.

@Jamie Sommers wants her $1M bonus: P.S. Why haven’t you entered a bracket yet in the Stinque tournie?

Speaking of homes, here’s a photo gallery of a California tent city, contrasted with photos from the same location during the Great Depression.

@SanFranLefty & Benedick: Thought about that. Hope that’s the case. Figure it’s too early to say though.

@SanFranLefty: I tried yesterday but yahoo made me get my parents’ permission and a credit card # to log on even though I’m well over 18. Will try again now. Thanks for the reminder.

When do I win something?

oh, and hay, where is Prom?

That photo is faked. George doesn’t have his Snuggie — which as you know is a must for outdoor sporting events.

@chicago bureau: But he’s sporting drinking injuries on his right elbow, so it must be real.

@redmanlaw:
“I’m a paranoid schizoid product of the 20th century….”

Hey, since we’re paying for his insurance and pension, I hope the former was in a health savings account with Merrill Lynch and the latter was Privatized Social Security (Beta).

@Nabisco: Ding ding ding – we have a winner!

ADD: Play is under review in the booth

@ManchuCandidate: I want to be the first to congratulate you on what could be one of the funniest things I have ever read in the comments on Wonkette. As a public service, I am posting it here.
Ladies and gentleman— ManchuCandidate:

“Yes RedStaters, it’s all a fucking conspiracy. I’ve infiltrated these libtard ranks (see my screen name) and now I can tell you everything.

Larry Craig? He’s not really gay, seriously. He was set up by teh Pink Mafia as payback for the time he sang in the Senate Barbershop Quartet.

David Vitter? Another victim of the evil blogospiracy! He’s not a diaper hooker freak at all. The Masons and Illuminate drugged him and took photos of him wearing pampers.

Iraq? All those pictures of dead Iraqis? Actors. The whole fucking lot of them. Ever wondered where the cast of Frazier went? That’s why all the kids look like Eddie the Dog and the women look like tinted Roz and Daphne. They lied. Here is a photo from the real Iraq:

The economy? Holy shit! This ‘downturn’ was made to make Bush The Greatest look bad and elect a Muslin Terrorist.

And Palin. You guys were duped. Here is a photo of the real Sarah Palin.

@shortsshortsshorts:
Thanks. This is what happens when you spend too much time reading conspiracy websites and/or know folks who wear the tinfoil hats.

@shortsshortsshorts: Should have asked her about SALT, not the Bush Doctrine.

@SanFranLefty: The evidence of his latest oopsie-tumbled-over binge session was exactly what caught my eye first with this pic too!