This is Your Brain on Dregs 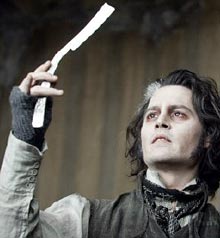 Well, just a couple. A church elder tells a blogger that the arsonist cut telephone and alarm lines before lighting the match. But police still have no suspects, nor are they speculating about the motive.

Which doesn’t prevent the blogger — Kevin “Coach” Collins of NYC — from stating the obvious conclusion: the fags did it.

See, the church had sponsored one of those “pray away the gay” events, which was like throwing sand in the face of the Homosexualist Agenders. “Would this be enough motive for some people? Of course it would,” says Coach, “but the old media will never mention that possibility.” Nor could it possibly be a local job, because in a small town everybody knows what your mother is dealing.

In fact, reason demands that poofy cannibal anarchists be called to task for their actions:

Ockham’s razor, which says: “All other things being equal, the simplest solution is the best” and it serves well in this case. It points to the fire being ordered by leftwing savages trying to strike a blow at Sarah Palin or Christian beliefs.

We know what you’re thinking, and stop it right now. Coach Collins holds a doctorate in public administration from an accredited university. If you cannot appreciate the majesty of Coach’s logic and grammar, then we’ll be forced to add you to our flesheater watchlist.

I totally read that as, “But police still have no suspects, nor are they speculating about the movie.” Which, given the way things go, probably isn’t that far off.

Does the now unemployed cast of ‘300’ have an alibi? No? Case closed.

Of course, it was teh gayz. The “Flamers” strike again!

They set fire to the following:
Reichstag (it sure wasn’t Hitler.)
Chicago (forget the cow.)
Rome (Nero wasn’t to blame.)
Apollo 1 (those astronaut suits were just awful.)
That pile of leaves next door

Looking at the tongue firmly planted in cheek list, it looks like “Coach” used Occam’s Self Loathing Gay Brother’s Razor instead.

The General thinks Nigerian child witches are to blame.

@ManchuCandidate: The Apollo I anniversary was just the other day. The suits were not the primary cause of the death of the crew so much as the CM design required a special tool to open the hatch from the outside and everybody ran from the tower when it filled with smoke. NASA has the investigation report up at its website.

Hang on. Does Putin have an alibi?

@redmanlaw:
I thought there were other factors like:
1) Suits were flammable
2) 100% O2 atmosphere
3) Exposed wire (!) bundles.

Aside from the hatch which was a pain in the ass to open.

Jehovah did it. He was embarrassed. It’s something of a miracle that the town is still standing.

@ManchuCandidate: Hatch design was such that overpressure inside forced it shut even tighter (the hatch opened inward, and was bigger than the opening (this is thought a very safe way to design a hatch if you are afraid of the hatch failing). The fire produced overpressure, making it impossible to open. They were all pulling on it when they died. The astronauts insisted, and overruled the engineers, that the hatch be changed so it opens outward after the fire.

We have far better things/people to be mad at than some backwoods church in Northwestern Arctic Dumbfuckistan. Personally, I’m still working on the Todd Palin Conversion Project.

It was the church’s “ex-gay” victims, pissed off about all the hot man-on-man action they’re missing now that they’ve been “straightened out”.

I love these tidbits from the Coach’s bio:

a member of American Mensa and the Sons of the American Revolution
Dr. Collins has recently completed Subrosa, a novel of political intrigue

Does the part about the “old” media creep anybody else out? Doesn’t it sound like they’re planning something, you know, for after the pogrom?

Also, Occam’s razor actually states: “Properties need not be multiplied endlessly”, or somesuch. It’s a math thing meant to keep you from calculating past the point of relevance (too lazy to google the exact terms or quote). I actually use it the same way he just did often, but he’s a fundie so he gets no breaks, ever, at any time.

Well yeah, but I want to give him about as much leeway with stuff as he would give me, so, exact quote and reference or NOTHING, damn him…

Pfffft. If Mensa members are so smart, then why to they pay lifetime annual dues?

Hendrick’s martinis tonight (after reloading). I’m springing for the good stuff after a tough goddamn week. I found out that eating a bunch of baby carrots will actually chase away the post-hearing fog and most of the headache.

@redmanlaw: I like the order of things (re-load, then martinis), although in other circumstances one wouldn’t recommend tough week -> reload -> martini. For postal workers, say. But I’ve heard that about baby carrots, especially from runners.

I had a pretty good job interview today which undid nearly three years of meh with the current gig. My Yoda Pez this weekend answers to the name of Hines Ward.

@nabisco: Skipped the reloading. Had a great martini by the fire with Mrs RML watching Keith O and DP then called it a night.

@redmanlaw: I caught DP on Keith last night. I’ve been listening to Dan’s radio show pretty faithfully the last few months, but hadn’t seen the man on teevee since possibly the original SC days. He’s still got an awesome voice, but there’s some nip/tuck going on there I think.

I’m happy that those guys are doing the pre-game show tomorrow. Usually I skip the televised pregame and listen to the local Pittsburgh feed, but I have a feeling that Keith, Dan and co. will be entertaining. Plus, Black Eagle should make an appearance. I’ll dial in the local feed about 4pm as per usual pre-game warmups.

@nabisco: I used to love it when KO would make his weekly appearance on DP’s ESPN show and talk about Sport. Dan would always kid Olberman about working hard to same Our Democracy.