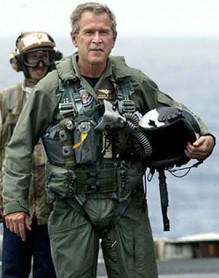 George W. Bush is still nominally the President for a few more days, and he is going to use his Presidential Powers to Mission Accomplish Barack Obama through a successful inauguration. The inauguration is happening, as it usually does, in Washington D.C..   Because Washington D.C. is full of poor black liberals and rich white gay liberals (just like New Orleans!), because it will be even fuller of poor and rich, black and white gay liberals during the inauguration, and because the inauguration means that George Bush will no longer be able to Accomplish Missions (except in regards to successfully filling his Presidential Library with 10000 copies of My Pet Goat), Bush is declaring a State of Emergency during the U.S. inauguration. Or it’s because he’s just helping out the city with some money. Either way, let the fun times begin!

According to the New York Times:

. . .it was a bureaucratic move intended to provide additional federal money to help the District of Columbia cope with the massive crowds that are expected to turn out for the swearing-in ceremony on Jan. 20 that will make Mr. Obama the nation’s first black president.

It looks like Bush is trying to ease the inauguration process for his democratic successor. Either:

1: He is as star-addled and concupiscent over the prospect of a Barack Obama presidency as the next person. The State of Emergency is in his pants.

2: He is so tired of being Presidency that he wants to ensure the inauguration goes off without a hitch so he can get the fuck back to Dallas.

3: Once the State of Emergency goes into effect, it will be easy for Bush to suspend the Constitution, declare himself President for Life, and send in the jackbooted thugs.

4. He is under the impression that the concentration of so many black and gay liberals in one place will summon the Wrath of God (just like New Orleans!); the jackbooted thugs will be there to protect Rick Warren.

I’m thinking it is a combination of 3 and 4, with an extra side of macho overcompensation! Let the good times roll, and by good times I mean tanks.

Has everyone seen the picture of Dick Cheney’s huge cock? http://www.gaymusicusa.com/apps/store/article.php?category_id=1&article_id=59

What you have to remember is that Dick Cheney is a midget, like 5 foot nothing. Thats just an average cock on a very small man.

Will one of you attorneys come bail the Stinquers out of the Ghey/Latte Liberal Concentration Camps when the tanks circle around us at 11 am and trap 3 million of us on the Mall before herding us into the waiting military aeroplanes to take us to Gitmo with our Mooslem leader Black Unicorn?

@SanFranLefty: Attack Force Stinque will be standing by, under the direction of Field Marshal RML.

@Mistress Cynica: You are right, at that point, we don’t need lawyers, we need guns and money. I will join the RML brigade.

About time we got some value out of those FEMA camps.

I’m practically mainlining anti-depressants and wine at this point because of a horrible tedious task I have at hand (applying for a refinance of my condo’s mortgage), but is this ass-wipe the dude at DOJ that Prommy sent us the article about? I know someone who quit because of this douche, it’s only now I’m connecting some dots.

@SanFranLefty: Gawd, I hope so. I’d hate to think there are more of them like that.

@nojo: I love the smell of formaldahyde in the morning.

@nojo: Srsly. Any film that uses the title as dialogue in such a contrived way should not be eligible. That is why ‘You Can Count On Me’ was so brilliant.

@SanFranLefty: There’s no manner of super-duper Mr. Clean that the Unicorn can use which will easily erase the stains of the apparachiks who were given the ability to do whatever they wanted.

People. Frost/Nixon is a play by Peter Morgan which was directed, with Mssrs. Langella and Sheen, by Michael Grandage; first at the Donmar in London (where the performances were created) and then on Broadway. Ron Howard had fuck all to do with it. His lighting-cameraman shot it; his editor edited it. Mr. Morgan wrote the script.

Now I’ve got that off my chest I feel that the world is a better place.

@SanFranLefty: Thats him, “thats my Hitler!” You may also remember him as the pathetic douchebag who called the Geek Squad to erase all his emails from his computer. Oh, and spending an entire day committing perjury before a Congressional Committee. Which this just-released report documents. Which the DOJ has declined to take action on. Which is a shame.

Did you catch the racist joke? “Black and Bitter,” thats how he likes his coffee.

@Prommie: Sounds like this shirt I saw in NOLA back in November.

@Prommie: And isn’t it great that they accessorized it with a pin-stiped fedora and loud, ugly boxers?

@flippin eck: I really hope you bought one.

@Mistress Cynica: Me too, I want one.

@Mistress Cynica: Wish I had. Just have the photo of it, unfortunately.

But I also wanted to share the t-shirt I just bought for a friend in a shop here in Chicago. I can check if they have more if you or anyone else wants one!

@flippin eck: Ah yes, SFL and mellbell, I was going to ask if you wanted one of these. I can bring them out to DC.

@homofascist: Tempting as it is, I’ll pass. Thanks for the offer.