The War on Christmas 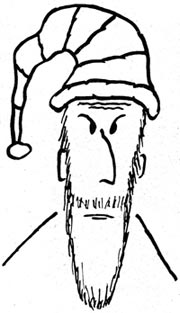 [It’s time once again for our Black Friday column, an annual tradition since it was first published in the Oregon Daily Emerald on December 3, 1979. Gather the kids!]

“This is Cy Vance, honey — get me the President!”

“This is your President. What’s going on?”

“A bearded maniac has taken over one of our embassies!”

“Again? Come on, Cy, it’s four in the morning on Christmas Eve…”

“I’m sorry, sir, but it couldn’t wait — Santa Claus has the North Pole embassy under siege!”

“Meet me in the Oval Office.”

The only reported casualties sustained by the hostages were bruised knees. Three elves are known squished.

“Ladies and gentlemen — the President of the United States.”

“Before I entertain questions from the press, I have a short statement:

“Late this morning, we received through a third party a list of the Santatollah’s demands. He says he will not release the hostages until we promise to give from the heart and not from the pocketbook; toward that end, he is demanding the extradition of Fred Meyer.”

“Mr. President, how could one of our embassies be taken over so easily?”

“I must admit we were caught off guard — not a creature was stirring inside.”

“How are the hostages being treated?”

“Intelligence sources tell me they are being bound and tickled.”

“Mr. President, is there any truth to the rumor some hostages will be released as a goodwill gesture?”

“We have heard the Santatollah plans on letting the 12 children go because they are victims of what he calls ‘crass American commercialism,’ but we cannot as yet confirm that rumor.”

“Does Santa Claus know that Fred Meyer is dead?”

“This is Babwa Walters at the gwave of deceased depawtment store magnate Fwed Meyer with one of my special ‘Celebwity Interviews.’ Mr. Meyer, Claus has said that your slogan ‘Chwistmas means more at your Fwed Meyer store’ is demeaning to the holiday. What are your opinions?”

“Good evening. This is Mike Wallace, live from the North Pole, where on tonight’s special edition of 60 Minutes I’ll have an exclusive interview with Santa Claus.

“World attention was focused here today when a band of elves calling themselves the Christmas Liberation Front seized the American embassy and are threatening to cut off America’s supplies of toys this Christmas if Fred Meyer is not sent here for trial.

“The Claus interview, recorded earlier today, was granted on the condition that all questions be approved in advance. The Santatollah spoke through an interpreter…”

“Santa, you’re a jolly old man — so why? Why do this to the children of America?”

“The Santatollah says he is doing it to the parents of America, who have fallen prey to the notion that bigger is better. He says once Fred Meyer is brought to trial and exposed, the parents will learn the errors of their ways — before the children are corrupted beyond help.”

“Santa, do you know that Fred Meyer is dead?”

“I am sorry. I cannot ask the Santatollah that question — it was not approved.”

“We interrupt Battle of the Network Terrorists to bring you this news bulletin.

“Santa Claus and his elves have released all the hostages after extensive negotiations with Presidential envoy Amy Carter. Under the terms of the agreement, the hostages will be returned to their families by Christmas morning, and the Administration will bury a lump of coal in Fred Meyer’s grave.

“Now this commerical from K-Mart…”

Not mentioned was Operation Reindeer Hoof which failed in large part because the Naval (?) mission planners at the Pentagon failed to take into consideration the possibility of snow at the north pole which fouled up the engines of the Sea Stallion Helos at the rendezvous point forcing the mission commander, kindly old soul and friend of all races Charlie Beckwith, to abort.

Rudolph has to be North Pole security, right? That built-in spy-light has to be good for something.

Who the hell is Fred Meyer?

@ManchuCandidate: Thank you. Now I know. (Bangs head on wall)