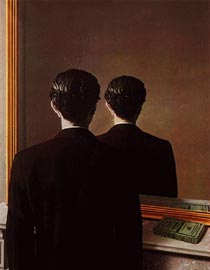 We only read Politico when we’re desperate for story ideas — i.e., when Google News doesn’t put out — so it was by chance that we stumbled across this astute analysis from Jeanne Cummings:

1. Obama’s gamble to stay out of the presidential financing system.

Well, sure, that’s easy to see now, the day Barry was blowing millions on network vanity programming. But what about then, Jeanne, back in September when the insight would have been valuable?

Obama has taken on a extraordinary [fundraising] burden that is complicated by his unprecedented ground game strategy for the fall and the late close to the primary season….

Meanwhile, McCain will have the luxury of spending most of his time with voters.

And, just to pile on: “McCain has had months to lay the groundwork for a fully coordinated effort between his Virginia operations and the RNC.”

Yes, of course — if the Republicans know how to do anything right, it’s run a presidential campaign. How’s that going?

Politico has been like this all year, making the same mistake as Hillary and the Republicans: treating the election like it’s 1992, Episode V. Their “who won the day?” column reads like a War Room outtake, all tactics, no strategy — as if we’re eternally doomed to the news cycle, when all it took was a candidate capable of transcending it. They’re the Web’s Wolf Blitzer, forever clueless but somehow the focus of attention.

They’re certainly good for the latest Diva Developments — we love Republican backstabbing as much as anyone. And journalism is journalism, whether in print and online. But this pretense that they’re experts? Save it for Chris Matthews.

Sounds just like the talk among the wingnuts when Palin showed up.

Problem is that if you ain’t (sic) all that smart and competent (two areas wingnuts aren’t good at) then you are really in no position to judge someone’s abilities.

These dumbshits aren’t good at strategery and taktikals as they thought they were. I’ve said it before about the Black Eagle/Unicorn is that he ran the political equivalent of a guerrilla campaign which negates conventional statergery and taktikals. He wasn’t concerned about the news cycle, he was all about winning hearts and minds.

The Repukes did not. They went with the tried and true counter insurgency fail of Vietnam, Afghanistan and Iraq which was “Grab’em by the balls and the heart/mind will follow.” Never works. Hillary figured it out but way way way too late.

I suspect that the Repukes will have a hard time replicating this success because of one important factor. RWers don’t have empathy. If you want to win the hearts and minds you have to show you give a shit about them aka empathy. Barry not only showed, but he’s proved that he has it (see trip to HI to visit Tutu.) Give a Repub empathy then you have a Demrat.

Kudos to Sun Tzu Unicorn and the rest of his team.

I don’t think we know yet how seriously awesome Obama’s campaign was run. I think years from now, they’re going to be studying it in schools.

@ManchuCandidate: What a splendid analysis! “the political equivalent of a guerrilla campaign” That’s just great. “Metaphors are good to think with,” and that one is really elucidating.

@ManchuCandidate: It is not possible for a person with an IQ of 90 to distinguish between a person with an IQ of 91 and a person with an IQ of 151. The entire scope of the difference lies above the perception level of the person with the IQ of 90 (of course I use IQ as a handy code and not because I believe that the scores on IQ test truly do provide a full assesment of “intelligence.”) This explains the phenomenon of the Hero Of The Stupid, the Hero need only be one little sliver smarter than his or her followers. Thus, Sarah Palin, hell, thus, Bill Kristol, Bill Safire, and George Will.

@lynnlightfoot:
Thanks. I read way too many books on guerrilla warfare and Sun Tzu.

A friend of mine, in the know, told me that it is really in large part to Barry’s training as a community organizer based on the works of Saul Alinsky. The funny part is that the principles/philosophies for peaceful means and violent means are the same, but obviously the execution is different.

@Prommie:
Your observation is well founded and I missed. Begs to ask why we ask “average” folks to decide in a democracy. Still better than a kingdom/dictatorship. Winnie was right. Democracy is the least worst system of governing.

In an “normal” year, Barry would not do so well because he’s not pandering to their animal needs. However, these aren’t normal times.

I’ve been thinking quite a bit about his success (what’s it all about, can it be replicated the next time around, etc.), and something I saw on the way in to work this morning offered a clue: a conservatively dressed guy wearing a “Historic Preservation for Obama” button. What this campaign has done is turn identity politics inside out by using the “unity” theme to advance the idea that everyone (not just blacks, women, gays, etc.) belongs to an affinity group whose interests will be given weight in an Obama administration. And part of why Obama is able to pull this off is his unique ability to be many things to many people. He’s black and white, successful and from humble beginnings, liberal and conservative, radical and cautious, emotional and intellectual, etc. This is also why he will be a huge disappointment to many people when he isn’t able to deliver on all those things. But for right now it’s what people want, and it has made this campaign probably the best-run in my lifetime, if not longer.

@mellbell: I’ll gladly take eventual disappointment with Obama than four more years of absolute crapulence. Clinton wasn’t able to get all the stuff he promised completed, but he seemed like Jeebus compared to Caligutard.

@rptrcub: Don’t get me wrong, I’m squarely in that camp, but I foresee rending of garments and tearing out of hair at the first major misstep.

@ManchuCandidate: That One is the fish that swims in the ocean of the people.

@mellbell: Perhaps “misstep” is the wrong word. How about trying on “concession” for size? Yep, that nails the general view of it.

@mellbell: Already happened — the post-primary compromises, which weaned me from Unicorn-speak. He’ll be a good president, maybe even a great one, but the country won’t stand for a progressive one.

@mellbell: We need to have a little sit down with those who might have OD’d on Hope (TM). A moderate amount won’t harm you, but like binge drinking, the results of overconsumption lead to delusion.

@nojo: The hope was for a win.

What were the post-primary compromises?

Quite frankly, my dear, my feeling is that the country sure would stand for progressive (right back to 1932) economic and regulatory policy, and it would stand for single-payer universal medical, too, and I think if anyone just has the balls to put it on the table, it could go, Hopey is being way weak with his proposal.

As for social policy, meh, he can compromise all he wants, I could give a shit.

@Prommie: FISA, for one, off-shore drilling for another.

@nojo: Great minds and all that. His support for faith-based programs doesn’t strike me as a compromise (and, I might add, it’s actually pretty kosher as far as I’m concerned, so long as appropriate restrictions are in place); that was the nature of his work as a community organizer. Shifting on gun control is unfortunate, to be sure, but not surprising. What’s this about AIPAC?

He’s just nuanced, as you said on hamster-blog.

Gun control is an issue we should throw on the trash heap. Screw it.

FISA allows the president to to what the president chooses to do, so, what harm, just because the law passed doesn’t mean Hopey has to order the agencies to do what it allows. Then it will expire.

Faith-based? Ed Rollin’s invention, the means used to buy black ministers for Christie Whitman? Well, ya know, as long as its buying people for the democrats and not the republicans, I am for it. No, really, I mean, Catholic Charities and Lutheran Charities have been doing great work for years, give them money, let them run programs.

AIPAC? What, you don’t like AIPAC? How else would Isreal defend itself, if it didn’t control our government?

@mellbell: “Jerusalem will remain the capital of Israel, and it must remain undivided.”

And perhaps I should say Capturing the Middle instead of Compromise. But whether you agree or not with any of the Unicorn Five, that string of moves came after he won the nomination.

@nojo: I remain willfully ignorant as concerns Israel and the Palestinians. There are fanatics on both sides, and the best we seem capable of is keeping the body count to a minimum. What is there really for us to do?

We’re actually capable of doing a lot, but AIPAC has DC by the balls.