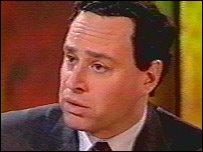 Blogger John Cole was a believer in Peak Wingnut, but I never have been.  One reason is that I know the scope and depth of the Wingnut supply. Also, as we have learned in recent weeks, there is a huge untapped source of Wingnut in Alaska. It’s also the case that, for every major wingnut, there are at least ten thousand minor-league wingers out there spouting nonsense.

Another factor is the ability of right-wingers to snap back into form after saying something that almost makes sense.  Consider David Frum, who I wrote about only yesterday.  Last night on MSNBC:

From his first answer, however, it was clear Frum had a very different agenda: to attack Rachel Maddow. Discussing the “ugliness of tone” in American politics, he said that Maddow’s show, “unfortunately, is itself an example of that problem.” He then compared her tone to the hateful outbursts of some McCain-Palin supporters:

Exchange after the jump.

MADDOW: Do you think that my tone on this show is equivalent to people calling Barack Obama somebody who pals around with terrorists, people yelling from the audience at McCain-Palin rallies, Bomb Obama. Kill him. Off with his head. Traitor. Are you accusing me of an equivalence in tone?

FRUM: I don’t think that’s an important question. I think the question is, given the small plate of responsibility that you personally have, how do you manage that responsibility? The fact that other people fail in other ways is not an excuse for you failing in your way.

FRUM: I worry about that.

As you probably know, Rachel Maddow has people with other viewpoints on her show all the time.  She also has very good (and rising) ratings.   Frum has turned into something worse than the joke he was before. He’s a dangerous, angry little wingnut, and his atrocious behavior shows he knows he’s cornered (pardon the pun).

given the small plate of responsibility that you personally have

Sometimes, against my better judgement, I’d like to see Rachel get stabby.

I watched the whole segment on C&L this morning. I love how he attacks Maddow’s discourse, and yet she is amazing with him. She doesn’t cut him off or yell, lets him finish his sentences and thoughts, WRITES THINGS DOWN as he is talking (let’s see Hannity or O’Reilly do that), and then gently scolds him when he tries to cut her off. She is the dictionary definition of unflappable. Unlike the video I watched yesterday of Tim Russert interviewing Bill O’Reilly and Paul Krugman, where B.O. gets to frothing psychopath level in about 5 seconds.

Frum is a head case. This guy has been bitching about Talibunny being unqualified to be a heartbeat away from the Presidency (which, of course, she is) after never questioning the Caligutard’s ass for eight years and writing his speeches.

What about competency and intellectual capacity there, lunkhead? The reason Frum is joining the chorus of conservatives who’ve suddenly discovered some competency threshold for Prez or VP is pure opportunism.

Sorry about the ridiculous tag on the end, I screwed it up somehow and can’t get it smaller. At least it works I guess.

I wonder if Frumlet imagined himself being interviewed by the ghost of his mother, Barbara Frum, because that was what I thought was happening when I watched the clip. Barbara was notorious for making people squirm and pursuing folks if they tried to evade.

I don’t know why US American media takes this guy seriously especially after he wrote that inanely stupid book, “THE END OF EVIL” with noted shithat gasbag, Dick Perle who showed that his idea of strategic thought came from playing Risk as a teenager.

@ManchuCandidate: If you’re dealt Australia at the beginning of the game, the odds are heavily in your favor to eventually rule the world.

Speaking of RWers, Christopher Buckley basically forced out of his dad’s National Review after endorsing Obama.

‘freude: your quote is suffering from a bit of repetition compulsion. Doctor, heal thyself!

@SanFranLefty: I love that Buckley says he was “fatwahed by the conservative movement”.

While I regret this development, I am not in mourning, for I no longer have any clear idea what, exactly, the modern conservative movement stands for. Eight years of “conservative” government has brought us a doubled national debt, ruinous expansion of entitlement programs, bridges to nowhere, poster boy Jack Abramoff and an ill-premised, ill-waged war conducted by politicians of breathtaking arrogance. As a sideshow, it brought us a truly obscene attempt at federal intervention in the Terry Schiavo case.

So, to paraphrase a real conservative, Ronald Reagan: I haven’t left the Republican Party. It left me.

@ManchuCandidate: She kicked his ass off the set, gave him the bum’s rush. What a vile sack of crap her guest was.

@homofascist: And I always thought Thank You for Smoking was the work of a true Cynic.

@Signal to Noise: You are right on target about “pure opportunism.” There’s a chill wind blowing through the corridors of power in the Beltway and in the MSM. Turning your coat is a ticklish business, very hard to get the timing right, and midway through the process you’re vulnerable to friendly fire from both sides.

@lynnlightfoot: Follow the money, follow the down-ticket candidates. Who’s running away from McCain today? Charlie Crist decided he had better things to do, and I think there’s a Save Our Senators movement afoot with the Repubs.

Conservative bloviators can change direction with the wind, but nothing’s at stake with them. Watch the folks whose power depends on their moves.

@nojo: ding, ding, ding! Wait and see if a massive RNC funding of vulnerable reps and senators comes down the pike in the next week.

@Pedonator: still one of my favorite books ever. Christopher Buckley has “must-read” status for me even for his mediocre books after that one.

@lynnlightfoot: I think it also has to do with Bible Spice not being “one of them.” They tolerated Dubya because they knew his blue-blood roots. The Talibunny is too close to the rural, down-home, Christianist base the GOP intelligentsia want nothing to do with.

@lynnlightfoot: …midway through the process you’re vulnerable to friendly fire from both sides. You turn an elegant phrase.

@nojo: I saw something elsewhere about Crist and wondered if the guy was about to switch parties, cancel his upcoming nuptials and pull a McGreevey. But he’s just kicking his Geezermania down a notch. You could knock my disappointment over with a feather anyway, his endorsement is worthless and as for my team, we don’t need players like him. Let him make some unfortunate GOPchick unhappy.

@Signal to Noise: I hadn’t seen “Bible Spice” before. I like it!

Is that what you kids call it these days? I always heard it as tug a McGreevey.

Christonacrutch! NBC is doing a puff piece on Palin and how special needs kids and their parents are turning out in droves to her rallies. But didn’t she cut AK’s Special Olympics budget? They didn’t mention that. Time for an email…

I thought ALL the people at her rallies were special needs people.

@Prommie: Beat me to it … well-played sir!

@Prommie: IQs below 80 without any physiological reason do not count as special needs in her goobernatorial administration.

@Mistress Cynica: He is indeed both projecting and in over his head.