Stinque
Home Latest Comments Log in
If it smells, we’re on it.
Stinque
Assholes, they do vex us.
Weekend Sedition 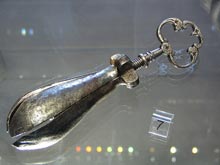 “I think there have been quite a few reporters recently,” said Mr. McCain’s closest adviser, Mark Salter, “who have sort of implied, or made more than implications, that somehow we’re responsible for the occasional nut who shows up and yells something about Barack Obama.”

If the occasional nut you’re talking about is Sarah Palin, then yes.

Concern in G.O.P. After Rough Week for McCain [NYT]

It keeps getting worse.

Someone took the time to look over who helped cause the economic flameout. Contrary to Con belief, it wasn’t tinted people or Freddie Mac and Fannie Mae but rather the banks themselves. It was rich well connected mostly white people, you know, the Republican base.

Just to remove doubts about Hockey Mom Palin getting booed in Philly.

Even more disgusting is that she tried to use her kids as a human shield. “Philly fans wouldn’t boo kids”

When the apocalypse comes, her kiddies will be eaten one by one to keep the queen alive.

@ManchuCandidate:
WOW that was some serious booing! those crazed philly “broad street bullies” flyer fans did good. lived up to their name.
i heart the flyers. my family had season tickets when i was a kid. right behind the goal post (meaning i’ve caught some pucks) those were the glory days, remember bernie parent? he was my fave.

@baked:
Sigh, yes I vaguely do. Till he nearly lost an eye, Parent was an amazing goalie (and former Leaf.)

They beat up (literally in some cases) the most or 2nd stupidest team in hockey, my loved/loathed Toronto Maple Leafs/Loafs, on a regular basis.

@JNOV:
that booing gave me one of those oh-so-rare-moments when i’m proud to be a native philadelphian.
the crowd could not have booed louder or longer if they rolled OBL out on the ice on a gurney.
and with the kid there! brotherly love, the kid kept the batteries off the ice.

@baked: Yes, Beautiful! Now we need to get Nabisco to see the light. He’s harboring a lot of animus toward the Phillies. Shame, shame shame.

@ManchuCandidate: I love how they try to drown out the boos with that shitty music.

@JNOV: Like I said,Flyers and Sixers are okay by me. The burgh didn’t even have hockey when I was a kid, and I’ve spent my time in the Rectum Spectrum.

But I cling to my Pirates and Stillers like guns and religion.

@JNOV:
hey! did you see your crackberry?

@nabisco: I suppose the thing that confused me is that they are different leagues or conferences. If we were to go head-to-head at the World Series or Superbowl, I’d have to choose, and that would be sad. But until then, I support my state. Ahem. And I was born in Pitt, so, you know, I can claim it as mine. And the Eagles are beyond terrible right now, so I’m happy to have the Steelers to love.

Anyone old enough to remember this Converse commercial?

Hey, Dr. J! Where’d you get those moves? Are you wearing magic shoes?

Alright already – I know we’re all on the edge about the geezer’s next move, so I’ll do a post to make you laugh. Give me a few minutes.

I thought for a moment monk had surfaced…

CONVERSE! my sneaker of choice. i have 4 pair. my faves being the short black, and the crown of my collection:
i have the official converse john lennon canvas hi-top special edition. the laces say ‘peace’ and molded into the rubber in front and on sides, . says,
‘imagine all the people living life in peace’.his self portrait is signed over the round logo on the side. lerve those kicks so much.
i wore them the days i was out trying to ease some suffering post ike.
the force on my feet.

@baked: in my rebellious pro-Sandinista youth, I wore one red Chuck, one black Chuck, always hightops. Now I have blue lows and black highs.

@baked: I’ve discovered I’m inadvertently hip because I have a taste for Converse lowtops. I just like ’em when Birks are inappropriate. Very comfy.

@nojo:
we’re on some weird telepahic wavelength. have you noticed?
tell me you don’t know who played samantha stevens uncle, character name and real name. so i can stop looking for the microchip.

are they hip now? huh. i’ve been wearing them my whole life.

nabeeeesko knows what a sneaker should be!
we are so hip, we don’t even know it.

@baked: Let’s see if I can do this without cheating…

Paul Lynde wasn’t the uncle, was he? I remember him being a relative, but not that one. Wasn’t the uncle some distinguished Brit?

Character names are long lost to my childhood. I think Dick Sargent sent me into lifelong shock.

@nabisco: I was a black-on-black devotee, myself. I still have all the old shoe boxes, since they’re the perfect dimensions for storing CDs.

I don’t own any sneakers – I never liked them because they gave me flashbacks of the horrors of gym class.

@Mistress Cynica: At my age, I had no idea, even if Hollywood Squares was my favorite game show. I just accepted eccentricity for what it was. A few years later, I’m not sure I even had a clue about Charles Nelson Reilly.

@nojo: I think the Brit you’re thinking of was Samantha’s father. Also there was Dr Bombay. DOn’t remember either actor’s name.

@nojo:
ok i can stop looking for the microchip. yes, it was paul lynde, btw.
just seems like you’ve been writing stuff 5 minutes after i’m thinking it. weirded me out….but we’ll always have our bobby kennedy moment…..

dick sargent. yeah, i’m kinda not over that either. can you imagine the meeting that took place over this. “we’ll just put in another actor! people are so dumb, they don’t care!” how prophetic.

@baked: Okay, let’s see if I can blow your mind again…

Year or two back, I discovered that Dark Shadows was on DVD. Spent a few weeks plowing through the months where Barnabas was introduced and developed, and when the show made the switch from black-and-white to color.

When I was a kid I perfected a hum/whistle version of the theme. If I wasn’t home from school by 4 p.m., I was very angry with myself.

In the summer by 3:30, that’s when the Three Stooges came on the local affiliate.

@nabisco: I must admit, I never appreciated the Stooges (Tres, not Iggy). I think that marks a deep cultural divide among comedy geeks.

@nojo: I have three brothers.

@nojo: There were times that I felt like Gummo, yes.

@nojo:
OK you’re doing it again.
stop that!
thank you.
no, thank YOU.

@nabisco: You and my mother. Poor woman — her husband and two sons would take turns doing a proto-MST3K at the TV every night.

I’m gonna give you such a zetz. The stooges taught me yiddish.

@nabisco: I think that’s about the time it came on TBS back in the 80s — before it got all upmarket and pretty and was still WGN/WOR-esque (I initially did WOR-ish but I realized the entendre therein).

@JNOV: Totally OT but thanks for the support in the face of the commiefaggot incident on my blawrg. It is appreciated. I understand this stuff happens in the blogosphere but when someone starts attacking me, personally, it’s uncalled for.

@rptrcub: I am totally 100% behind you, and I’m sorry someone came into your home and took a dump on your floor. I have no idea how I’ll react when it happens to me. I just hope I cry some and not throw the computer across the room.

FWIW, I love the Stooges. My kid used to call them STOOGE-etz. Very cute. He also loved The Honeymooners.

Dark Shadows gave me the creeps — never watched regularly, but loved the vampire guy. They showed it at night when I was a kid.

My thing to rush home to see was Spiderman. I looooved Spiderman, and in the first movie they have a street performer singing the theme song from the cartoon. Heaven!

@JNOV: There are ways you can set up a trap to get the bastard’s IP address, then use a bit of code to block the said individual.

@rptrcub: If I need to, I will most definitely come to you to figure out how.

Jeez Louise! I live across the street from a church that plays recorded synthesized bell music at 7 am, noon, 3 pm and 6 pm. Dongdadongdongdong. They change the music based on the time of day and season, but the person with the key to the belfry must’ve died or something, because they’re been playing military theme songs at 6 pm since Veteran’s Day. I just heard the Marine Corps song AGAIN! I’m going to go talk to them tomorrow.

@rptrcub: Do you have any suspects yet? If he’s an ex, he’s sure full of self-loathing.

@SanFranLefty: I’m still sorting that one out. I don’t think I’ve ever de-friended or un-friended or whatever anyone because of their politics — I just drop the subject with them, and I definitely don’t cut them out of my life or personally attack them. And thanks, btw.

@JNOV: Why all day? And what would baby Jesus think about the militarization of this church?

@rptrcub: Can you get the IP with Blogger? On the rare occasions I’ve had to deal with this kind of crap, I’ve had complete access to server logs, which help to construct a plausible story very quickly.

Short of that, yeah, some kind of registration system helps. I realized after a few days here there was no need for Akismet — the Evil Spam/Comment Blocker — since registration itself is a deterrent, and I’m not running “trackbacks” as comments, which is where you get a lot of nasty shit.

You can also pipe Disqus through your blog instead of using the default Blogger settings — although I don’t know whether Disqus provides better asshole-fighting technology. (Disqus ain’t as bad as our recent experience with it, but WordPress-based comments allow me to program to taste.)

@nojo: Thanks for stopping by, too, btw.

It’s admittedly harder to do a lot of IP blocking/stalking on Blogger than it is with WordPress (from what I understand), but I was able to install invisible StatCounter code in the rail (newspaper term!) on the right hand side. From there, you kinda have to use deductive reasoning to figure out which asshole is giving you grief. Blocking with Blogger requires the use of Toolator — which lets you block 3 addresses for free, but you have to pay more for more blocking. (I really don’t feel like moving to WordPress right now.)

There’s also some Javascript thingy you can use but it requires a certain type of server (and I think it’s gotta be on Apache) for it to work.

Thanks for the Disqus tip — I’ve also looked at Haloscan, which apparently has some asshole fighting technology, but it can often breakdown easily (as experienced by J0e.My.God.).