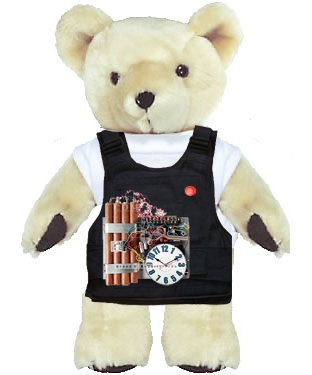 Sarah ‘Talibunny’ Palin’s dedication to establishing a militant theocracy may give the Psychogeezer a gumby, but her teasing dalliance  of fascism, rather than full-throated, grunting, gagging, shlong-gobbling surrender to fascism was only good enough to place her 2nd in Maxim magazine’s World’s Hottest Politicians competition this month.

In a sad testimony of our times and the inevitable decent of the western world into a theocratic nightmarescape, the clearest criterion separating first and second place in Maxim‘s World’s Hottest Politicians competition was literally an apparent willingness of the pol to ingest fascist man meat with sufficient abandon.

Who won? Mara Carfagna, Member of Chamber of Deputies, Minister for Equal Opportunity. European press reports indicate that Cargagna understood the first rule of fascist politics – suck off the thug who holds power – and got her head-start in Italian politics by gobbling fascist Prime Minister Silvio Berlusconi’s schlong with wanton abandon.

It is amazing that Pailin did not learn this lesson from her running mate, the Psychogeezer, who is a testimony to the primacy of enduring syncophantic humiliation to advance his place in US fascist politics. After he and his daughter were savagely abused by Caligutard’s 2000 campaign, the Psychogeezer spent the next 8 years peeling the caked smegma off of Caligutard’s genitals with his teeth and tongue for all the world to see.

Senate staffers remember him returning from meetings at the White House and playing his own pathetic game of look, sticking out his tongue and pointing the yellow stains smeared across it: “Loo’. Th’ plethilent li’thes me nmow.”

Talibunny’s gotten considerably less attractive to me every passing day. Not a big fan of her “the Flintstones is true” meme. US America’s answer to Stockwell Day (our Canada City Fundie Fucktard) but scarier because Day would not have access to anything more dangerous than a microphone not the Nukular Lanch Kodes.

No matter how attractive a female might be, if she’s ugly in her personality then that really kills any desire. 15 years ago, it would have hurt me to even type that, but that was before I had been burned by attractive on the outside ugly on the inside types.

nojo – your poll is all dicked up, and the results won’t load.

ADD: Oh, and someone should go turn off the lights in the old place.

@JNOV: Try it again. It’s annoying the hell out of me, haven’t had a moment to figure out why it’s not playing nice.

@ManchuCandidate: I was in a newspaper band we called “The Deadlines” (a) coz we were journalism geeks and (b) Dead cover tunes. After that broke up, I rounded up from hippie rockers from the student ghetto for a party. One of our songs was “What’s the ugliest part of your body? I think it’s your mind” done 50’s stroll style.

An ugly mind can negate any exterior beauty.

On a purely piggish level: Sarah Palin is NOT #2 out of those ten. Not even remotely close. Obviously, the time has come where I am no longer even remotely in step with “laddie” mags any more.

Considering the mindset of most of ’em, that’s a relief.

@nojo: Sorry, babe. Still AFU. Worry about it later. Just remember this saying from my Navy days: A bitching sailor is a happy sailor. I am very happy.

@JNOV: I got plenty more switches where that came from…

@Signal to Noise: You’re right, and Stephanie Herseth is the prettiest by far. Unfortunate hair, but very pretty face. Mara looks like she had that corpse gelatin shit injected in her lips, and her picture is the only one with a hottish pose. How hot can you look posing for your Congressional picture? Who remembers the mayor who posed semi-nude on a fire truck? I think I read it on Jez some time ago.

@nojo: I believe in God again.

Watcha all want for the party? We caan do it right, sushi, anyone? I would need a collection for that, but modest (like $10.00 per head), and I will provide the booze. Or I will do the world famous seafood ettoufe I make which has no resemblance to anything genuinely cajun but will make you very very happy, but just think of a sushi spread with those thai martinis?

@JNOV: Here ya <a href=”http://www.wusa9.com/news/columnist/blogs/uploaded_images/Or-Arlington-mayor-716613.jpggo” go.

Mayor on a fire truck in her undies.

@Promnight: Please, please don’t hate me, but I don’t eat fish. (I know. I know.) I’m weird like that. I don’t need food. I’ll have eaten before I make it to your place. I don’t even need booze. Youse guys’s company is alls I need.

I have always been scared of you,
With your Luftwaffe, your gobbledygoo.
And your neat moustache
And your Aryan eye, bright blue.
Panzer-man, panzer-man, O You–

No God but a swastika
So black no sky could squeak through.
Every woman adores a Fascist,
The boot in the face, the brute
Brute heart of a brute like you.

The last time I was reminded of this so forcefully? When Donald Rumsfeld was on People’s “Sexiest Men Alive” list in 2002.

@redmanlaw: Please tell me that meth lab business is true.

@JNOV: Arlington, Oregon? What the fucking fuck? Can’t I leave the state for ten years without all hell breaking loose?