We’re Not the Only One Out to Lunch 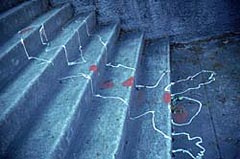 We’ve been highly distracted with geek chores the past couple of days, and we’re discovering that trying to catch up with the Financial End Times is like missing an episode of a primetime serial — we have no idea how that polar bear got there, but we imagine it’ll make sense eventually.

So pardon us while we attempt to wrap our exhausted mind around this:

Former House Speaker Newt Gingrich (R-Ga.) warned his former colleagues that they would pay a price in November for backing the bailout now — and that John McCain could ride to victory over Barack Obama by persuading voters that the bailout is really the “Obama-Bush plan.”

Now step back from this a moment and consider: It’s understandable that they want to run away from an unpopular president, and the Republican convention was the equivalent of outlaws trying to switch their black cowboy hats to white — but this is the first suggestion we’ve seen of throwing Dubya under the bus.

We’re tempted to agree with Newt, just to see the attack ads — a Rovian snake swallowing its tail.

Present. So, is there going to be a gathering place until CP is fixed, if it gets fixed? Kind of like where your class went during a fire drill. Is this the place, or is nojorising the place? Where’s the place?

Ha ha! The ads on the front page are in Spanish!

Awwwwwwyeeeaaaaahhhhhh! This is the original commenting system!

Or maybe the ads are in Portuguese? There’s some gorgeous Brazilian woman on the right of my screen. I want to be her.

Awesome, Nojo. But I have three words for you:

Get on that, willya?

@Tommmcatt Yet Again: Manchu? Any suggestions?

Just type it into the Google and turn the safe search off. I do it all the time. Trust me.

@JNOV: My guess about the ads — which highly amuse me — is that Google thinks “stinque” is Spanish or Portuguese. I’m sure we’ll be seeing our favorites soon enough.

@Tommmcatt Yet Again: Hey — how’s the recovery? Last I heard your back was better. You riding again?

Why are the recent comments shouting at me?

@Tommmcatt Yet Again: Haha is your google broken? Is safe search on? This hotness was like the fourth link. Edit! I comment too slowly and you just said the same thing.

@drinkyclown: I love my DrinkyClown.

Time to take my medz and settle down. Ta-ta!

@JNOV: Why are the recent comments shouting at me?

Clever Design Decisions may have Unintended Effects when implemented. I’ll tone down the caps when I have a moment.

Yeah, baby! That is what I’m TALKING about!

Much better, but still no long distances. I was actually hit yesterday, though, which blows. Not bad, but it did wreck up my bike.

ALSO: I am loving the scrambling, hapless McCain…he is SO screwed over this bailout and he knows it. There aren’t enough dirty tricks in the world to cover him on this…..

I haven’t followed the news at all today — what’s all this about the debate maybe not happening and all?

@Tommmcatt Yet Again: My God! I’m glad you weren’t injured, but really! I remember when my son was hit. Also not injured, but it just really pisses me off when people in cars hit folks on foot or bikes.

My love is Adam Beach – with the long hair and not on Law and Order. Have they explained his Indian Country accent on L&O? I don’t get it. And I miss his pretty, pretty hair.

So was I the only one who survived the fallout from Dubya’s speechifying? The only way I made it through was by watching his address on the Spanish channel: A soothing, melodious male voice dubbed over Chimpy’s grunts, not a word of which I understood. Viva la Telemundo!

@flippin eck: That’s got to be the best way to listen to him. I get embarrassed whenever I hear him speak. Like that feeling you got when you were a little kid and something absolutely mortifying happens — I go there emotionally every single time I remember he’s the fucking president.

Oh for godsake. WordPress said my user name was invalid, I re-registered, and then it took me to the blog dashboard.
Had to work late so listened to chimpy on NPR. It’s still painful, but not as excruciating as having to watch. Like JNOV, I cringe.

Shit, It took me 20 tries with the fucking Woodpress that said every permutation of my name was invalid but somehow I logged back in when I screamed “FUCK” and hit the keyboard with all my fingers at once.

@TommyKatt: Sugar, you okay? What happened? You got hit by a car? Do you have a cute Asian male nurse to get you back to health?

@JNOV: I have the same reaction to Shrub. It reminds me of when my mom would show up to my elementary school off her meds. Except now it’s the whole world – not just the 2nd grade – laughing at me as to who is my leader.

@SanFranLefty: Well, if only I had direct server access, I could—

Damn. There goes that excuse.

RML is also having login problems, although his registration came through. I’ll see whether I can trace the troubles during the Wee Hours that await.

WHEW! i had to kick down wordpress’ door to get here!
they did eventually give me an amusing passcode. contains: me uu ky.
looks good nojo, as does our merry band of malcontents.
i’m hanging, i’m lurking, and when the shock wears off, i might even say something.

@JNOV: I tend to throw things at the teevee. My fambly gave me soft spongy things so I don’t break the set.

Oh, I’m fine. I’ve been hit worse. Just some road rash and bruises, and that just makes me feel butch. Plus, you know, I always have Mr. ‘Catt, who is one fine Fillipino dude, to, um, nurse me.

@burned: How’s the Provo recovery effort going? Can you share with us any adventure stories from the initial days back, when you were helping with aid to outlying people? And finally, did you get rid of all the slime in your life (double meaning intended there, obvs). Sorry, I hope I’m not being too nosey, it’s just you’ve had such drama lately and I’m hoping the denouement is going okay…

@flippin eck:
provo is up and running. the only evidence of near catastrophe is the remaining downed trees and roofing repairs everywhere.
i’ve been working so hard to put my house back in order, and it was great therapy to have that distraction and my gleaming funky house.
hey! i even have a more panoramic view of the sea without the trees!

as for the other slime, it’s complicated and appalling and unbelievable.
chapter 666 of ‘as the stomach churns’ forthcoming.

Hey kids, love what you’ve done with this place!

All I had to do was re-register my moniker with woodpress and they emailed me a p-word. No idea if any of my gravatar images will appear; I am feeling rather Che/Elvis today, so maybe….

Oh, and does Geezer have egg on his face or what? “I’m getting back to Washington” then he arrives and they’re all like ‘hey Geeze, we’re done, WTF are you doing here?’. That 4pm confab with Boosh is gonna be a hoot!

@burned: Ugh. My condolences on still having to deal with Mr. fuckwit. I’ve found that cuddling the furbabies always works magic in times like these.