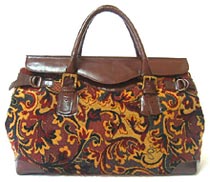 Did you know John McCain is a former POW? Strange but true! Seems the Geezer spent a few years cooling his heels in Hanoi while Democrats were figuring out new ways to disgrace America.

Or maybe you have heard — McCain’s been using his POW experience as a political cudgel since his first race for Congress, in 1982. Some fatuous opponent accused him of being a carpetbagger, and the Geezer’s response is legend:

“I wish I could have had the luxury, like you, of growing up and living and spending my entire life in a nice place like the first district of Arizona, but I was doing other things. As a matter of fact, when I think about it now, the place I lived longest in my life was Hanoi.”

Good day, sir! And for any voters who missed that thrilling exchange, here’s the ad that saturated local television:

That would be McCain limping off a plane after his release as a POW.

As for the carpetbagging, we know McCain married an Arizona beer heiress, so what’s the problem? Turns out it’s not Arizona as such — instead, a Congressional seat opened up, and the McCains quickly moved to that district.

In other words: One of those houses the Geezer tends to forget is the one that qualified him to run for Congress. Cindy bought it. And soon as he won his first Senate race in 1986 and no longer needed the district residence — she sold it.

Which brings us back to the quote. Opportunistically moving into a Congressional district may have raised uncomfortable questions during McCain’s first candidacy. He learned in 1982 how to shut up such questions, and he’s been pulling that move ever since.