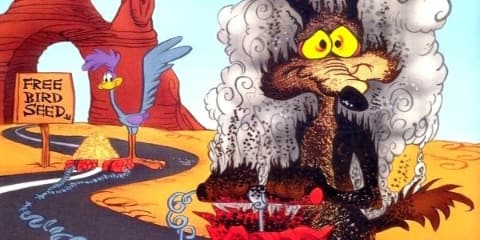 The funniest thing happened last week, and we were afraid to talk about it.

Actually, that’s what’s funny about it.

We modern types don’t understand tragedy. We use it as a placeholder for Seriously Bad, but we forget its source. Tragedy, as the Greeks knew it, arose from within, a character flaw turned on oneself. It wasn’t Bad Luck, but Bad Karma. There was a lesson in that, what we might loosely translate as Don’t Be an Asshole. The Greeks knew their shit.

Good comedy arises from the same source. We like to see the fathead taken down a notch, the underdog get his comeuppance against the arbitrary Powers That Be. We like to see Wile E. Coyote blow himself up in his quest to eat the Roadrunner.

Which brings us to Gender-Reveal Parties.

We don’t know how they started, how they became A Thing, we just knew from the moment we heard about them that they were profoundly unlikeable. Perhaps it’s just our fogeyness, having happily spent many years without them existing in the world, but the idea that you need to gin up a big event to disclose whether your baby has a dick seems grotesquely self-involved to us. It’s not about my kid, it’s about me.

Baby Showers? Sure, we all need a hand getting started with a new critter in the house, and what goes around, comes around. But while it’s pleasing to know whether that bun in the oven manifests Tab A or Slot B, you couldn’t just, like, tell us?

Actually, it’s not quite that. If gender-reveal parties were merely something that got an occasional feature in the lifestyle section, we’d think “well, that’s stupid”, and move on. We have plenty of other things to enjoy detesting, and if people want to be idiots on their own time, that’s their business.

No, it was the pyrotechnics that set us off.

Especially the one that set off a 10,000-acre fire in California last fall.

“Smoke-generating pyrotechnic device” was the cause. So maybe, uh, don’t do that. Don’t play with shit even experts can’t always manage, like we learned that Fourth of July in San Diego when our apartment shook like a jet just crashed.

Maybe just pull a blue card out of an envelope, y’know?

But no, people don’t know. You hear what someone else did, and you just have to top that. You have to make your pointless self-aggrandizing gender-reveal party one to remember.

It’s hubris as arms race, is what it is.

And so when you hear about an expectant dad who blew himself up creating one of those dangerous infernal contraptions, whatcha gonna do?

That’s the last time he shops at Acme Party Supplies!

This doesn’t qualify for a Darwin Award, because procreation was achieved.

And so on. We can’t help it, really. We’re not just punching our Ticket to Hell, we’re getting a free coffee with it. We’re sorry, but a dude blowing himself up making a gender-reveal bomb is funny. The Greeks would get it.

Ah, but it’s real. A man is dead, he almost took his brother out with him, his wife is widowed, and at some moment in the future she’s gonna have to tell the kid what happened to Dad.

Okay, that’s funny too. Except for the years of therapy required getting over how your father died telling his friends what you were packing downstairs.

We’re not even bothering with the Too Soon figleaf here. A generation or two hence, anyone who remains walking the Earth is free to laugh without guilt, as we all do after a respectful intermission. But we were going for the gusto the moment we heard about it.

Reading the room, we sensed that maybe we shouldn’t be robust about our laughter, that the death and its consequences were maybe a bit much for our acquaintances to savor as we did, that going there maybe wouldn’t be appreciated at the moment.

And then we did anyway, because that’s just who we are. Only human!

And that’s really the point. We feel no guilt in the end because there’s nothing to feel guilty about. We’re not going to laugh in the faces of the survivors — that would be cruel — but we are going to laugh. We’re going to laugh at the stupidity of it, not because we’re better than that, but because we’re all like that, only human, stupid in our own special ways, although usually not fatal.

The Greeks got that one, too. Because when you think about it, Oedipus Rex is a great comedy.

This is ongoing escalation of the ammosexual culture. These explosive devices are made of a legally available (=8-O ) explosive called ‘tannerite’. It is a impact explosive, basically you shoot it and it goes boom, because apparently just putting holes in things is no longe stimulation enough for thse jaded ammosexuals.

Dumb fucks have been killing and maiming themselves on the regular for years with this stuff.

@bruce.desertrat: Yeah, I went looking for a story on the incident, and it was just the latest “reveal-party death”. This month.

“Idiots, explosives, and falling anvils …” Isn’t that what life is all about?