Remembrance of Nothing Past

Nightmare at the Museum 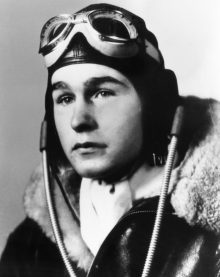 Gave us W (and thus hundreds of thousands dead), Dan Quayle, and Clarence Thomas, among other things. His other children, and now his grandchildren, continue to damage the nation. Fuck off, sweet prince.

Bush the First did sign the Americans with Disabilities Act, which was a game-changer that tremendously improved the lives of countless people and is now so thoroughly integrated into American life that we take it for granted, so I will give him that.

Otherwise, he was just one of the usual kleptocratic white trash supremacists that our political “system” barfs up every four to eight years. He was the last “moderate” KKKountry KKKlub conservative in office prior to the extremist, face-eating, bath salts cannibals into which the Rapeublinazi party has now degenerated, so that’s notable.

Spawning the Dumbya disaster definitely punched his ticket straight to hell, so he and Babs will be 2gether 4ever.

Bush’s worst legacy wasn’t even his fault. One of the major impediments to his reelection was his broken promise not to raise taxes. Now, Bush should never have made that promise in the first place but he at least had the sense to understand later on that if he didn’t raise taxes the country would be overwhelmed by crushing debt. He actually did something about the debt, as opposed to using it as a campaign issue-cudgel and then forgetting all that and exacerbating it while in office. Today, however, every Republican got the message: never raise taxes. The voters will never punish you for increasing the national debt, and so a significant percentage of our tax dollar goes, not to repairing infrastructure, not to providing services, but just to servicing the debt… which, let’s face it, like most debt is largely held by the wealthy.