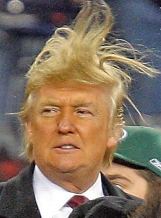 “Jon Stewart is pretty great at skewering Donald Trump, and Donald Trump is pretty good at typing on an electronic device in order to post a short message on Twitter. Trump struggles in this asymmetrical warfare. On Wednesday, he lowered himself — a major feat in itself — to outing Jon Stewart as a Jew. ‘I promise you that I’m much smarter than Jonathan Leibowitz – I mean Jon Stewart @TheDailyShow. Who, by the way, is totally overrated,” Trump tweeted. He then defended his hair, claiming it is not a wig.” [The Atlantic Wire]

Then there was Spy Magazine’s classic description of Trump as a short-fingered vulgarian.

One wonders if it would be prudent to add more invective to the list of Trump descriptions. Because anti-Semitic is not that funny.

I think his hair is an alien symbiote. Trump is living proof that inherited wealth makes you emotionally stunted

The Trump tries to figure it out:

Does anyone care what Donald Trump has to say about any subject?

proof that the SFV doesn’t watch the show. Jon does not miss an opportunity to yell, I’M A JEW. some outing.
this is an old post, i’m catching up, without comment except now, because Bloggie, Dodger and I are your token Jews here at Stinque and are compelled to.

the outing i’m waiting for is bill maher. yeah yeah, you went to catholic school. your father is a Jew, bill. why you are a confused atheist.