Dueling Douchebags of the Day 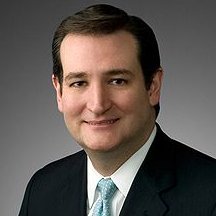 I can’t decide. This asshole?

Sen. Ted Cruz (R-TX) says that he is prepared to make “all available resources” available from the federal government to assist in the recovery after an explosion at a fertilizer plant in Texas — but the senator voted against aid for victims of Hurricane Sandy earlier because he said it was “pork.” 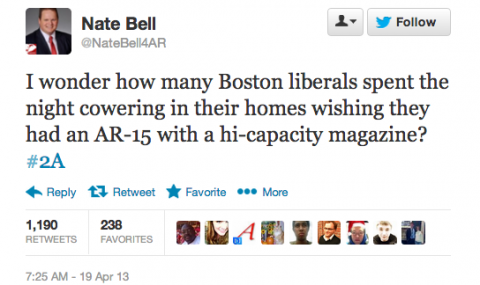 What Rambo Bell forgets is that there were a lot of amped up cops with itchy trigger fingers who would dearly would have loved to pop the Marathon Bombers and if some dumb Masshole waved his AR-15 in their general direction they probably would have wasted the dumbass in a hail of bullets.

Didn’t take long (hah, Twitter!) for the masses to respond.

It’s permanent Thanksgiving. All your idiot relatives are there flapping their gums but you can’t tell them what you think without distressing your mother.So you go outside and get drunk. Then later you throw up on the turkey and suddenly you’re the bad guy.

Bell wins that one easily. Cruz’s comment is stereotypical political “my constituents are more worthy than your constituents” hypocrisy. It takes a special kind of asshole to kick a town while it’s down.

He is SO rendered and tortured right now.

@Tommmcatt Can’t Believe He Ate The Whole Thing: It’s akin to “hot pursuit”: If you can justify Imminent Threat, you get a legal time-out before doing the Joe Friday dance, in order to get “actionable” info.

I know Civil Libs are crying foul, but it hasn’t tripped my wire yet. Maybe it should, but I’m just not, like, y’know, feeling it.

@nojo: I can’t believe the administration’s take on it: don’t miranize him, but divert him into civillian courts. It’s like a recipie for appeals.

@Tommmcatt Can’t Believe He Ate The Whole Thing: My amateur understanding is that the Patriot Act (or some such) grants him the authority — there’s like a 48-hour window where you can do this, if you can justify it with National Security.

Now, who gets to rule on that, dunno. But he’s not baldly flouting the Constitution — Congress already did that twelve years ago.

And it’s because he’s running it through a civvie court that I’m not yet bothered — he’s not ginning up “enemy combatant” and tossing it to the military.

I know I’m in the minority among Civil Libs on this — even some geeks I follow are cranky about it. But to twist a metaphor, so far my gut response is to shrug my shoulders.

@Tommmcatt Can’t Believe He Ate The Whole Thing: Ah. Turns out I’m blowing smoke out my ass. Imagine that!

There is one specific circumstance in which it makes sense to hold off on Miranda. It’s exactly what the name of the [public safety] exception suggests. The police can interrogate a suspect without offering him the benefit of Miranda if he could have information that’s of urgent concern for public safety. That may or may not be the case with Tsarnaev. The problem is that Attorney General Eric Holder has stretched the law beyond that scenario. And that should trouble anyone who worries about the police railroading suspects, which can end in false confessions.

I remember the background now. No law involved — Supreme Court ruling. But a ruling in a very specific case, where a suspect’s holster was empty, suggesting a gun laying about somewhere. “So, suspect, where’s the gun?”

Bush and Obama — Ashcroft and Holder — have abstracted that practical example into something more general: “So, suspected terrorist, who’s your handler?”

That is prima facie incriminating information, if given, and “railroading suspects” is exactly what the Miranda case was about. (The broader concern was railroading innocent suspects.) So, if I’m to be on the side of the Civil Lib angels, I should join the chorus of people who are bothered by how Little Bro is being managed.

Which puts me in Very Bad Company. But it’s not fuck the legal politeness, dude’s a fucking terrorist, which is the typical response. It’s that they had a lot of bombs, and were gleefully scattering them about. Literally, Public Safety: Have we found them all?

I’m no fan of Eric Holder — this was the dude who dutifully carried out the last-minute Clinton pardons — and I’m certainly no fan of the alternate-universe justice we’ve created since 9/11. But in this case, while I should fret, and respect anybody who does, I just ain’t feeling it. Find the damn bombs.

When the US Attorney stepped up the mic last night, there was a whoosh of disgust on my Twitter feed: She’s the one who hounded Aaron Swartz to suicide over bulk-downloading academic journals.

@nojo: In this case, it’s less about “Hey kid, who’s your handler” and more “Hey kid, did you and your bro leave any more pressure cooker bombs sitting around we should know about?” So far no indication of a terrorist handler other than dead big brother.

@SanFranLefty: And yet, Little Bro was still partying Wednesday night.

From accounts so far, Big Bro wore his radicalization on his sleeve. You may not have seen this coming — the in-laws certainly didn’t — but he was changing.

Meanwhile, Little Bro still was doing what 19-year-olds do, on Twitter and on the ground.

I don’t think the word is sociopath, but it’s something like that. He was following Big Bro into Hell, but he was still fronting.

I thought that there was a case in N.J. maybe in the ’80s where a suspect was tossed in the clinque on a Friday evening and forgotten until Monday A.M. without being charged. He was then released. SCOTUS was okay with that because the police just were too busy that weekend to determine any quicker if they want to bring charges or not. I think they said the police could hold a suspect for 72 hours without charging him with a crime. Are they even required to Mirandize before they officially charge?

@DElurker: I don’t think they need to Mirandize before they charge. But I’d guess that the P.D.’s office is reviewing their form motions to suppress for Miranda violations about now.