Stinque
Home Latest Comments Log in
If it smells, we’re on it.
Stinque
Cassandra was right.
Happy Holidaze

I took Dodger and Ms. Dodger on a road trip north to Point Reyes. Despite the sign, we kept walking. 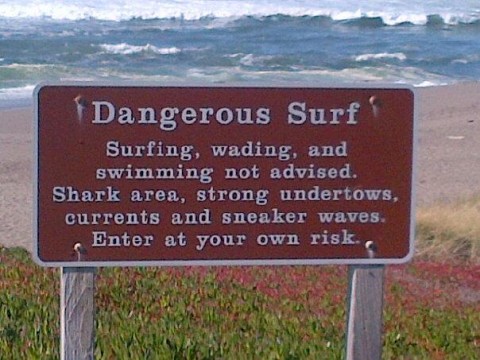 @JNOV: I refrained from pointing out in the alt-text that there were three J.D.s wandering around.

@SanFranLefty: :-) That’s the only shark/lawyer joke I know.

Have you hugged your shark today?
From 2002: Osprey Reef, Coral Sea
http://www.diverdan.name/whitetip.jpg

It’s sorta like posting on Stinque but with less backlash and backbiting.

I am imagining a giant wall of sneakers. sneaker waves?

@RevZafod: I’m confused. I meant the Army does its medals right, esp w/r/t DD214s so I can immediately see if someone was boots on ground. “RVN” and “ARVN” are prominent on Army DD214s and other documents, so then I can move forward with processing the claim. The backlog is a disservice to vets, and our file bank at my one regional office looks like the warehouse where they hid the Ark in Indiana Jones.

I wasn’t saying who or who doesn’t qualify in my eyes and deserves benefits — I was saying some medals that were given to people who were *not* boots on ground don’t help me determine who was where and when.

A big thing to look for is the V on certain medals, because the V establishes boots on ground and combat. Then I can give the green light on presumptive conditions the vet might be claiming, but I have to *verify* boots on ground *first*, before I can say this vet was exposed to AO or combat. We’re getting more latitude, but right now we’re kind of stuck.

I think you think I was saying you didn’t serve with valor. That’s not what I meant at all. All I’m saying is that the rules (and I hate them) that I go by say you need a V on certain medals to verify boots on ground or PTSD stressors. The stressor rules have been relaxed so that a CIB will at least get you an exam.

Navy DD214s are a mess and don’t always have the medals listed, and each time you reenlist, you get a separation DD214. So, a retiree can have over four DD214s that I’m trying to certify if they’re not certified and again I’m trying to connect their time and place of service to certain benefits they are claiming.

Does that make sense? I try to service-connect everybody.

I didn’t mean to offend you.

My medals are the ones everyone gets and don’t mean crap. I’m not talking about other people. The rules on a lot of medals change, and the value of the medals can be diminished when it comes to using them as evidence for VA purposes.

ADD: “ARVN” and “RVN” are the same thing — the vet was physically in Vietnam. The Army puts those on DD214s, but a lot of the services don’t. So, when I wrote “RVN or ARVN?” I wasn’t asking what kind of vet you are; I was referring to what you have on your DD214. The style of DD214s has changed over time. The ones from WWII are very different from the ones from GWOT. If “RVN” or ARVN” is not on a DD214, I have to look in other places to see if a person was ever treated in a clinic in Vietnam or maybe their ship docked there and they set foot in Vietnam. Setting foot in Vietnam is enough for us to say, “Yep. You were exposed to it.”

After 30+ years of the government denying that AO is dangerous and that even hearing about a friend dying in combat can cause PTSD, it’s good that it is getting its act together, but there’s still a long way to go. What about the vets who serviced the AO planes on ships and outside of Vietnam that never set foot in Vietnam? Why aren’t their illnesses presumptively connected?

We paid out over $3B to Vietnam vets (and sometimes their families) who had previously been denied benefits — the payments were retroactive to their initial claims that had been denied. It might not be enough, but at the very least it’s an acknowledgement that they were fucked over big time. Sometimes that helps.

Now we try to process claims before vets are discharged so they can get treatment, keep their homes and feed their families. That’s the new model. The goal is processing a claim within 120 days. I’ve seen claims so old that documents are disintegrating. We need to do better.

Also, good thing Benedick wasn’t with you, since the sign doesn’t say anything about paddling and he may have been wont to paddle.

A fine time was had by all, thanks to Lefty.

I just watched the season conclusion to Downton Abbey. I feel that I’ve been jerked around by the writers.

@Dodgerblue: I haven’t been able to confirm, but I saw suggestions on Twitter last night that Dude quit the series, and that was his send-off.

But still: Pulling that move twice is a tad noxious. The first time made dramatic and historical sense. The second time was a cheat.

Although I’ve also seen suggestions that the fourth season open with Patrick Duffy in the shower.

@JNOV: I wasn’t offended. I suggest we take this outside, and not in a bar fight way. I just don’t want to put all my personal info up here. See that Hug the shark post above? From that you should be able to email me and I’ll give you more info on my DD214. Anything before the @ works. That should be obscure enough for camouflage.

And Julian Fellowes points out that while you can have a Downstairs character find another job, there’s not much to do with Upstairs characters but send them to America or kill them off.

One by childbirth, another by motoring accident.

Or, if you’re Upstairs Downstairs, send a quitting actress to a nice journey on the Titanic. But Downton was about ten years late for that.

@nojo: Well, they could have sent him to Australia to study kangaroo farming or something. I’ve pretty much lost interest in the show now. Bring on Wallander.