Stinque
Home Latest Comments Log in
If it smells, we’re on it.
Stinque
Cassandra was right.
Fashionistas, FLOTUS Watch

And Not a Cardigan or Boob-Belt To Be Seen…

When Shelley Oh! hits it out of the parque, it is great.  Jason Wu, who designed her dress for the first inauguration, got the honors again. 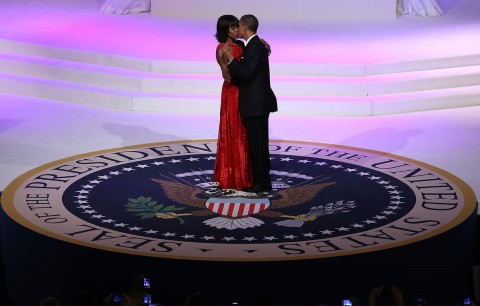 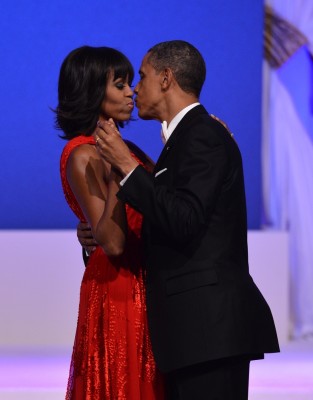 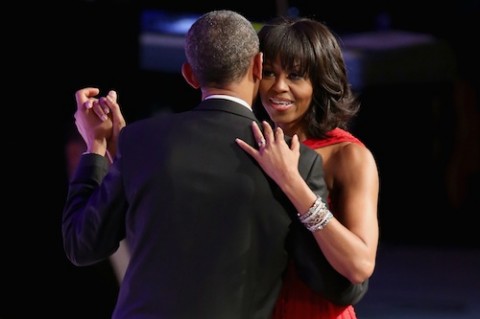 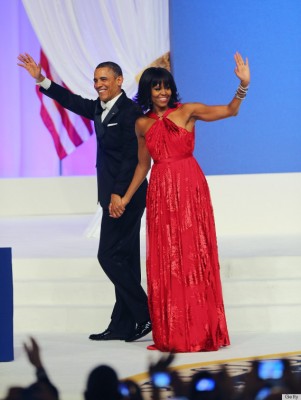 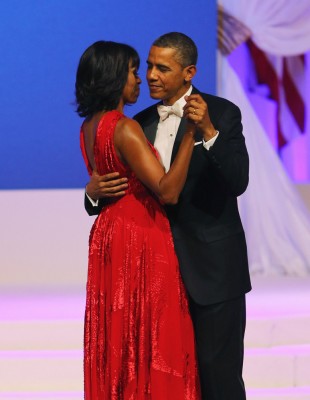 Here’s why I think it works. Some might argue it’s a bit matronly on her – a slightly more nipped in skirt would have worked, and shown off her curves more, but the fabric is light and relatively thin and that probably could have come off looking slutty. The bodice shows off her most awesome assets – her arms, shoulders, and smile – and the neckline eliminates the need for a necklace which would have been flirting with disaster, given some of her past disasters in accessorizing.  The color pops against her skin tone, and sets her off against Black Eagle’s tux. And the makeup looks like it was done with a lighter hand than she sometimes has.

Okay, give me another hour and I figure I’ll look at it again and decide I hate it or I’m meh. But right now, I’m impressed. Her gheyz did her well tonight, perhaps inspired by Unicorn’s shout-out to marriage equality.  What say you, Stinque Fashionistas?

Maybe in person I’d like it better but my reaction to it in these pictures is “meh.”

The dress is beautiful. Now I get the hair. It’s too young for her. It’s mutton dressed as lamb but of a piece with the gown. Imperial hip. She should have been wearing a hat outdoors today. Or worn her hair up. One is not Jennifer Aniston.

But the eyelashes! Dear God. Even boy dancers at the London Palladium would have considered them OTT. Who is putting slap on her eek? And what are they teaching those girls?

But a supremely elegant and accomplished woman. She almost deserves Him. Sigh.

No no no, you can’t nip that in, it’s a state gown, it’s not about fashion it’s about power. The complex layers of color are extremely well done and the lack of jewelry says USA: we do not do tiaras, fuck you France. The cut and fit are brilliant: the leader of the free world smooching with the missus on what looks like a nuclear silo is what gives me pause.

@Benedick: Are those her eyelashes or her bangs hanging in her eyes? I think that’s a bit of my issue with the bangs.

She appears to be a better dancer than her husband. I feel his pain.

Eyelashes? We’re focusing on eyelashes? C’mon. She’s a 5’11” brick shithouse-build with the upper body of an athlete, in a stunning red gown. Beautiful eyes, striking facial structure. What did he do to deserve her?

@Benedick: I thought the hair looked like Magneto’s helmet from the X-Men movies.

@redmanlaw: I would be happy to relieve her of the burden. I could so feel his pain. And perhaps talk him into slightly less sensible shoes. BTW. Was thinking of you in NM and hoping none of that got near you.

@Dodgerblue: good God look at him!

@SanFranLefty: Bangs over 40 never work. The eyelashes look like a Japanese monster flick.

@Benedick: @SanFranLefty: The eyelashes are in Liza Minnelli territory. Hairdressers are always trying to talk women over 50 into bangs to hide any lines that might be appearing on the forehead. Always a mistake. I don’t think she has any need to worry about wrinkles, and better wrinkles than bangs any day.

OMG! I just watched the first 10 seconds of the video of O&M dancing to Jennifer Hudson butchering Al Green!

This dress reminds me of the one she wore to the state dinner with QEII.

@Benedick: We don’t do tiaras, but I must confess I wouldn’t say no if Lizzy let me borrow the one she’s wearing in that picture … or this one. So sparkly.

Oh man, I just don’t know. The bangs are better with her hair softer and flipped out (less helmet head), but they’re still wearing her. And the dress is a lovely color, but it gobbles up her torso just as much as many of those boob belts do. Does she really have that short a torso? The sheath dresses we’ve seen her in lead me to believe she doesn’t, but she insists on wearing such high waists that it often appears that she does.

@flippin eck: I’m with you, the waist on that dress is too high, which is something she seems to insist on doing. Fortunately it’s not as bad as some past offenders, but it’s such an odd look for a gown that looks like it’s trying to be modern.

I don’t know anything about “fashion”, but was required for professional reaons to weigh in on the Shelly Eye Roll At Boehner video. A separation of powers discussion, etc. What happened was he nudged her arm in the course of a chat with Black Eagle, no doubt referencing her gym-toned guns. Probably a “you can’t control these guns, amirite?” joke, in between Lucky Strike-infused chuckles. Or is Boehner a Merit Lite man?

But Shelly clearly throws off body language beyond the eye roll. Go to tape – there’s one eye roll, then she throws up the left arm and elbow in a clear defensive posture, low post learned from her brother perhaps, and Boehner continues to jab. It was a throwdown, and Momma Eagle didn’t bite.

@Beggars Biscuit: I thought she was rolling her eyes at both her husband and Agent Orange because they were having some stupid joke together. Per HuffPo, CBS hired a lip reader who said that it appears that Boehner jokingly asked Black Eagle if he’d had a chance to have a cigarette today or if somebody won’t let you do it, then jabbing Shelley Oh on the arm. If that is accurate, Agent Orange is lucky he still has use of his hand and she managed to not stab it with her fork (though she must have been hungry and grown up eating with a big brother, given the speed with which she was shoveling in the food).

@SanFranLefty: Maybe Boner was demanding that she testify about Fugazi?

Re: the new ‘do. Her side frizzies may have become unmanageable.
Bringing the hair forward fixes the problem. Face it our lovely FLOTUS isn’t getting younger. Perimenopause hair thinning is a problem for many women.

@texrednface: Sure, could be. But why are we diverting attention from the voluptuous posterior, exactly? I’d call that an asset to be cherished, not a deficit to be hidden. No, the pun was not lost on me.

She’s high-wasted. Deal with it, people. President McDreamy has got his hand on her waist. And it’s high. Which takes nothing from the amplitude of her lovely posterior. I’m sure her husband appreciates that. I’m just not sure why this is such a problem. Audrey Hepburn was dressed by Givenchy whose house style empire/small tits was waistline up under the armpits. Are we reacting to the fact that MO looks like a woman?

@IanJ: I’m with you. BTW, do you got a posterior to be cherished? I bet you do. Any pictures?

@Benedick: You had your chance when I was busily fantasizing about kilted warriors on a wind-swept heath.

@IanJ: I’ve come over all queer.