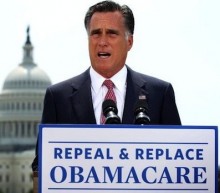 You really can’t make this up. Faced with polls showing that the individual elements of Barack Obama’s health care reform plan are still quite popular (indeed, moreso than the plan as a whole), GOP presidential candidate Mitt Romney, who has promised to repeal the Affordable Care Act (AKA: Obamacare) on “day one” of his presidency, has gone on record endorsing the crucial centerpiece of the plan. The New York Times reports:

The remarks, made in an interview on the NBC News program “Meet The Press,” seemed to mark the emergence of a less openly partisan, more general-election-oriented Republican nominee…

When the show’s host, David Gregory, asked Mr. Romney what elements of Mr. Obama’s health care program he would maintain, Mr. Romney said he would still require that insurance companies cover those with pre-existing conditions, just as the president’s law has.

“I’m not getting rid of all of health care reform,” Mr. Romney said, while emphasizing that he planned to replace the president’s plan with his own. “There are a number of things that I like in health care reform that I’m going to put in place. One is to make sure that those with pre-existing conditions can get coverage.”

Yet, as anyone who has studied the issue knows, a prohibition against refusing coverage for pre-existing conditions can only be accomplished if the plan includes an individual mandate. This is because if coverage is not mandated, many individuals would likely “game the system” opting out of paying for health insurance coverage until such coverage became necessary –that is, until they became sick. Under such a scenario, health insurance would necessarily become prohibitively expensive as health insurance companies lost the crucial revenue stream that comes from healthy people purchasing insurance to avoid finding themselves in the position unexpectedly become sick and unable to find an insurer that was willing to cover them. And once you’ve endorsed the individual mandate, everything else you might do to “repeal Obamacare”  is really just tinkering around the edges.

So either Mitt Romney has just endorsed the individual mandate (and by extension the bulk of Obamacare), or he has just endorsed a law, that if implemented, would bankrupt the private insurance system, thus necessitating a government takeover and single payer system.

We will leave it as an exercise for the reader to decide which of these two scenarios is the most likely.

UPDATE: Sarah Kliff, posting on Ezra Klein’s Washington Post Wonkblog notes that Romney has recently presented a plan that does not require an individual mandate… problem is, the plan doesn’t really prevent insurance companies from denying you coverage for a pre-existing condition, either. Kliff notes that in June a Romney spokesperson described for the Huffington Post a plan that:

…does not support the across-the-board consumer protections for pre-existing conditions as written into Democrats’ health care law.

“Governor Romney supports reforms to protect those with pre-existing conditions from being denied access to a health plan while they have continuous coverage,” she said first in a statement to the Huffington Post later obtained by ABC News.

The key phrase here is “continuous coverage.” Because if this is the “prohibition” against denying coverage for pre-existing conditions that Mitt Romney still supports, then the instant an individual loses his or her health insurance, that person once again become subject to being denied future coverage for pre-existing conditions. It is only insofar as individuals maintain continuous coverage that they are guaranteed future coverage if, for instance, they switch jobs or switch insurance companies. And, indeed, given that the 1996 Health Care Portability and Accountability Act pretty much already codifies this into law, it’s not entirely clear what, if anything, this particular Romney plan does to additionally reform the health care system. Perhaps what Romney wants, is to be able to claim that he supports a very popular provision of Obama’s health care reform agenda, without actually supporting it. In other words, he may simply be trying to play the American people for fools.

This said, it’s not entirely clear that this is what Romney is speaking of when he pledges to prohibit discrimination on the basis of a pre-existing condition. The Huffing Post notes that in the same Meet the Press interview Romney states:

“I say we’re going to replace Obamacare,” Romney said. “And I’m replacing it with my own plan. And even in Massachusetts when I was governor, our plan there deals with pre-existing conditions and with young people.”

Yet the Massachusetts plan Romney is referring to famously includes an individual mandate along with penalties for those who can afford to but choose to go without health insurance.

With a guy like Mitt Romney it can be maddeningly difficult to pin down his political plans and opinions, simply because he has been all over the map on almost all of them. Is he pro choice or pro-life? Does he support an individual mandate or not? Is he “better than Ted Kennedy for gay rights” as he once affirmed, or does he believe that marriage is “one man and one woman” as he now insists? Does he oppose taking america back to Reagan/Bush or is he “severely conservative?” Attempting to pin Romney down on a political position can be as fruitless as trying to eat soup with a fork.

Perhaps the only point in the Meet the Press interview where we can take Romney at his word is when he notes: “I say we’re going to replace Obamacare, and I’m replacing it with my own plan.” Whether this amounts to repealing the Affordable Care Act and replacing it with ineffective window-dressing legislation, or whether it involves merely changing the position of a comma here and breaking up a compound sentence there and adding his signature at the end, what Mitt Romney really seems to want is that whatever the American people end up with have his name attached to it.

The only chance Mittens has of winning now is if he shuts up and does not say anything till Nov 7.

And he just pissed of his moronic teabagging base.

Having forced myself to watch the interview — Mountain Lion/Apple TV is fun! — I would note that beyond David Gregory’s softballs, Mitt is learning his lines well. Gregory asked a bunch of obvious questions — the obvious questions that might be expected at a debate — and Mitt had his canned answers ready.

What I saw was Mitt simulating competence, which has more promise than Mitt simulating Reagan. One of the challenges for any candidate — especially somebody running against an incumbent — is convincing the public that he can do the job. Whatever you think about his policies, he ain’t no Newt.

The interview might as well have been scripted, which is why Mitt performed adequately. The debates will be interesting if — and only if — somebody throws Mitt a curve. That’s when you get the $10,000 bets.

Also, to today’s Obamacare “gaffe” — it only counts if the Wingnuts call him on it, like they did when Mitt’s flack tried it. Haven’t seen that yet.

As Bill Clinton pointed out, Romney/Ryan proposals aren’t strong on math. They never have any way to pay for what they’re promising. This is no different–it’s just Mitt saying anything he has to say to get votes. Like they’ve thought this through? Please.

@Mistress Cynica: Now that you mention it, Bubba interviewing Mitt — no holds barred — would be fascinating.

Let’s broaden that out: The problem with debates are the formats, and the moderators. Everything’s too constrained. Sit both candidates in an empty studio, turn the camera on — live — and leave it on for ninety minutes. You can’t force them to talk to each other, but even mutual silence would be fun.

@nojo: Mitt simulating Reagan. I swear he’s got a team training him how to impersonate Reagan. The dreadful laugh (see Jackie Mason on the subject), the homespun jeewillikers… I swear he’s aiming to be the Raygun hollowgram.

@Benedick: No team required — it’s all Mitt. That’s where his true instincts can be found: Stock your head with bumper stickers and deliver them like Ronnie. There’s the only there there.

All Mitt wants is the trophy, not the office. He has no idea what he would do — doesn’t really care — he just wants to be Preznident Mitt, and will say whatever it takes.

That’s the hollowness of the man: All calculation, no soul.