Stinque
Home Latest Comments Log in
If it smells, we’re on it.
Stinque
Miscellaneous Top Secret Documents.
A Thought At Bedtime

My Kingdom For A Red Sox Republican 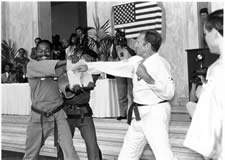 In the course of random thoughts about such things over the last few days, I came upon my memories of the way things used to be in, oh, the early 1990s.  The memories are fading, but it is still real close — the closing days of the analog epoch are totally foreign only to those who never lived in a world where the internet was not a ubiquitous presence.

In that age, we had Republicans like Warren Rudman, John Chafee, William Cohen and Jim Jeffords (pictured).  They shared two distinguishing characteristics.  One: they were from New England.  Two: they could actually THINK.

Now?  Maine (The Way Life Should Be) is no longer the state that gave us Olympia Snowe.  She has decided to hit the silk and jump from the GOP plane, in the wake of the wave that gave us the execrable Paul LePage.  Chris Shays is a vague memory.  New Hampshaah is knee-deep in Tea Party types — maybe not as Southern Fried as the rest of the cohort, but still a little bit nuts.  And Massachusetts may yet send Scott Brown back to the Senate.

Resolved: the House believes that the GOP will never go back to the days when sensible moderates were welcomed.  Floor’s open.

(P.S.: I refuse to use the term “Yankee Republican.”  It’s an article of faith, you know.)

I agree. That was part of the discussion I was having with my co-worker. She pointed out that many Republicans, like her, do not agree with their party’s stance on abortion, gay rights, and other social issues. I told her that unfortunately, the Republicans like her no longer control the party. Lie down with wingnuts, come up with crazy.

It’s kinda late to be making this request.

Goldwater remarked in the 1980s that the face-biting psychopaths had run off with the party.

CB, if you have time, write a fantasy novella of Eisenhower rising from the grave with a Gatling gun and hunting down the Bachmanns and Stephen Kings of the Congress.

It would be cathartic.

Chafee, Snowe, and Shays were largely moderates in name only … Chafee in particular voted con only when The Boy King was going to get what he wanted anyway. Snowe was a disgrace – gutting a bill, then voting against it.

You have to scrape away more rot to find fresh wood.

@blogenfreude: You have to scrape away more rot to find fresh wood.

I find that scraping makes the wood fresher.

Cue up the wingnuts whining, “Blacks are racist, we’re not racist” meme:

Mittens polling at 0% of the African-American vote

@Tommmcatt May Just Have Some MJ In His System As Well, So What?: Sorry, but I was at the ballpark watching Lefty’s Giants beat up on our hapless pitching. Oy.

@Dodgerblue: My heart flew up to my throat when Buster Posey blocked home base in the 7th and denied your Dodgers a run. Visions/flashbacks to his horrific broken leg injury came back to me.

@SanFranLefty: Yes, that was a tough play. He left the runner no real option but to body-slam him, Pete Rose style, which the runner didn’t do.

Timmy didn’t look very good last night — he’s lost some velocity and had control problems — but it was enough for the W.

@Dodgerblue: What the hell is going on out there? The Dodgers have gone from baseballs best to worst than most of the rest. What has happened to Kemp? We need Bob Costas to announce that the Dodgers are the worst team in the NL west/wild card race and then Lasorda can show up in the club house and start a “kill Costas” chant. That oughta motivate everybody and get things squared away.

@FlyingChainSaw: I can help with that. The ghost of Jimmy Doolittle can too. When Ike expanded many of the national park borders during his administration, the locals that lived inside the expanded borders became poachers when they refused to quit hunting land they had hunted for generations. Doolittle told Ike he could solve that problem by flying over the parks and machine gunning the poachers from his fighter plane. The ghost of Doolittle could fly over the teabagger sit ins. They seem to fancy that sorta shit. While the teabbaggers are gazing in wild wonderment at the WW2 vintage airshow, the ghost of Doolittle could open up on them shouting “I’ll tread on you, motherfucker”, “Time to water the tree of liberty, assholes”, or some other psychotic shit the teabaggers are so familiar with. What a great movie. I’m popping corn already.

@jwmcsame: People here are pretty fed up with Tommy and his BS. But — Dodger great Don Newcombe was at the game last night and got a well-deserved ovation. BTW Don is one of only two players to win the Cy Young, Rookie of the Year and MVP in his career. It was a sold-out game for — get this — Fernando Valenzuela bobblehead night. El Hombre was there (he does the Spanish language commentary) and threw out the first pitch. Given how badly our starter did, many of us wish Fernando had suited up and continued.

@Dodgerblue: espn classic showed the 30×30 about Fernando and the Dem Bums documentary 2 weekends ago. I didn’t realize the respect everyone had for Gil Hodges. I remember him managing the Mets, but I don’t remember his sudden death from a heart attack. How has Lasorda fucked up? I thought he was untouchable.

NFL in LA: Roger Goodell has announced that the Jacksonville Jags will have to play MULTIPLE home games in London in 2013. How can attendance and fan alleged support be so shitty that the league moves your home games to London? It’s gotta be in the plans to move them to LA soon, maybe to start the 2014 season. It makes sense because the LA Jags could stay in the AFC south and the current conference alignments can stay the same.

@jwmcsame: I always thought that Lasorda was a good PR guy but a lousy manager. He may be most famous for his “what did you think of Kingman’s performance” rant: http://tommykingman.ytmnd.com/.

I’m working on one of the LA football stadium proposals from the enviro side. The politics of moving a team here are ferocious and cutthroat.

@Dodgerblue: Wasn’t Lasorda a pitchman for some diet product back in the dark ages?

@karen marie still has her eyes tight shut: Yes, but he appears to have put back on all the weight he lost, and more.

@Dodgerblue: that’s great. thanx for the link. it’s playing cranked up all over the office right now.

When the Titans moved to Nashville, they built a new stadium of course. They built it across the river from where downtown Nashville butted up against the other side of the river. The area was disgusting before the stadium was built. They added a pedestrian bridge and other amenities and really spruced up a nasty run down idle industrial area.

@jwmcsame: Been to Camden Yards in Baltimore? I wish we had that in L.A.

@Dodgerblue: Been to Nationals Park yet?