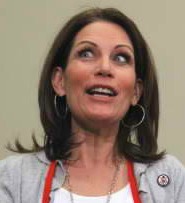 How can people keep sending this idiot to Congress?

Rep. Michele Bachmann defended her attempt to root out “deep penetration” by the Muslim Brotherhood into the U.S. government Friday, writing a 16-page letter explaining and expanding on her initial charges against Huma Abedin and others of being terrorist sympathizers. Bachmann’s letter came in response to a challenge from a fellow Minnesota lawmaker, Rep. Keith Ellison, a Democrat who was the first Muslim elected to Congress. Ellison last week asked Bachmann for evidence to support a series of letters the Republican sent to five national security agencies demanding investigations into alleged Muslim Brotherhood infiltration in their ranks.

If she was in the British Parliament she’d be out at the next election.

She been watching Sleeper Cell or the Manchurian Candidate again and no one on her staff tell her it’s make believe?

Some people shouldn’t be allowed to watch TV or movies.

BTW, if I had to do a stunt casting then she would be perfect as Eleanor Iselin.

Today’s mail brought an appeal from Michelle Obama. I opened it just after having spent a half hour plus figuring out by how much I have reduced our total indebtedness in the last six months. That answer was so encouraging that it gave me great pleasure to write what is for me a large check to Obama for America. It goes out in tomorrow’s mail. Since I’m a Hoosier, my vote will probably be of no help to the good guys in this fight. Indiana is almost certain to revert to type in November and vote into state and national office a phalanx of Republican powermongers, most of whom profess the noblest motives while acting and speaking with forked minds and tongues.

@lynnlightfoot: Impressed by you financial savvy. I mostly rely on But I’m Pretty.

If she were in Parliament and sent out stuff like this she would be prosecuted. Such speech is not protected in the UK. They send you to gaol.

As always, this is projection – between the rocks the MRFF keeps turning over and the well-documented pipeline from homeschooled Dominionist wingnut-larvae through places like Liberty U to assisting the GOP delegation, of COURSE they think everyone else has been stuffing the government with people whose loyalties are Invisible Friend first, party second, country a long third. *They’ve* been doing it for thirty years, after all…

@lynnlightfoot: Still and all, youdid something good. Always a plusto be on the side of the angels.

@Tommmcatt May Just Have Some MJ In His System As Well, So What?: See now, that just wouldn’t have occurred to me. “Plus 1” is it?

Crazy Eyes is too crazy for Senator Walnuts (actually a rather good screed by the senior Senator from Arizona).

@Walking Still: The old Walnuts emerges! Good for him to call Crazee Eyes on her McCarthyism.

Ultimately, what is at stake in this matter is larger even than the reputation of one person. This is about who we are as a nation, and who we still aspire to be. What makes America exceptional among the countries of the world is that we are bound together as citizens not by blood or class, not by sect or ethnicity, but by a set of enduring, universal, and equal rights that are the foundation of our constitution, our laws, our citizenry, and our identity. When anyone, not least a member of Congress, launches specious and degrading attacks against fellow Americans on the basis of nothing more than fear of who they are and ignorance of what they stand for, it defames the spirit of our nation, and we all grow poorer because of it.

@SanFranLefty: It’s like every now and then he snaps and thinks, “I was tortured by the North Vietnamese to protect and preserve this bullshit?”

@SuiteVirginia: Ah, speak of an angel and in one walks! How are you, my dear?