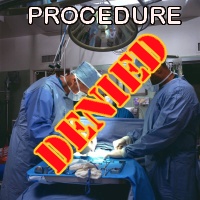 Remember Sarah Palin’s infamous death panels lie which was intended to derail the Health Care Reform Act? The charge was that under so-called “Obamacare” government burocrats would have authority to determine which needy patients live and die based on an economic calculus that weighs those individuals’ potential benefit to society against the cost of their treatment. The lie grew out of a dishonest representation of the President’s call for comparitive effectiveness studies on medical treatments that would save the government money by identifying and steering patients towards the most effetive treatments for their ilnesses. The theory was that ineffective treatments are simply a waste of money, and patients will most likely benefit from avoiding them. The death panel lie was so outrageous yet so pervasive that it was crowned Politifact’s Lie of the Year for 2009.

Well, fast-forward a year and guess what: we’ve finally got those death panels Sarah Palin warned us of. But don’t expect Palin, the GOP leadership or Dick Armey’s FreedomWorks to raise a fuss. That’s because these death panels are in Arizona and are a result of the GOP led legislature deciding that discontinuing Medicaid funding for certain organ transplants –even though this would mean almost cetain death for some 100 indigent patients–  was well worth the $4.5 million a year savings it would bring:

Effective at the beginning of October, Arizona stopped financing certain transplant operations under the state’s version of Medicaid. Many doctors say the decision amounts to a death sentence for some low-income patients, who have little chance of survival without transplants and lack the hundreds of thousands of dollars needed to pay for them.

“The most difficult discussions are those that involve patients who had been on the donor list for a year or more and now we have to tell them they’re not on the list anymore,” said Dr. Rainer Gruessner, a transplant specialist at the University of Arizona College of Medicine. “The frustration is tremendous. It’s more than frustration.”

Organ transplants are already the subject of a web of regulations, which do not guarantee that everyone in need of a life-saving organ will receive one. But Arizona’s transplant specialists are alarmed that patients who were in line to receive transplants one day were, after the state’s budget cuts to its Medicaid program, ruled ineligible the next — unless they raised the money themselves.

And in typically cowardly fashion Republicans who approved the cuts, when faced with public outrage, have since sought to blame the Obama administration for them:

The Republican governor has in turn blamed “Obamacare,” meaning the federal health care overhaul, for the transplant cuts even though the Arizona vote came in March, before President Obama signed that bill into law.

This episode is revealing, and likely portends the GOP legislative agenda that awaits the nation in January, and much more alarmingly in 2012 and beyond should the GOP gain control of the presidency and perhaps flip the Senate. Riding to political victory on a wave of populist anger over imaginary health-care cuts and large budget deficits, the party’s proposed legislative agenda would only exacerbate both these problems. It’s unwavering devotion to the reckless Bush tax cuts guarantees budget deficits far into the future, and proposals to replace Medicare and Medicaid with voucher programs mean that future beneficiaries of these two programs would get, not necessarily the medical attention they need, but only what they can buy with the limited funds the government has alloted them. Whether it be by explicitly denying coverage for expensive procedures (as in Arizona) or a refusal to pay more than a set amount for health coverage, the GOP plan amounts to the same thing: death panels by another name.

Of course they’ll have to continue to subsidize Rascals or their base of brain dead mostly white olds would never be able to vote.

Basically, if you want to know what the GOPers will do when in power… listen to what they call their oppo.

I have to say this doesn’t surprise me and frankly it’s not new. In the past few years there’s been cases in Florida, Texas, and Pennsylvania where children in foster care in need of transplants were kicked off of transplant lists because of the excuse that since they don’t have permanent families there’s no guarantee that someone responsible would monitor the administration of anti-rejection medicine, and track all other follow up care. (Including, cruelly and ironically enough, a kid removed from her mother for medical neglect!). Of possible interest to Talibunny, there was another situation I think in Michigan or Wisconsin of a little girl in foster care who had Down’s Syndrome and who couldn’t get a heart valve transplant for the same reason. Of course, I’m sure that the fact that Medicaid would have paid for the kids’ transplants had *nothing* to do with the decision…

Some of these kids wound up getting back on the waiting lists because of media coverage. I think one of them actually got the transplant (FL), not sure about the others.

And don’t forget, if you are too “rich” for Medicaid but have inadequate insurance, the hospitals often won’t even put you on the waiting lists so you’re SOL from the start unless you deplete your assets to qualify for Medicaid to pay for the transplant.

I’m sure all of the negative consequences of this decision will be remediated by Arizona’s wonderful, restorative, dry heat.

Thinking about offering yourself as a live donor? Good luck keeping health insurance once “Obamacare” is repealed.

But it’s all good because now there will plenty of organs available to those who truly deserve them — those who have the money to pay all the costs themselves.

OK. OMG. Bristol Palin, IN HER OWN WORDS, pwns Keith Olbermen who, it seems, mentioned her on his show.

Accusing me of hypocrisy is by now, an old canard. What Mr. Olbermann lacks in originality he makes up for with insincere incredulity. Mr. Olbermann fails to understand that in order to have credibility as a spokesperson, it sometimes takes a person who has made mistakes. Parents warn their children about the mistakes they made so they are not repeated. Former gang members travel to schools to educate teenagers about the risks of gang life. Recovered addicts lecture to others about the risks of alcohol and drug abuse. And yes, a teen mother talks about the benefits of preventing teen pregnancy. I have never claimed to be perfect. If that makes me the “worst person in the world” to Mr. Olbermann, then I must apologize for not being absolutely faultless like he undoubtedly must be.

Ghostwriting. Ur Doin It Wrong.

Given her recent performance on the Book of Faces with the other sister, had Miss Palin written the statement herself it would be: “Shut ur whole, Keeth y r u so gey?”

@SanFranLefty: My favorite canard is the Queen Mary.

Looks like someone borrowed mommy’s ghostwriter for a little while.

@Benedick: My favorite canard is in the freezer – well, about half of it.

I canard be bothered to think about Bristol Palin.

@Benedick: I was thinking about running a contest to count all the words Bristol doesn’t know.

Bristol: “Making mistakes” is one thing. But to champion the effectiveness of abstinence-only sex education after becoming a clear example of how disastrously *ineffective* it can be promotes you to a grade-A stupid cunt. Good night, and good luck.

@mellbell: Her dancing makes me want to duck down under the coffee table.