I Have a Homeopathy Degree — in Politics! 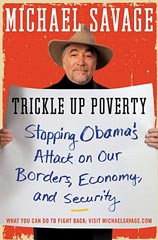 Title: “Trickle Up Poverty: Stopping Obama’s Attack on Our Borders, Economy, and Security”

Blurb: “Trickle Up Poverty, by bestselling author and revered radio host Dr. Michael Savage, is your best defense against the Obamanomics that are dragging the middle class, and everyone else, into a Marxist-Socialist death spiral.”

Review: “Listening to him talk about how he would put a blockade at the Strait of Hormuz so Iran could not get any oil in or out and how he would bomb their ports is ingenious.”

Second Review, Because We Can’t Decide Our Favorite: “I have done my homework and read some of the opposing viewpoints, namely the Communist Manifesto and the like.”

Third Review, Because We Have No Editorial Discipline: “I am a gay, gun-owning, award-winning libertarian Democrat. I admit these qualifiers only to show that the appeal of ‘Trickle Up Poverty’ by Michael Savage isn’t limited to political conservatives.”

Footnote: Michael Alan Weiner has a doctorate in “nutritional ethnomedicine” from Berkeley.

Of course, everything that a Demrat does is horrible.

Yet, when a GOPer does it. It’s WONDERFUL.

The right is not wrong on everything, but Savage seems intent on achieving personal perfection.

This is not helping.

How come all these books sound like they were written by the kid up the street who lights his toys on fire in the driveway with lighter fluid and who screams at passing cars, shits in his own hand and flings his shit at them?

@FlyingChainSaw:
Because they are.

@ManchuCandidate: Exactly! Hey, finally replaced the DOCSIS 1.0 box for a DOCSIS 3.0. Makes an enormous difference – even discounting the constant hanging I had with the old kit.

@FlyingChainSaw: Replaced mine a couple years back, and yes.

And no, I’m not going to explain what a DOCSIS box is. More fun letting the acronym hang nekkid.

Hey Lefty, your Gnats pulled their gnuts out of the fire today. The Braves don’t deserve to go forward after that one.

@dodger: I was listening to it on AM radio while in the Santa Cruz mountains – wish I could have seen it – makes up for Friday’s clusterfuck.

I flipped on the TV just in time to see the Braves collapse.

@Dodgerblue: I fired up the interwebs just in time to see the Oh-and-Four(ty) Niners nearly beat the Iggles, but for a tipped pass to Frank Gore for a surefire score in the final minute.