Stinque
Home Latest Comments Log in
If it smells, we’re on it.
Stinque
Mastodon: @stinque@mas.to
Architecture

Another Frank Lloyd Wright masterpiece I visited a few times in 2000 and 2001 – it’s in Western PA, about 10 minutes from Fallingwater.  I took a few photos, as you might imagine. This is the front of the house – the carports (Wright refused to build garages lest they fill up with crap) are off to the left. 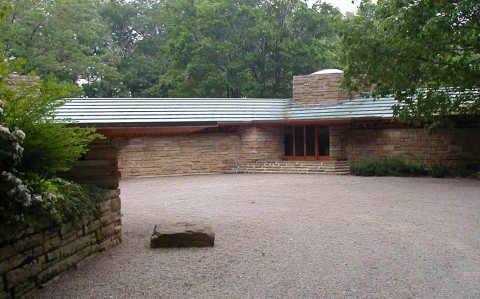 Yet the house looks like a fortress on the approach. 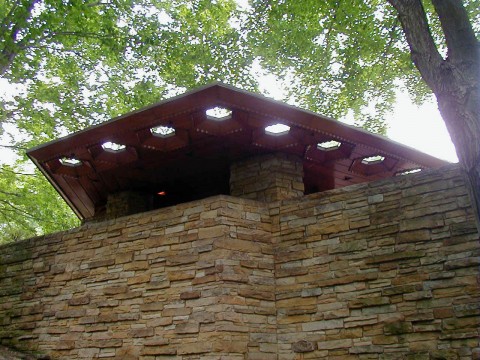 The house was built on a hexagonal plan, as you can see by the skylights cut into the roof: 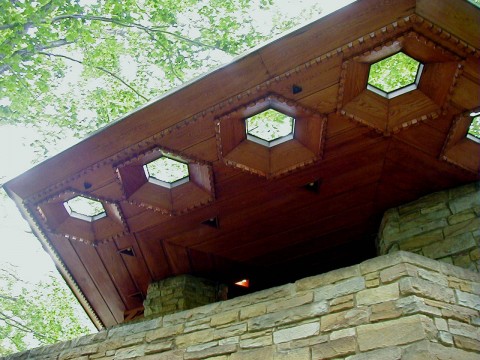 On the back porch, the skylights create a wonderful effect: 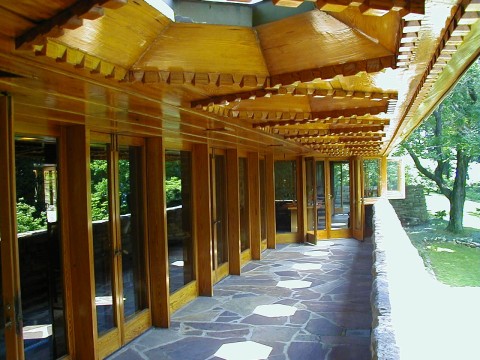 You are not permitted to take photos inside.  The house is owned by a British Lord and ‘architecture collector’, and he’s worried about security. Still, I could not resist (urged on by a renegade tour guide) taking this photo in the master bedroom.  It’s the corner of the house – yet Wright has thrown away the corner with his use of beveled glass. 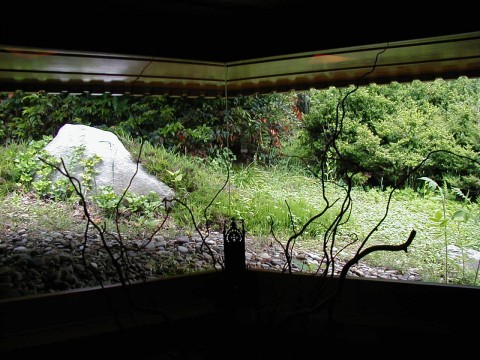 Lots of these windows at Fallingwater as well – I’ll post those photos as soon as I convert them from PDDs.

Another note about the back rooms, including bedrooms: the guide told me that Wright had “client-proofed” the house, in other words, configuring the furniture and the doorways so that the owner could not get the furniture out of the room Wright thought it should be in … controlling, anyone?

And this house was built on a large hill, but Wright did not build on the very top of the hill because, as he said, “you lose the hill.”  Here’s the view from the backyard: 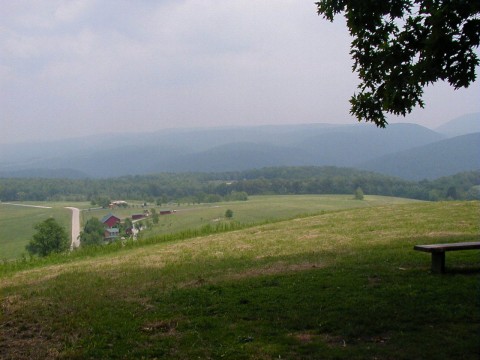 And here’s the backyard: 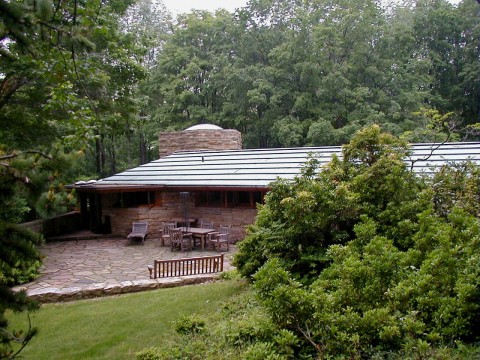 The owners, the Hagans, had a dairy.  When Wright insisted on his trademark Cherokee Red floors, Mr. Hagan objected, saying he’d worked in red-floored dairies all his life – he demanded, and got, slate floors.  It was always difficult to get concessions from Wright, but the house also has a small basement, which makes it unique – Mr. Hagan won again.  The basement is filled with plans for various Wright buildings that the current owner collected, and even though I was not supposed to see them, the guide let me leaf through them – it was her last day.  Glorious. If you can see this house, see it.  It’s one of Wright’s most impressive creations, in my opinion

One more thing – this house got the signature tile that Wright’s houses were supposed to have, but it usually got left out for some reason. 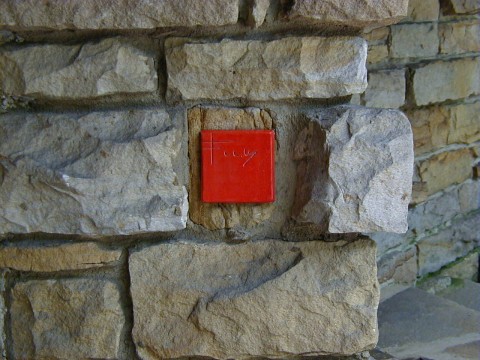 One more thing – a 10-year-younger me hanging out on the porch, wondering how much it would cost to reproduce the house in, say, Dutchess County. 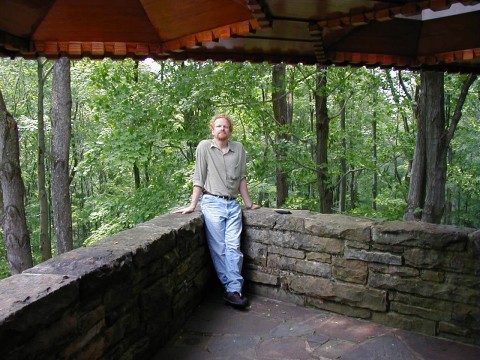 This is amazing. We have our own architectural correspondent and photographer. Did you Facebook the series?

I’ve been there… my dad the FLW fan took us to Fallingwater and this place.

@FlyingChainSaw: I don’t often facebook my posts, and I should. Next trip will be to see the Darwin Martin house. Shuffling off to Buffalo. And if you think this is something, wait until I post on a few more sites I’ve visited.

These pictures are awesome!

I love the way Wright also designed the furniture for many of his homes, and he was interested in creating affordable housing. Taliesin Architects have built some of these homes in Atlantic City. Good stuff.

I’ve got a thing for Louis Kahn. Have you seen My Architect? Kevin Bacon’s dad really fucked over Kahn and Philly. If Kahn had had his way, no one would drive downtown.

Kahn died alone in a public bathroom in Penn Station, and his body wasn’t identified for three days. He also had several families scattered about — they kind of knew about each other, and they kind of didn’t.

In the documentary, Kahn’s son tries to get to know his father by visiting his buildings and by interviewing his father’s cohorts. He talks with his siblings from the other families, and his mother is still convinced that Kahn was going to leave his wife for her. The movie is interesting on so many levels, but the son is kind of boring.

The Dhaka Assembly is my favorite, although he’s probably best known for Salk.

@blogenfreude: Woah. Can you mount them on Flickr or SmugMug, someplace where you can display large format files?

When you look at masterpiece work like this, and picture yourself living in it, you feel elevated and kind of thrilled, just at the thought. Can you imagine what a high it must be to wake up and walk through your FLW house to the kitchen, and then look out those incredible windows on to that incredible land swirling and rising around you?

Honestly, words fail. If you’re a lighting person–and I am–the beauty of Wright’s work (well, one of the many beauties) is that he availed himself of the natural light that floods a site like that. I cannot stand dark, claustrophobia-inducing spaces, and I have a feeling Wright couldn’t, either. He was an American genius who knew his topography and his lighting better than anyone I can think of.

@litbrit: If I had serious money, I would have some builder, a builder who understood the ethic of a man laying one stone on top of another, do this house for me. Or Jabobs 1 even – the first Usonian. Hagan, of course, is a bourgeois Usonian.

@litbrit: The only Wright buildings I’ve been in are at Talesin West and they are rather claustrophobic. The doorways were made for people under 5’7″.

This home appears to be a lot nicer than TW.

@TJ/ Jamie Sommers /TJ: Wright was about 5′ 5″, although his passport had him 2 inches taller because damned if he’d be shorter than his wife.