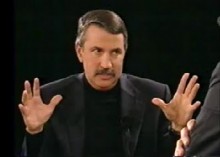 We have been reliably informed that the Iraq War is over but, as Atrios points out, we have left the usual contingent of troops behind. He decided to resurrect some old Richard Cohen, but we dug up some vintage Friedman (he of the 6 month moving deadline):

This column has argued throughout this debate that removing Saddam Hussein and helping Iraq replace his regime with a decent, accountable government that can serve as a model in the Middle East is worth doing — not because Iraq threatens us with its weapons, but because we are threatened by a collection of failing Arab-Muslim states, which churn out way too many young people who feel humiliated, voiceless and left behind. We have a real interest in partnering with them for change.

This column has also argued, though, that such a preventive war is so unprecedented and mammoth a task — taking over an entire country from a standing start and rebuilding it — that it had to be done with maximum U.N legitimacy and with as many allies as possible.

The column is the usual on-the-one-hand on-the-other-hand Friedman nonsense.  In the main, however, we must remember that he came down on the side of murdering a few hundred thousand innocent Iraqis and sending more than four thousand soldiers to die needlessly.

But he’s got his Pulitzers!

Nojo, have you read much from any of the serious people who have written on the topic of just who these al queada jihadis are? Their backgrounds, what is their mindset and worldview that led them to what they are doing? I have not read much, but, from what I have read, the surprising thing is that al queada, at least the leadership, and the pre-9-11 composition of the group, they are not poor kids, they were mostly from the arab middle-class, the kids of doctors and professionals, who had western educations. Yet they turned to violent anti-western fundamentalism. Hell, their leader was a millionaire, so maybe that set the pattern.

They were almost all saudis and egyptians, and it seems they were rebelling against, and angry about, their own governments closeness to the west, to the US, they didn’t come from the countries we regarded as our enemies in the arab world, they came from the countries that were, are, regarded as the most friendly. Their anger seems more to stem from anger at what they perceive as their own governments’ selling out to the west, than at western hegemony per se. A rebellion against their own governments, and a desire more to drive a wedge between their countries and the west, and the US in particular. They were probably very disappointed we didn’t retaliate against Saudi Arabia, that their attack on us did not sever the close ties between Saudi Arabia and the US, and that instead, we attacked Iraq.

Friedman is a fool, of course, and his thesis for why the Iraq war was worthwhile is sheer lunacy. But he got me thinking, because, really, noone, not one public thinker, left or right, seems to really understand and talk about what this all really represents, the social forces in the arab countries, the real nature of the jihadi movement. I wonder, is it really more an intellectual movement, a movement with more of a Trotskyite mindset, intellectuals, using muslim fundamentalism as a tool to enlist the street, the masses, to their cause, rather than a muslim, islamic, movement at all?

I’m just wondering, wondering if you have read more, seen any analysis you would recomend thats realistic and fact based, on these issues.

@Promnight: All cults recruit preferentially from privileged classes. Their members are mobile, educated, open to idea, have leisure time to investigative provocative philosophies and be brainwashed. It’s why a lot of big colleges have policies against on-campus recruitment and, in ones that have been stricken, response protocols and health office policies in place. The downtrodden can be bought off with potable water and health care for the babies. They don’t have time for non-sense.

@Promnight: It’s Bloggie’s post, but yes, I recall that many of the hijackers, like son-of-dynasty Bin Laden, were well-heeled. Someone can check my memory, but I think some of them spent some expensive quality time in Germany.

@FlyingChainSaw: Ahh, I see, thus the Tea Partiers being composed of the retired, those on disability pensions, and housewives. While not among the wealthy, these people are nevertheless “privileged” with the leisure time that allows their idiotic activities. This makes things somewhat clearer.

What I am finding interesting is the thought that their animosity is less against the US directly, and more towards their own leaders, for what they perceive as selling out to the west. If thats true, then the photos of W walking hand in hand with the saudi king, or regent, whatever he was, likely angered them more than our Ground Zero Mosque froufra has, they want us to over-react, they are probably disappointed that we let Saudi Arabia slide.

@Promnight: And I don’t have any good sources for finding out the events in the leadup to 9/11. If you want to read about the conservative paradise (but with universal health care!) the Bushies tried to set up in Iraq, read this -excellent.

Whats eye-opening to me, is I am starting to think its not a populist islamist movement, its not widespread among the people of arab nations, it is rather a movement of radical intellectuals. Of course, our wars have probably considerably strengthened their popular support, over the last 9 years.

@Promnight: Again, I’m working from memory, but their stated complaint goes back to the first Gulf War — when the Saudis invited our troops in to stay a spell.

It wasn’t quite foreign occupation, but that’s a finer point. As with any similar example, stage it in Kansas and see what happens.

@Promnight: No problem – I’ve been working so hard I’ve not been around much.

@nojo: I apologize for my lashing out at you. I am an ass, in the end. And I was probably an ass from the age of 1.

Actually, anyone who has had a child knows, their general temperament is pretty recognizable from about, oh, birth. I could tell from the pics of Baked’s grandson that he was going to be, well, Baked.

@nojo: The German connection is interesting because the closest Western analogy I can think of to Al Qaeda is Baader-Meinhoff. IIRC, that was largely an elite/children of the elite group of radicals/terrorists.

This is, at best, a loose analogy. The class and social issues in the Middle East don’t fit well into Western European molds. However, FCS’s point about where to recruit members for such fun and games is well taken.

@Walking Still: There’s an interesting movie out about Baader-Meinhoff.

@Walking Still: Their goal seemed to be somewhat similar to Manson, who wanted to ignite a war.

The Mainstream media’s blackout on any point of view that contradicted the offical W “they hate us for our freedoms” claptrap has created a vacuum, as far as accessible, and serious and informed, discussion, information, on the topic.

And, admitting that it was actually a small group of elite intellectual radicals, would have given credence to the still denied truth that its a problem which could be addressed through law enforcement, rather than military, action.

As I recall, Al Qaeda had very clear goals, and that they even told them to us:

1) Removal of all Western troops from Saudi soil–Check!

2) Draw the US “paper tiger” into unwinnable land wars in Asia–Check!

3) Bankrupt the US through a massive military build-up–Check!

So they’ve accomplished all of their goals–this handful of deadenders and losers–including totally discrediting the US in the eyes of the world, none of which would have happened without the Republican party, who were the best partners they could have asked for. The best “analysis” our lamestream mediatards, political and military E-leets can come up with is that “theys krayzee terrists ah-comin’ to getcha in Des Moines!!”

Yglesias fesses up about his war support:

Friedman doesn’t have that excuse.

@Original Andrew: Yup, they pretty much succeeded in all their goals. They were probably wishing for our retaliation to unleash a pan-arab coalition against us, they probably think that not happening was a failure, though.

Hey Walking Still, do you and the Missus want to have brunch, lunch, or dinner this weekend?

Oh, here, let’s nail Tommy on this one:

The president’s view is that in the absence of a U.N. endorsement, this war will become ”self-legitimating” when the world sees most Iraqis greet U.S. troops as liberators. I think there is a good chance that will play out.

Can’t wait for the I Heart the Aughts special.

For a fascinating look at the history of the Jihadi situation, check out The Power of Nightmares.

@Walking Still: That’s exactly what prom’s first post made me think of.

@Promnight: The IRA was different. Is that a comparison? That was a working-class movement. In its early days, however, it was very much a movement of the Upper-Middle Class. Sorry about that, you know how the English love to categorize. The teabaggers seem to me to be the US equivalent of the peasantry waving their pitchforks, looking for the biggest torch to follow.

@SanFranLefty: Yes. How about Saturday noonish? I’ve sent you an email with details.

@Promnight: I can’t resist in re you can tell from birth. My husband and I had two possible names for boys, Nathaniel and Nicholas. I took one look at the baby who had just emerged and knew at once that he wasn’t Nathaniel. That was exactly what my husband thought when he saw him.

i hold what i think is an unpopular view. who else doesn’t care about a mosque near ground zero? there are 7 million, law abiding, middle class muslims who call themselves true blue americans, some here many generations. who among us would like the world to judge americans by south carolina, or the aryan nation? however al qaeda got that way, they are still the lunatic fringe of the muslim world.

@Promnight:
my daughter is terrified.
he’s almost 2, so he’ll be commenting here shortly.

Have they all been captured?