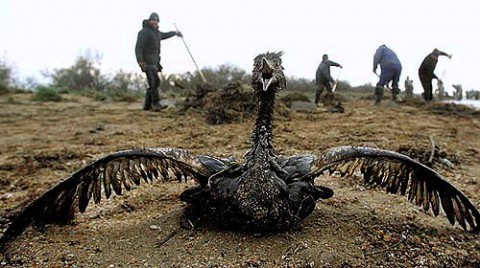 As you may or may not have heard by now, a circuit judge has overturned the Obama administration’s moratorium on further deep sea oil exploration in the Gulf of Mexico. According to the Associated Press, Judge Martin Feldman based his decision on the opinion that, despite the fact that the Gulf of Mexico and the coasts of Lousiana, Mississippi and Florida are experiencing the worst man-made ecological disaster they have ever endured, and despite that it has become amply clear that no technology exists to stop a deep water spill of this nature, and despite the fact that endemic corruption has completely undermined the effectiveness of the Minerals Managment Service, and despite the fact that oil companies have been allowed to draft their own equipment inspection reports for rubber stamping by corrupt MMS officials,  “…the Interior Department failed to provide adequate reasoning for the moratorium. He says it seems to assume that because one rig failed, all companies and rigs doing deepwater drilling pose an imminent danger.”

Oh yeah, there’s also the tiny matter of the Judge’s financial ties to the oil industry… Recusal? What the hell is that?

Serolf Divad
3:58 pm • Tuesday • June 22, 2010
comment »
Choose Your Delusion
Looks Like He Picked the Wrong Week to Quit Keeping His Mouth Shut The Best Part of Waking Up
17 Comments
Dodgerblue

Sweet FSM, this is depressin’.

“I hereby order all oil drilling to resume immediately, and my bank account number for receiving wire transfers is 6514 2371, just in case anyone’s interested,” (wink, wink) the judge proclaimed.

Those radical birders from the Audubon Society! How dare they stand on public property!

Weren’t there people who used to scream bloody murder about activist judges? What ever happened to them? Oh yeah, they appointed their own activist judges and turned the judicial branch into a subsidiary of the Chamber of Commerce.

Dear Louisiana and Mississippi,
Don’t come crying to us for Federal aid to help you recover from this and the inevitable future environmental disasters, you greedy, stupid, short-sighted fucks. That would be socialism, and we know you don’t want that.
Fuck you very much,
Blue States

@Mistress Cynica: Too late. They’re already cryin’, and anyway, everyone knows it’s only socialism when someone else has their hand out.

I’m post-verbal. All I can articulate on this topic is “stupid, stupid, stupid, stupid, stupid…” I realize this just makes me part of the problem, but what I really need right now is to just get on the petrochemical-consuming jet plane that’s going to take me away for my upcoming vacay right. this. minute.

@IanJ: I am now officially only sorry for the wildlife injured in this debacle. People suck. Those morons in MS and LA have completely exhausted my admittedly short supply of empathy for human beings.
God, I need a drink.

@Mistress Cynica: Run, do not walk, to the the Cocktail Corner.

How many licks does it take to get to the center of a Xanax?

Am I the only one that gets all stabby when reading the details of the injunction? From the MSM coverage (nevermind Faux News), you’d think it was a ban on *all* offshore drilling. Instead, the Repugs and the brownshirtsteabaggers are flipping out about 30ish wells out of 3600, claiming it will destroy massive numbers of jobs.

FFS, they grounded *every* F-15 after one had an in-flight failure a few years back – why should something as complicated and dangerous as deepwater offshore drilling be any different?