Shocked to find gambling going on! 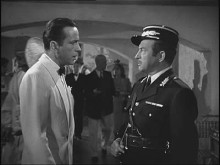 In one of the more memorable scenes of Casablanca, French police captain Louis Renault feigns shock at the uncovering of a secret gambling room at the rear of Rick’s Cafe Americain. Just moments later, with perfect comic timing, an employee of the establishment walks up to Renault and hands him the proceeds from his winnings that evening.

I couldn’t help but think of this moment when I came across a story in Slate’s news digest section titled “Partner in damaged oil well slams BP for ‘reckless’ actions — and inaction.” According to the article, which was published in the Washington Post:

BP’s three-front oil spill war — on the seafloor, on the Gulf Coast and in Congress — turned into a four-front battle Friday when its main partner in the damaged exploration well blamed the oil giant’s “reckless decisions and actions” for causing a disaster that was “preventable.”

It was the first time since the blowout in the Gulf of Mexico that Anadarko Petroleum had given its view of the accident, and its chief executive, Jim Hackett, did not mince words. In a statement, Hackett said he was “shocked” by information that has emerged from investigations of the accident. He said it “indicates BP operated unsafely and failed to monitor and react to several critical warning signs during the drilling of the Macondo well.”

Is it shocking to read something like this from a company that was intimately familiar with both the well and BP? Perhaps not as much as one might suspect. The article continues:

Hackett’s comments have huge financial implications. As a 25 percent partner in the well, Anadarko would ordinarily be responsible for a quarter of all cleanup and damage costs. But, Hackett said, “BP’s behavior and actions likely represent gross negligence or willful misconduct and thus affect the obligations of the parties under the operating agreement.” He said Anadarko would donate to charity and civic groups any proceeds it receives from the sale of oil collected during the cleanup.

Ah, so what we’re really got here is a case of rats attempting to flee a sinking ship. Of course, you might wonder: where were Anadarko’s newfound concerns while BP’s well was pumping and the profits were flowing as fast and free as the oil that is now pouring into the Gulf of Mexico? And, if you’re a 25% beneficiary of profits from an operation, and potentially 25% liable for the consequences of a malfunction, do you not have a duty to verify the safety of the operation?

In the coming months, as the true magnitude of the costs to the region, the environment and the people of Louisiana, Mississippi and Florida becomes known you can expect attempts by all the major non-central actors in this drama to distance themselves from BP and their own responsibiliy, as Ansdarko is trying to do now. Companies from Halliburton (whose failure to adequately cement the well) to Transocean (the company that owned the oil platform) will surely echo Anadarko’s insistence that liability for the disaster falls squarely and solely on the shoulders of BP.

Well, as execrable as BP has shown itself to be, neither U.S. lawmakers not the American public can allow the ancillary players to simply wash their hands of responsibility in this matter. The reasons are manifold, but two stand out: (1) The damages in this case may prove greater than even BP itself can shoulder (there is talk of bankruptcy) and (2) allowing BP’s enablers to walk scott free sends a horrible message to the oil industry. It tells all the secondary companies  all their investors that they have absolutely no responsibility  (and no liability) to ensure that they are supporting safe and environmentally responsible operations. It is a terrible precedent to set.

No, the truth is that every company that helped enable this disaster, from Anadarko on down should bear a substantial piece of the pain. If that means that some of them do not survive due to their economic liability then so be it. It is a small price in comparison with the devastation that this spill will wreak on the Gulf Coast region.

Anandarko, here is my parting wish for you: may 10,000 blood sucking lawyers descend upon your assets and bleed you dry.

Serolf Divad
9:00 am • Sunday • June 20, 2010
comment »
Choose Your Delusion
Paranoia, the Destroyer This One’s For You, Tony
2 Comments
ManchuCandidate

Out out damn spot spill.

Proceeds from the sale of the oil collected? Right now, they are burning the oil, the only proceeds of which are air pollution.