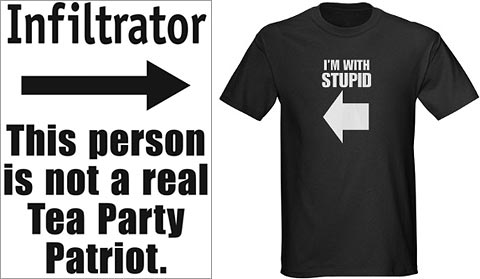 Right: We suggest that infiltrators wear this tee next to teabaggers.

How to spot and tag a Tea Party infiltrator [Malkin]

that Michelle Malkin, always thinking one move ahead.

this is for her

@Capt Howdy:
Should be played at 5am every morn in her neighborhood.

It’s easy to tell the infiltrators from the tea party protesters. No Cheeto dust, too thin, and their clothes fit.

Frienda mine went to the Teabagger rally in Sacramento, CA and reported that the crowd was mostly old white folks. I wonder how many of them are collecting Social Security (“social” as in “socialism,” get it?) from that Kenyan Muslim?

@Dodgerblue: Which, since Social Security is pay-as-you-go, we are underwriting.

@nojo: They probably don’t know that, but think that they paid the premiums, by God, and are reaping the fruits of their own hard work. Because that’s not socialism.

Lord God, a teabagger rally in Sacramento? Hah, did they bring oxygen masks in case these people forgot to breathe? Anybody get arrested because they got hungry yet confused and tried to stuff the chili dog in the wrong end? “Sacramento Teabagger”. Has the same ring to it as “Anencephalic Idiot”, doesn’t it?

@Dodgerblue: And please note, to those two decades behind me: Work hard. The fogey-wage slave ratio is increasing, and I don’t want yer lazy asses cutting my bennies.

@nojo: Yeah, and can we retire at age 60 like those lazy-assed Zorba the Greeks? Man, I’ll bet the Germans are piiiiiiiiiised at having to bail out those Southern Mediterraneans.

@Tommmcatt Loves The Giant Floating Head: Wait ’till SFL weighs in on this one.

@Dodgerblue: My retirement plan is to work until I die.

The teabaggers rallied today in the East Bay wasteland exurb of Pleasanton at the [socialist county-owned] Alameda County Fairgrounds accessible by [socialist] Interstate 580, and where they got to hear Carly Fiorina explain how her fantastic management experience at HP qualifies her for the U.S. Senate, got to hear the white rapper “The Conservative Kid” from Hayward, and unfortunately for them, did not get to hear from Orly Taitz who had been unceremoniously dumped from the line up yesterday.

@SanFranLefty: Orly! What happened to our Orly! Not too crazy for Pleasanton teabaggers — tell me it’s not so!

You can just play a tape of Ariana Huffington at double speed and you get the same effect.

@Tommmcatt Loves The Giant Floating Head: Whose claim to fame is that she married a rich gay guy and took his money.

I remember her as Ariana Stassinopolous (sp? WTF) desperate for fame on the Brit version of 20 questions. So what’s the solution? Marry mega rich closet case and remake self as one of those dim countess sluts in that Proust thing.

@Tommmcatt Loves The Giant Floating Head: I remember her as some right-wing nut job in CA whose husband was trying to buy a seat in Congress. Yes, Orly is Ariana on speed meth. (No offense to The Crystal Method.)

Quick googling reveals that she was considered an anti-feminist in the 1970s. She wrote a book called “The Female Woman”, apparently a textual debunking of feminism from a zooological perspective. One critic wrote ‘She has misunderstood – or more likely, deliberately distorted – the mainstream ideology of the women’s movement.’

She used to be quite the wingnut. Here’s another quote, this time from the woman herself: ‘I’m asking people to grow up, to take responsibility for their lives again. It isn’t burning your bra, it’s burning the nappies we’ve let the State put on us.’

Scanning desperately for a quick hit on the turning point in her politics is fruitless…must look further at home.

Benedick, do you remember that she had her own show on the BBC? It lasted four weeks….

“[a new-found religion] did not, however, stop her from embarking on a biography of Maria Callas and signing up as co-host of the BBC’s Saturday Night at the Mill.

The two appeared at once. The show was a disaster and she was pulled off after four weeks as viewers jammed switchboards with complaints about her accent, her haughty manner and her habit of kissing everyone.”

This is starting to fascinate me…

@Tommmcatt Loves The Giant Floating Head:
Adrianna was converted to the dark side by none other than Al Franken (and the only wingnut he did not make fun of in his book “Rush Limbaugh is a Big Fat Idiot.”)

@JNOV: She switched wings. She is bi-avian.

@ManchuCandidate: And that would be following their Strange Bedfellows tour, correct?

ADD: I briefly recall her in bed with Bill Maher, was that the 2000 election?

@nojo: Speaking of which, I caught the Timothy Leary part of the Leary-Liddy tandem tour in college. Managed to drank tequila with the guy, angling to get him to either sit for an interview with me for my alternative fishwrap or at least do a radio interview on my late night show.

He accepted neither, so instead I had a friend interview me about drinking tequila with Timothy Leary. His favorite band? Quarterflash. He was an ass – but I palmed his shot glass at the end of the night, anyway.

For an older lady, I think that Adrianna is a rather handsome woman but a very odd one.

The New Yorker had an interesting profile of Arianna a couple years ago.

@Nabisco: A buddy of mine in college was on the event committee, and worked in wrangling the speakers. He had some alone time with Abbie Hoffman, and my buddy had spent some time with my parents, and knew what would shock them, he had Abbie write a note to my parents, “Dear Mr and Mrs Prommie, don’t worry, your son (my secret name) is with us now, yours truly, Abbie Hoffman.”

I lost it years ago, dammit.

@Tommmcatt Loves The Giant Floating Head: Yeah. She’s psycho. And a fame whore. Once in a while a friend will write for HuffPuff, and I’ll be kind of conflicted.

@Nabisco: How is it you have this life? Please help me find one. My question du jour is do I line knitted bikini and halter tops or just give the customer two Band-Aids?

Or just one Band-Aid and call it the Morrissey Special!

@Promnight: Nabisco Bro (who’s a lurquer here, I’m led to believe…) called me once in the 80s when he was holed up with Hoffman in some enviro-standoff over a pump along JNOV’s eastern flank. A note like you got, however, is teh awesome. I didn’t get a picture with Leary the Lush (who carried camera phones then?), lost the shot glass and all I’m left with is the story – told endlessly.

@JNOV: Line them with pantyhose. Isn’t that what they use in regular (i.e. non knitted) bathing suits?

What type of thread/wool do you use for a bathing suit?

@SanFranLefty: Ima (<– this is Tomm's fault) use mercerized Egyptian cotton — it doesn't give much, so there shouldn't be a wardrobe malfunction if they get wet. I've decided to line them with fabric from high-thread count Egyptian sheets — sheets are less expensive than buying fabric from the store, and I think it'll feel nice against the nipples skin.

@Nabisco: Haha! Here’s a music-related marketing ploy. Somehow I got sucked into a local band’s orbit, and they throw presents to the audience at the end of their shows. I’m going to donate some tops (tagged with my Etsy info, of course), and I’m trying to get the lead singer to wear one. He says he doesn’t do drag anymore, but I think he should.

@Nabisco: Oh – hey. I you’re bringing the Ma and the Biscuits this way, my friend is doing a Donkey Kong tourney this summer at The World Cafe. They’re going to show King of Kong, only one of The Best Movies Ever, and then launch into the tourney and the Nintendo cover band will play later. Last time the movie started at 5, so the Biscuits wouldn’t be out too late.

Alls I got is Michael Spinx’s autograph before Joe Frazier kicked me out of his gym.

@JNOV: we have such an interesting past, and the arc of our professional and personal lives are so similar.
firstly, WTF were we even doing in that part of town, much less in joe’s gym! and i’ll ask again how he threw you out as he can barely speak, he’s so punch drunk. i remember you telling me what he said, and it cracked me up. he flailed his arms about and said_________.
(tell me again)

@JNOV: That’s pretty awesome right there. Larry Holmes once caught me skipping school*, told me and my buddy to get back to the books. He wasn’t champeen yet, but he already had a driver.
*to my eternal geek cred, we were headed to the public library.

@JNOV: It’s on, like Donkey Kong, then. They like the city, except when I mutter to myself at every phcking philly phan phlying their baseball phlannel.

@baked: I can’t remember what he tried to say, but when he grabbed my arm and threw me out the front door, his message was pretty clear. Fucker.

@Nabisco: This’ll be cool. The party/show/whatever will be right outside Center City near Penn. I’ll let you know when they hammer out the details.

@Nabisco: James Garner once pinched me on the cheek. I think. I was four. It was a celebrity golf tournament. I have better memories of the ice cream.